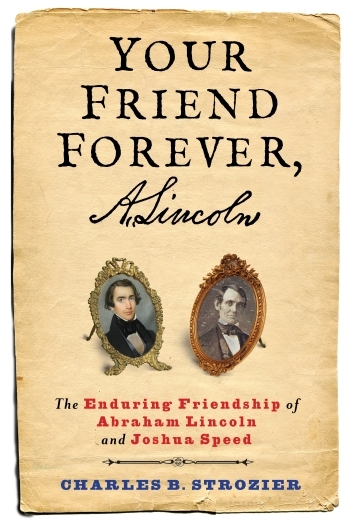 “I’d been working on Lincoln since 1973. But he’s such a profound man with such a wonderful sense of humor, so appealing, so he draws you in. He’s such a brilliant writer. Every story about Lincoln, whether it’s in the oral history, whether it’s something he wrote, it’s always interesting. He’s just an appealing human being. I don’t think he was so modest. On the other hand, he wasn’t wildly grandiose. There’s a difference. He was aware of his own greatness.” — Charles Strozier

This week, our featured book is Your Friend Forever, A. Lincoln: The Enduring Friendship of Abraham Lincoln and Joshua Speed, by Charles B. Strozier. Today, for the final day of the feature, we are happy to present an excerpt of Strozier’s interview with Ronald K. Fried at The Daily Beast. Read the interview and accompanying article in full on The Daily Beast‘s website.

[Ronald K. Fried] spoke with Strozier at his Greenwich Village psychoanalytical office. The following is an edited version of [their] conversation.

RKF: How common was it for men to share the same bed during Lincoln’s time?

Charles Strozier: Very common. One guy has counted 14 people—men— Lincoln slept with before he slept with Speed. Inns at the time were really just homes where they finished the loft. They weren’t hotels like we have now. They were just hostels, where you have the men over here and the women over there. But individual biography is not always congruent with social custom. The fact that it was common for men to sleep together doesn’t mean that it was of no significance that Lincoln at this crucial moment in his life slept for nearly four years with his absolute best friend. The question is, what does it mean?

Friendship between men in Lincoln’s time was very different, right?

I think the historical context is really important to understand. Now where homosexuality is so much more accepted, legitimated, and even affirmed as it should be in gay marriage, we accept males loving one another and being sexual with one another. But in the 19th century, the taboo of homosexuality is absolutely rigid. Whitman was gay. He had to stay in the closet. Sodomy, buggery, was illegal and severely prescribed. But friendship, intimate, loving friendship like that between Lincoln and Speed, was not only accepted but encouraged as the long as the boundary against sexualization was rigidly and absolutely maintained.

But couldn’t you say that homosexuality was so severely punished that Lincoln—if he were gay—would have had to hide it?

Of course. It’s a perfect reasonable question, and that’s why I had to look at the evidence for whether or not it was legitimate. And, of course, it’s hard to answer a negative. First of all, Herndon [Lincoln’s eventual biographer], who lived in the same room for two years [with Lincoln and Speed], not only never mentioned it, he never had a clue. And no one would have been more interested in anything homosexual about Lincoln. Not a single person Herndon talked to mentioned it.

Would you say that Lincoln’s friendship with Speed was redemptive and got him through his depression?

It kept him alive. It literally kept him alive. Lincoln was in very bad shape when they got together and the sort of easy, loving relationship that they established and the closeness, provided solace for Lincoln in what was a cruel world. Lincoln did not let people in. And he was very guarded with women. The only women he was close to were older married maternal figures with whom he could feel safe with. But Speed provided a safety, a security, a loving relationship. And I think it was loving in the way that Aristotle talks about loving between men, real friendship between men. I think Speed was the only person with whom Lincoln talked honestly about what he was feeling.

Do you think that Lincoln might not have made it through his depression if not for his relationship with Joshua Speed?

How do you characterize Lincoln’s relationship with his wife, Mary Todd Lincoln?

I don’t think there was any question he loved Mary. Mary was a very impressive, interesting young woman. She soured as an older woman; she was troubled in life, and basically unable to deal with the death of the children and just with life in general. And although Lincoln loved her, he did pull away after the first decade when their children were born. But I also think he was never really as close to her as he was to Speed.

Is that sort of closeness between heterosexual men something that’s gone today?

Yes. I don’t think we have it. If you have relationships between men who are that close, they are likely sexualized. The tension isn’t there.

What do you mean, the tension isn’t there?

Well, the tension of closeness. I really think the evidence suggests it wasn’t sexualized. But it was loving and close. There had to have been some physical tension if you sleep in the same bed with someone for four years.

Yes and both men were in their twenties when the arrangement began. That’s a lot of testosterone floating around in one bed.

That’s a lot of testosterone. You’re moving around. You have a wet dream. You slap your arm over.

You wake up in the middle of the night with an erection.

Sure. It has an element of physicality without being sexualized—and they loved one another! Speed was totally abjectly loving in his friendship of Lincoln, and Lincoln needed Speed in a way I don’t think he ever needed anyone else in his life again.

Let’s say that some undiscovered evidenced showed up that proved it was a sexual relationship, would that in anyway change your view of Lincoln?

Oh, of course. I mean, not to criticize him but his character, his identity, the deep secret he would have fostered, his relationship with his wife—it matters, this issue. It’s not an issue that you can sort of airily dismiss as irrelevant as some historians have. I think you have to grapple with it.

I was surprised at the distance between Lincoln and his dad. Lincoln didn’t invite his father to his own wedding. He didn’t go to his father’s deathbed and did not go to his funeral.

Thomas Lincoln was actually a perfectly decent man. He was impressive. He had a good sense of humor. He was quite sober as best we can tell. He ranked fairly well in terms of tax records. He attracted two very impressive women as wives. But Lincoln’s concept of him, I think, was that he was unworthy to be the father of a boy with such exalted ambitions.

Was he ashamed of his father?

I think he was ashamed of his father. He said in his autobiography that his father was only bunglingly able to sign his own name. So whenever he talked about his father he used derogatory terms.

How did your view of Lincoln evolve in the course of writing the book?

Of course, I’d been working on Lincoln since 1973. But he’s such a profound man with such a wonderful sense of humor, so appealing, so he draws you in. He’s such a brilliant writer. Every story about Lincoln, whether it’s in the oral history, whether it’s something he wrote, it’s always interesting. He’s just an appealing human being. I don’t think he was so modest. On the other hand, he wasn’t wildly grandiose. There’s a difference. He was aware of his own greatness.

What are the most important qualities that Lincoln had that are lacking in today’s leaders?

So obviously reading about Lincoln—he’s such a good writer, he’s so thoughtful—he does bring Obama to mind. Do you think there are parallels?

Oh yes. I mean, Dreams from My Father, I read that book back in the ’90s. I was astonished at that kind of search for self as a relatively mature man. You know, really trying to find yourself. You know Erik Erikson has said, “In order to make sense of one’s sexual identity, a man must come to terms with his relationship with his father. Erickson said that in the ’50s. I think in Lincoln’s case, he never did come to terms with his father. But he certainly came to terms with himself through his friendship with Speed. That was his salvation. Redemption. That’s the word I use. That’s a better word.

Read the interview and accompanying article in full on The Daily Beast‘s website.