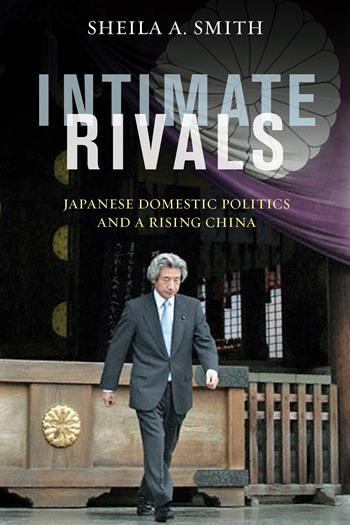 This week our featured book is Intimate Rivals: Japanese Domestic Politics and a Rising China, by Sheila A. Smith. In today’s guest post, Smith looks at recent events in Japan-China relations, and explains how they relate to her argument in Intimate Rivals.

Adjusting to the rise of China is not simply a task for diplomats or strategists. Rather, the adjustment to new centers of global economic and political influence involves a broad array of social actors.

Today, many in Japan worry about how to manage this complex task. Fishermen, scientists, oil and gas interests, and coast guards all converge on the East China Sea, and today, for the first time since World War II, their interactions could prompt an escalation of tensions to include the Japanese and Chinese militaries. But there are also interests across Japanese society that feel the impact of this transforming China, and Intimate Rivals introduces the variety of advocacies that now shape Japan’s China policy.

Today more than ever, popular perceptions are shaping Japan’s interactions with a transforming China. In polling conducted over the past decades by Genron NPO and the China Daily, Japanese respondents reveal a gradually deteriorating view of China. In the 2014 poll, 93% of respondents had a negative view of China. Even more striking is the more recent evidence in the poll of a growing concern of the possibility of military conflict with China.

Of course, Japanese and Chinese political leaders hold the key to crafting a positive relationship. Last November, after yet another extended period of diplomatic standoff, Prime Minister Abe Shinzo and President Xi Jinping met at the Asia Pacific Economic Community meeting in Beijing, opening the way for a resumption of a host of other government meetings that manage this relationship between Asia’s two largest nations. The two governments must address the growing interactions between their societies, solving problems from criminal prosecution to fisheries management and facilitating the travel of millions of citizens that travel back and forth between the two countries.

The photo taken of President Xi and Prime Minister Abe last fall did not suggest that this most recent round of reconciliation will be easy, but it did bring to a close an extended diplomatic estrangement that compounded the danger of maritime conflict. In the months since, Japanese and Chinese officials have begun to address the risk of unintentional incidents in the East China Sea escalating into a much more difficult crisis, and the hope is that the two nations can build a sustainable mechanism for crisis management for the maritime space between them.

While this effort to build cooperation between Tokyo and Beijing resumes, however, the legacy of this new era of contention in their relationship is most conspicuous at home. New generations of political leaders in both countries now see greater opportunity in exploiting the tensions between them. Chinese nationalism has often been seen as a function of the Chinese Communist Party’s effort to legitimize its continued leadership of an increasingly diverse and contentious society.

But in Japan too the domestic balance of interests in support of a cooperative approach to problem solving with China has shifted as Beijing and Tokyo have increasingly failed to come to agreement over their differences. This is particularly important for those issues that highlight perceived vulnerabilities. My book looks at four policy issues where this matters most for Japan’s relations with China over the past decade or so: war memory, maritime boundary management, food security, and island defense.

Contention has become more frequent in Japan’s relations with China, but upon closer inspection of these policy challenges, I find a number of reasons for the declining confidence in Japan that their government can succeed in solving problems with China. On the surface, it would seem that many Japanese see China’s rise as eclipsing Japan’s role as Asia’s leading power, and thus anxiety about Japan’s future is part of the answer. But the more important impact has been the growing belief in Japan that China is not interested in a peaceful negotiation of their differences, not only with Japan but with others as well. The intense confrontation over their island dispute seemed to bring Japan and China close to conflict, and has revealed that the longstanding political channels of communication and confidence that had grounded the relationship in the past no longer existed. The growing worry in Tokyo is that China’s leaders are more interested in undermining the global order upon which Japan has based its postwar foreign and economic strategy.

Demonstrating that Chinese and Japanese leaders are capable of building a different kind of partnership will be crucial in the years ahead. Intimate Rivals suggests that the most important task for policymakers will be to build a track record of success in finding common ground. While there is no national consensus in Japan that organizes around the strategy of confronting China, it is clear that confidence in a cooperative relationship has suffered. Rebuilding popular confidence in the governments’ ability to protect their citizens’ interests will be a challenge.

Designing new approaches to building trust between the two governments is one crucial first step. Just a few weeks ago, the head of Japan’s Liberal Democratic Party (LDP) and its coalition partner, the Komeito, visited Beijing with the express interest of building party-to-party ties. In fact, these two Japanese political parties have had longstanding ties, but today they must forge new institutional arrangements with the current generation of China’s political leaders. Earlier generations of Japanese and Chinese political leaders negotiated the terms of their countries’ postwar peace, but today, a new generation of leaders must renew their commitment to finding common ground.

Beyond their bilateral ties, however, Japanese and Chinese leaders will also need to consider how they can work together to build regional institutions that will embed their relationship in a more stable and reliable pattern of cooperation. For all of the other Asian nations that have watched the growing tensions between Tokyo and Beijing, the past several years of contention have been alarming. Instead of investing in a future of competition, Chinese and Japanese leaders should begin to articulate and invest in pathways for cooperation that will create and sustain confidence in the region’s future.