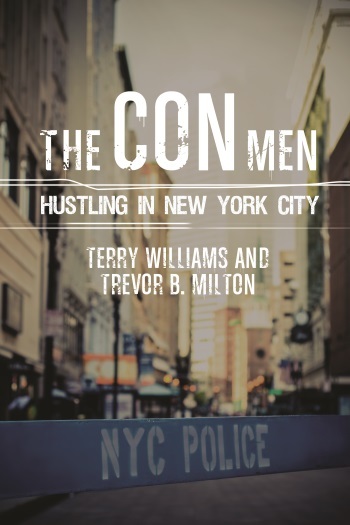 “This book came about because both Terry and I are New Yorkers who came here from other places. There are the known mechanics of this city, and then its underground economy. We came to The Con Men as a way of making sense of this untaxed and unauthorized world.” — Trevor B. Milton

This week, our featured book is The Con Men: Hustling in New York City, by Terry Williams and Trevor B. Milton. In today’s post, Trevor B. Milton looks back at the genesis of the book, and explains some of the key threads that tie the book’s many stories together.

Don’t forget to enter our book giveaway for a chance to win a free copy of The Con Men!

Themes from The Con Men
By Trevor B. Milton

This book came about because both Terry and I are New Yorkers who came here from other places. There are the known mechanics of this city, and then its underground economy. We came to The Con Men as a way of making sense of this untaxed and unauthorized world. There is something in this book for everyone who has ever resided in this city, something familiar to all who walk its streets. New York City is the unit of analysis; con artists and hustlers are the bi-product.

New York City is rugged, aggressive, and competitive, yet it is also one of the most desirable cities in the world, with broad boulevards, tree-lined avenues, yellow and lime-green cabs darting hither and yon, and frantic crowds moving along busy streets. And though New Yorkers constantly complain about trash, traffic, trains, and any number of other hassles, most of them readily acknowledge that they live in one of the greatest cities in the world. Among its many finer points, New York offers access to the best museums and cultural institutions and an intelligentsia unmatched anywhere. New York, New York: a city so nice they named it twice…

Those coming to New York seeking great fortune or world-class fame quickly learn the hard way that living in this city is a daily struggle; it requires a tireless work ethic in order to keep up, just to make ends meet. Every aspect of city life can be a grind, from the competitive job market, to the exhausting daily commute, and even to demanding relationships. New York City—massive, crowded, dirty, teeming with bodies—can be a nightmare for the human spirit. It is also a dream location for scientists looking to study the human condition. This towering metropolis or concrete jungle (whichever way you choose to view it) is the end result of centuries of social liberalism, capitalist expansion, herd migration, artistic experimentation, and the rampant street entrepreneurialism that stems from the constant struggle to survive…

The city is full of the “haves” and the “have-nots.” For the con man, if you cannot “have,” then you take. The con artist’s feelings toward this city are complex. Most con artists don’t so much hate the city as feel betrayed by it because it beckons with a dream but provides no realistic means to obtain it. In a sense, the American dream itself is a masterful con that suckers people in. So some come to realize that the only way to reach this mythological dream is to not play by the rules of the game but to devise a different game, a game of chance, a gambling game, a hustling game, a conning game, a pretender game, a now-you-see-it-now-you-don’t game. To understand the art of deception, you must see that it is essentially about changing the rules of the game and misdirecting the audience in order to “get over…”

Confidence artists—those who deceive in order to procure money or goods from unsuspecting strangers—perform a type of street theater that capitalizes on the fluid structure of the dense, diverse, and mobile city. They use their cunning to draw in the unsophisticated and then deploy a practiced anonymity to sneak away with the prize. These skilled craftspeople often take years to learn how to dazzle a crowd in one instant and disappear into the same crowd in the next….They used their verbal ability and charm to manipulate people into being victims. The con game is a social act and a social event that follows a predetermined series of steps…

Hustlers are the seasoned entrepreneurs of the city’s informal economy. They hold down jobs like most anyone else, but their jobs tend to be self-made, self-enterprising, and, of course, illegal. Hustlers are the self-employed vendors of legally purchased goods—or illegally made substances—sold through unauthorized means. Hustling…can include manufacturing and peddling homemade cocaine in after-hours clubs or on the street; selling stolen (“hot”) merchandise; selling counterfeit goods, such as handbags; selling wholesale merchandise, such as electronics, at retail prices; betting on games of chance (cards, dice, pool) in ways forbidden by the law; and participating in the underground lottery of the ghetto, known as policy or numbers. At the more felonious end of the scale, they can include petty pillage and theft; stealing cars; break-ins; scavenging materials such as bricks, copper pipes, windows, and door frames from abandoned buildings; mugging; stickups; pimping; racketeering; extortion; and the wholesale and retail trade in drugs.