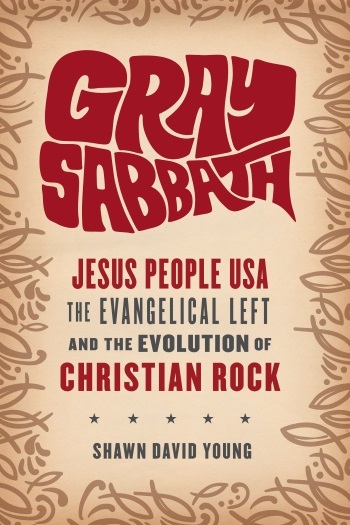 “For the life of me I cannot understand how religious certainty continues to translate into political certainty. Yes, the faithful (if true to their belief) will certainly channel their ideas in a way that informs public policy. But when people of faith hold myriad interpretations of matters cosmic, how can they effectively engage matters that have global implications?” — Shawn David Young

This week our featured book is Gray Sabbath: Jesus People USA, the Evangelical Left, and the Evolution of Christian Rock, by Shawn David Young. In today’s post, Young looks at the history and the future of the complicated relationship between evangelical Christianity and American politics, paying particular attention to the way that evangelicals will affect the upcoming election cycle.

Don’t forget to enter our book giveaway for a chance to win a free copy of Gray Sabbath!

An aging hotel looms over a street packed with cars, pedestrians, and sidewalks. A man stands near, asking for spare change. Others hustle by, talking to themselves. Sirens. Car horns. Music blaring from cars. Jaywalkers weaving in and out of cars on the street, eager to make way to the other side. Sporting a blue awning with white lettering, Jesus People USA’s building (quaintly named “Friendly Towers”) conveys a welcoming message, complete with psychedelic images in the windows. The front door opens to a hallway covered by an ornate ceiling—a relic of what was once a hotel—ending at a locked door; people are buzzed in by those holding post at the front desk. Regardless of the time of day, one can expect a mix of old hippies, young punk rockers, “goths,” and senior citizens. While an outsider might write the scene off as chaotic, it is readily apparent that all are members of a tight-knit community dedicated to shouldering the burdens of its members, many of whom display a certain sanguinity one might expect from utopian hopefuls. This community is about Jesus. But it’s also about discovery.

America’s founding fathers understood the value of place. Roots are important, as are the ineffable connections we create, tethers that ground us to the land. For all our hemming and hawing over our personal “space” (flag-planters staking claim), we Americans still crave organic interplay. This is a tension, one that lives between the human need for personal identity and communal safety. In many ways, this struggle is played out in a theatre of competing political and religious belief. And it is also revealed in this urban group of believers nestled in one of Chicago’s poorest neighborhoods.

As a preacher’s kid, I was too close to the church (at least in my own mind) to warrant any objective analysis of that prickly conversation piece called “religion.” Now as an academic, the questions flow pretty regularly. (Sometimes too regularly.) In recent years I have obsessively pursued the matter of religious certainty, particularly as it applies to public life. For example, why did so many evangelical Christians follow George W. Bush into a two-term presidency, one now hotly debated in the era of post-9/11 policies? Does it even matter? And is it possible that personal religious belief—writ large—contributed to current debates about marriage equality and carbon pollution? And (here it comes) now Congress appears more divided than ever in the wake of the Obama presidency. Evangelicals? What? Who?

They’ve enjoyed certain traction when the debate moves to the so-called culture war. And yes, they have been on the rise, while mainline, liberal denominations have been on the decline. Evangelicals are on the move and the political candidates know it! Stated plainly, young people (young voters) are profoundly attracted to the evangelical version of Christianity.The loaded mixture of contemporary rhetoric, aesthetics, and religious certainty has been catnip to the waffling youngster exhausted by the shifting sands of pluralism – a plus for these evangelicals who owe their growth to a bunch of hippies. But how?

The war in Vietnam raged; the anti-war movement swept college campuses; the civil rights movement was thoroughly under way; love-ins, sit-ins, and be-ins became commonplace among the flower children; sex, drugs, and rock ‘n’ roll fueled a Cultural Revolution. It was the Sixties. But something else happened amidst what is often considered the decline of Western civilization. As the Revolution grew, so did a new version of evangelical Christianity, one linked to the counterculture. During the late 1960s there was a revival of conservative evangelicalism among youth in the U.S. While this included youth from a number of backgrounds and traditions, hippie Christians entranced media to the point of making headlines with major publications such as Time and Life. Commonly referred to as the “Jesus movement,” the revival challenged traditional Christian aesthetics while embracing a conservative interpretation of the Bible.

Yes, hippies still exist. Jesus freaks still exist. But while “freaky” evangelicals have long escaped our collective curiosity, the legacy that was the Jesus movement (its fingerprint) can be seen in music, film, fashion, and the general ways in which contemporary evangelicals approach the value of aesthetics. Jesus People USA and the Cornerstone Festival strike me as otherwise curious examples of evangelical Christianity. And I can’t help but see in them a microcosmic example of America’s future. Yes, a number of these folks have embraced a kind of “left-wing” humanitarianism, a position not often associated with evangelicals. But if evangelicalism is anything, it is a movement that seeks to become all things to all people. And this includes innumerable expressions of belief that incubate beneath our mainstream radars. For Christianity, this is a good thing. Or so it would seem. But for those for whom subjectivity is America’s death knell, ironclad political and religious certainty (for some odd reason) is a beacon to be followed, a savior that murders the bespectacled phantom of intellectualism.

For the life of me I cannot understand how religious certainty continues to translate into political certainty. Yes, the faithful (if true to their belief) will certainly channel their ideas in a way that informs public policy. But when people of faith hold myriad interpretations of matters cosmic, how can they effectively engage matters that have global implications? And will the coming election be marked by evangelical cultural belief?

Evangelical Christians (and a number of other belief systems) have been on the cusp of a change, one that might allow pluralism a foothold, which could mark the beginning of a new sort of revival. But the rapid growth of individualism, the compressing of evangelicalism and nationalism into an identifiable whole, and the commercialization of popular evangelical music, all still demonstrate that a sizable number of evangelicals have swiftly, and by way of capitalism, launched a counter-assault to postmodern belief. So what does the future hold? Let’s hear what the music has to say.