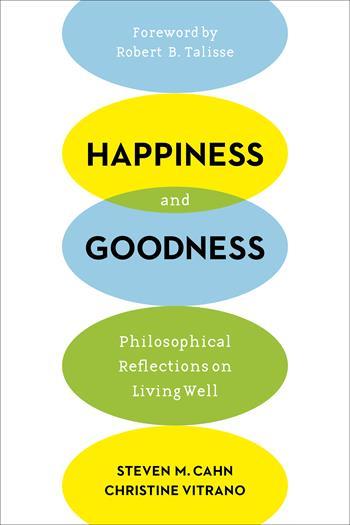 “Whether one decides, in essence, to be a beaver like Pat or a bear like Lee is a personal choice. After all, a life devoted to simple pursuits may yield as much satisfaction as one given to complex undertakings. That insight doesn’t imply that arduous tasks are to be avoided, only that those who engage in them may not live better than those who don’t.” — Steven Cahn and Christine Vitrano

This week our featured book is Happiness and Goodness: Philosophical Reflections on Living Well, by Steven M. Cahn and Christine Vitrano, with a foreword by Robert B. Talisse. In this final post of the week’s feature, we have an excerpt from the concluding chapter of the book, “Concluding Questions.”

Don’t forget to enter our book giveaway for Happiness and Goodness!

Be Good and Enjoy

Let us now return to the two fictional cases with which our discussion began: Pat and Lee. Pat, you may recall, is a successful philosopher who is happily married and enjoys playing bridge and the cello. Lee did not attend college, is single and financially independent, makes philanthropic gifts, and enjoys sunbathing, swimming, and surfing, along with freely spending money on a variety of luxurious items, including homes, cars, and golfing holidays. Both treat others with respect and are satisfied with their lives.

Here are the questions we asked about Pat and Lee: Are both living well? Are both pursuing equally successful lives? Is either life wasted? We can answer now that both are living well, both are finding equal success in living, and the life of neither is wasted. We might admire one more than the other, but such a judgment would reflect our own preferences or purposes and not serve as an appropriate basis for determining whose life is well-lived.

We recognize, however, that others may not agree with us. Hence we shall raise and respond to their most likely questions.

First, do we claim that Pat and Lee are contributing equally to the welfare of society? No. Pat’s teaching, research, and service are unmatched by any activity of Lee, although Lee’s contributing money for worthy causes should be applauded. Thus if the question to be answered is which of the two is a more valuable member of society, the probable answer is Pat. The question, however, is not whose life is more useful to others but whose life is going better, viewing happiness from the perspective of the person being assessed. Because both individuals are acting morally and finding satisfaction, both lives are going well.

Note, incidentally, that if importance to the life of the community were the criterion for living well, philosophers would rank below those who collect garbage, maintain piping for water, repair electrical equipment, make goods from raw materials, and grow and prepare food. Life will go on in the temporary absence of philosophers, but try to survive even a month without garbage workers, plumbers, electricians, and those who labor in factories, on farms, or in kitchens. Are their lives, therefore, better than those of philosophers? We don’t believe so. Living well should not be judged in terms of meeting societal needs.

A second question: Are we claiming that Pat and Lee are equally successful in terms of professional accomplishments? Obviously not. Pat has a series of notable scholarly achievements and is highly regarded by philosophical colleagues. Lee has no such record. Living well, however, is not determined by the length of your vita. While you may be renowned in your discipline (although probably unknown to those in other fields), you may still be deeply distressed, perhaps resulting from unresolved personal problems or continued frustration that you are not as celebrated as you would prefer. In either case, even though successful in one respect, you are not living well.

Third, does our view imply that an individual who is living well has no reason to undertake new endeavors? Not at all. As we stated at the beginning of our inquiry, a person’s life can be assessed in many ways, and nothing is amiss about valuing goals apart from living well. Thus Pat may undertake to write a new book, or Lee may plan to travel to a hitherto unvisited location. Pat may take up golf, while Lee may learn to play bridge. Indeed, either may grow weary of their present activities and embark on a new phase of life, perhaps involving greater effort or much less.

The essential point is implicit in a fable titled “The Bear and the Beaver,” authored by philosopher Charles Frankel, who taught at Columbia University, served as assistant secretary of state for educational and cultural affairs, and later was a founder and first president of the National Humanities Center. A bear who spends most of his time on vacation or hibernating meets a beaver who is always working hard at building dams. Each agrees to try the life of the other. The bear begins collecting twigs, knitting them together with mud, and putting them on logs he drags with mighty effort into the middle of the stream. Meanwhile, the beaver naps and relaxes. Finally after months of exhausting effort the bear decides, “I think I’ll go back and be a bear.” The beaver then looks at the bear heading for the hills and calls after him, “If you don’t mind, I think I’ll go back and be a bear too.”

Whether one decides, in essence, to be a beaver like Pat or a bear like Lee is a personal choice. After all, a life devoted to simple pursuits may yield as much satisfaction as one given to complex undertakings. That insight doesn’t imply that arduous tasks are to be avoided, only that those who engage in them may not live better than those who don’t. After all, if success in the most demanding intellectual activities were necessary for living well, then how
many individuals would have lived as well as Aristotle, da Vinci, Shakespeare, Bach, Newton, or Einstein? Yet while their achievements were monumental, matching their incredible output is not necessary for living well. Few have thought as profoundly as they, but many have lived at least as ethically and contentedly.

In any case, you can live well while striving to fulfill cherished ambitions, whatever they may be. The key to doing so is realizing that almost surely some will achieve more than you, while others will achieve less. If you can be satisfied with whatever you accomplish, you can attain happiness.

A fourth and final question is whether we are suggesting that living well should be everyone’s aim. Such is not our view. Dr. Martin Luther King Jr., for example, had an enormous impact on his own and future generations. Had he been deeply dissatisfied with his life, as we believe is contrary to fact, then he would have been putting the welfare of others ahead of his own interest, sacrificing the opportunity for personal contentment to benefit others. In that case, we would all be deeply grateful for his actions while recognizing the price he had to pay.

But wasn’t his life good? The question is ambiguous. If “good” means consequential or praiseworthy, then his life surely was good. If, however, “good” implies being satisfied, then had he been dispirited and dismayed by his life, it would not have been good for him, although it would have benefitted countless others.

The question arises whether we should think primarily of our own welfare and that of our loved ones or instead be willing to sacrifice our well-being for the good of others who may be unknown to us. The soldier who jumps on a live grenade and thereby saves comrades dies valiantly but relinquishes the opportunity to continue living. Such an action is supererogatory, that is, beyond the call of duty, and, while highly commendable, neither required nor expected.

In sum, living well is up to you, because your happiness is within your power, as is the decision whether to act morally. Granted, infrequently the two conditions might pull in opposing directions. In particular, a supererogatory action, serving others, could lead to neglecting your own happiness, or, on the contrary, a violation of an ethical guideline, neglecting others, could lead to serving your own happiness. In either situation, forced to make what may be a wrenching decision, you would be, as Jean-Paul Sartre writes, “alone, with no excuses.”

Fortunately such conflicts are rare. Usually living well is sensible, admirable, and preferable. Hence we conclude by echoing what we understand to be Koheleth’s advice, as astute today as when offered more than two thousand years ago: Be good and enjoy.