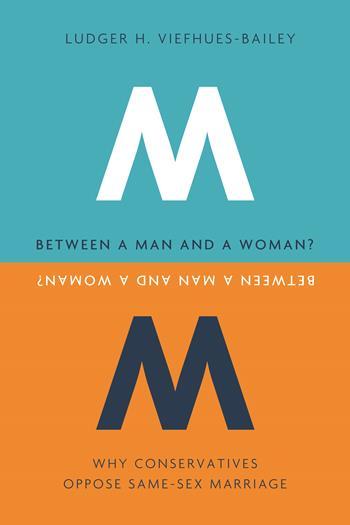 “Romantic love is thus not only a widely shared cultural idea, from Disney to Honey Maid commercials. It is a political idea: the freedom to chose one’s life-partner echoes and reinforces the freedom to bond together as a nation of equals, despite the fissures of class, race, or ethnic background.” – Ludger Viefhues-Bailey

Following today’s Supreme Court ruling that the Constitution of the United States guarantees a right to same-sex marriage, Professor Ludger Viefhues-Bailey, author of Between a Man and a Woman?: Why Conservatives Oppose Same-Sex Marriage, offers his thoughts on the decision and discusses where he thinks public debates about marriage equality go from here.

The Supreme Court has ruled and marriage equality is now the law of the land. Yet I doubt that we have the luxury of sitting back, toasting our entry into the marriage industry, and delegating conversations about religion, marriage, and the law to the uncomfortable privacy of the Thanksgiving table.

American Evangelicals and their rumblings on marriage equality will stay with us. This resilience is not simply because of the impact of their networks and numbers but because their resistance reflects a general uneasiness with the value of equality, one that is profoundly embedded in American political culture. Evangelical marriage theology only highlights and baptizes a wider American desire for a complicated mixture of both equality and inequality in shaping our body politic.

The history of marriage in the U.S. is indeed an excellent place to study this complicated union of equality and hierarchy.

In its history and in popular culture, marriage is in fact an institution allowing for the fulfillment of romantic equality while simultaneously promoting a stratified society. On the one hand we tell the story of romantic love by imagining that we could just marry anyone and that love is blind to status, class, or race. On the other hand, we police what counts as respectable marriages and who is allowed to have them. If anyone wishes to promote marriage as a particularly traditional American institution, they would need to focus on this tension between equality and inequality.

Historians of marriage, like Harvard’s Nancy Cott, tell us that the ideal of romantic equality is profoundly connected to the self-understanding of the American revolution: the new Republic should be based on a bond of equals, just like the marriage bond was one between equals who desire to be together. Thus, it is not surprising that we find during the struggle for American independence a host of pamphlets praising the state of marriage, which is seen as the emblem of free attraction and mutuality of interest.

The ideal of the romantic bond of marriage that is based on free assent became popularized over the years, so much so that it was experienced as a particularly American institution, as the court acknowledges. Immigrants to the U.S. praised American as the place where they can freely chose their marriage partner and sociologists of American small town life concluded that in the period covering the late 1800 to the early 1920s, romantic marriage was seen as the glue that holds society together.

Romantic love is thus not only a widely shared cultural idea, from Disney to Honey Maid commercials. It is a political idea: the freedom to chose one’s life-partner echoes and reinforces the freedom to bond together as a nation of equals, despite the fissures of class, race, or ethnic background. As the Alaskan Judge Peter Michalski stated already in 1998, “the relevant question is not whether same-sex marriage is so rooted in our traditions that it is a fundamental right but whether the freedom to choose one’s life partner is so rooted in our tradition.” Judge Michalski here relies on the romantic ideal of freely chosen love. Given how central this ideal is to the formation of American citizenry, it is clear that the state has an interest to protect and foster this freedom of choice.

However, equality in romantic love is only one element of American marriage. The other is respectability and sexed stratification. As soon as the Republic was founded, marriage was discussed in terms of differences between the sexes such that women are virtuous keepers of the household and men lawgivers in the polity. And marriage legislation turns into the battleground of who is and who is not a full citizen of these romantically United States. Marriage laws were designed to keep African-Americans or particular groups of immigrants out of the body politic.

Why is marriage of such importance? Because it is symbolically and literally invested in the reproduction of what counts as a desirable and “respectable” society. In policing the culture of marriage we announce who is allowed to be fully American and who is not.

Evangelical Christian opposition to marriage equality connects with this part of the traditional politics of marriage, namely the configuration of respectable sexuality as a tool to organize and stratify the body politic.

If we read their marriage theology carefully we see that while Evangelicals promote somewhat the equality of the sexes, they also emphasize their complimentary and hierarchization. Men and women are created equal but at the same time they have to fulfill separate roles in marriage and family and with these roles come different places of power. The wife as team player, or executive vice president, or second in command— these tropes are used in conservative Christian literature to make clear that she has to subordinate herself into a clear line of command. Although this does not imply that she has no authority, the wife has to obey her husband’s wishes, or the entire family will fail. Women in this context will get messages of empowerment and of disempowerment at the same time. A message that is certainly not unfamiliar to many American women, whether they identify as Evangelicals or not.

Since, as the court states as well, the sexual order in marriage organizes the larger social order, we can see that at stake in conservative religious resistance to marriage equality is an investment in maintaining a stratified and hierarchical society. And this investment is not only a concern for Evangelicals. Their sexual political theology expresses clearly the conundrum of equality and dominance characterizing modern democratic governance in general: on the one hand we are all supposedly equal – on the other hand we clearly see and promote structures of political domination in terms of class, race, and yes sexuality. Social and political power is not equally accessible to all. In this sense the insistence of conservative Christians that social life should not be completely equalized may reflect our reality by providing a theological political framework for the normativity of the factual.

In sum: conservative Christian resistance to marriage equality will remain with us as a resistance against a social order that is fully invested in equality. Like, the lasting cultural opposition to interracial marriage we will continue to see religiously inspired resistance to full gender equality in the reproduction of the state.

Thus, the wider theological and political battle of balancing sexual equalities and hierarchies will remain. At the heart of this balance lies the problem of reproduction of the state – not just figuratively but literally. What does it meant to share the burdens and responsibilities of the bearing and raising of children in a neoliberal capitalist society that is deeply influenced by the paradigm of the market and the pursuit of individual profit. Thus the next frontier of religious-political conflicts will be debates focusing on how to distribute socially the responsibilities and burdens of reproduction. Stay tuned; conservative Christians will have something to say about that.