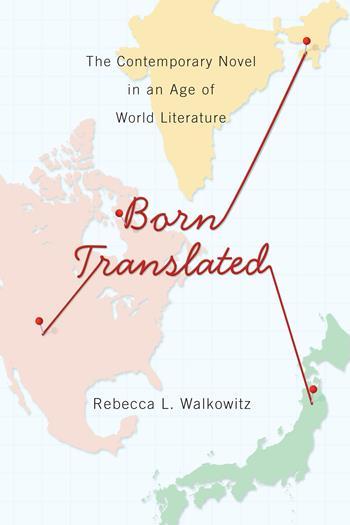 In Born Translated: The Contemporary Novel in an Age of World Literature, Rebecca L. Walkowitz argues that translation should be understood as the engine rather than the caboose of literary history. She analyzes the ways in which contemporary novelists such as J. M. Coetzee and Jamaica Kincaid incorporate the themes, forms, structure, and visual devices of translation in their works to tell this story.

Question: What is a “born-translated” novel?

Rebecca Walkowitz: I call some contemporary novels “born-translated” because they have been published simultaneously, or almost simultaneously (within a few weeks or months), in several different languages. For a long time, we’ve assumed that all books begin in one language, often called a “native language,” and then travel out to other languages. This is how we’ve expected “world literature” to work. But today, many books begin in several languages—they start as world literature—and this is especially true for novels that are written in English. In my book, I am interested in how Anglophone novels have begun to reflect on this situation, embedding their existence as translated works into the stories they tell and even into their structure and style.

Q: How does this affect the way contemporary novels are written?

RW: From the perspective of fiction-writing, the fact that novels will appear in translation right away has changed the way writers use language. Kazuo Ishiguro has talked about his efforts to design his books around structure and narrative architecture rather than around individual phrases or puns. David Mitchell’s novels often tell us about the presence of foreign languages on the page rather than representing them directly (through direct quotation or inflected dialogue). We can see in Ishiguro’s and Mitchell’s novels a focus on narrating languages—describing their relationship to other languages, explaining how they circulate and who can use them, observing which characters understand them and which don’t—rather than a focus on playing with them or reproducing their characteristics on the page. Ben Lerner has noted that his novel Leaving the Atocha Station, about a young American’s experience of learning Spanish in Madrid, emphasizes the encounter with a language one does not understand rather than the “surface effects” of that language. In Jamaica Kincaid’s work, the reader is asked to think about the words they are not reading, because they have been spoken or thought by someone who does not have access to literacy or publication. These novels represent the different ways that characters speak English and other languages by explaining those differences, by telling us about the historical and political conditions of language education, and by developing generic, syntactical, and visual cues that can communicate multilingualism in multiple languages.

Q: Hasn’t the phenomenon of novels appearing in multiple languages been going on for a long time?

RW: To be sure, there have been influential works in translation for many decades, and in fact for many centuries. But the scope and scale has changed, and this has altered the way that many contemporary writers think about and produce their work. To take a famous example: the international bestseller Don Quixote, known for its exceptionally fast absorption into many languages, took 51 years to find its way from Spanish into five additional languages. It took 164 years for Cervantes’s novel to be published outside of Western Europe. By contrast, between February and December 2013, J.M. Coetzee’s novel Childhood of Jesus was published on five continents in nine languages, including Chinese, Polish, and two versions of Portuguese. Moreover, the novel first appeared in Dutch, even though it was composed in English. But novels such as Coetzee’s don’t simply appear in translation. Questions of language or translation are baked into the work. The main characters in Childhood don’t seem to know—or even recognize—English. Readers in English are asked to imagine a world in which English is so distant, or so insignificant, that characters can confuse it with neighboring tongue (as they do). To take another example, Mohsin Hamid’s well-known and much-translated novel The Reluctant Fundamentalist thinks about translation—and asks its readers to think about it—by using the second-person voice (the narrator speaks to “you”). This device encourages readers to confront their role as readers, in a world in which some people cannot read at all, and to consider the difference between being a reader in English and being a reader in other, less translated languages.

Q: If a novel begins in many languages, does that mean that its language doesn’t matter? Is the novel the same object whether it appears in English or, say, Estonian?

RW: No, the novel is not the same in every language. In fact, we would do well to think of the literary work as a collective object—made up of the many language editions in which it appears—rather than an object that is unique to the language of composition. Novels don’t belong to languages, intrinsically or naturally; they are written in languages. Indeed, the recent change to the Man Booker International Prize, from the recognition only of authors to the dual recognition of authors and translators, suggests that even public institutions are beginning to recognize that translated books are collaborative in nature.

Q: Do “born-translated” works challenge or strengthen the dominance of English in world literature?

RW: The English language is dispersed like no other: it is a first, second, or third language used in the largest number of countries. That means that there are a greater number of English-language editions (US, UK, etc) and also that English-language readers will have varying degrees of proficiency. This diversity creates an enormous range of English-language geographies, writers, and audiences. It also means that readers of English-language works are likely to have very different experiences: the work will be foreign, strange, or difficult to some; familiar to others. Writers of born-translated fiction have tried to find ways to think about the globalization of English and its political histories while accommodating, even soliciting translation into additional languages. Born-translated works thus strengthen the dominance of English insofar as they are more likely to be absorbed into additional languages. Yet they strive to challenge that dominance by pointing at the role of English in histories of globalization, by registering English’s debts to other languages, and by forcing readers to notice that English operates as a language among other languages. This last move is crucial, since, as Pascale Casanova has shown, literature in dominant languages tends to “forget” that it has benefitted from other languages. Born-translated novels engage in a project I call “unforgetting.” They draw attention to the unevenness of the literary marketplace and emphasize how much the English-language novel owes to translations.

Q: Do novelists writing in other languages, besides English, also think about translation?

RW: Yes, in fact, in the invention of born-translated fiction, Anglophone writers are the followers, not the leaders. This makes sense when we consider that Anglophone works can succeed without being translated. But writers in smaller languages, by which I mean languages for which there are fewer readers and publishers, have had to depend on translation for survival. Some writers have tried to mitigate the need for translation by choosing to write in a dominant language, if they can. I call this strategy “preemptive translation.” This is a very old strategy. Late Medieval and early modern European writers often circulated their work both in Latin and in vernacular (local) languages. In fact, for most of literary history, people who could write—very few people—would have had one language for writing and a different language for speaking.

Periodically, it has seemed important for writers to align these two languages, but this has not always been so. Contemporary global novelists who address their works to multiple audiences, such as Haruki Murakami (Japanese), Orhan Pamuk (Turkish), and Roberto Bolaño (Spanish), have built translation into the form of their works, emphasizing translation’s history and ongoing relevance while insisting that a novel can belong to more than one language.

Q: Your arguments have been debated by postcolonial critics and others. What is the nature of their objections and how do you respond?

RW: There’s some discomfort about the idea that English-language works would welcome translation, since critics and many writers have long argued that the most experimental, most challenging literature would have to impede translation. The work that is difficult to translate is celebrated for its engagement with a specific national language and for its refusal to enter, or enter easily, into the pipeline of multinational publishing. The portable work, for its part, is vilified for having surrendered to that pipeline, exchanging aesthetic innovation for commercial success.

Postcolonial critics, though they don’t necessarily privilege aesthetic innovation above all, have often embraced the idea that the best literary works—the ones that resist political and cultural homogenization—are those that are untranslatable or nearly untranslatable. In my book, I argue that the emphasis on untranslatability assumes that all literature is, or ought to be, written for a single audience, who are the intrinsic or fluent readers of the work as compared to the secondary or foreign readers, who read in translation. But literary works can belong to many different audiences, and contemporary writers have found new ways to represent local geographies and cultures to global readers. Instead of preventing or halting translation, born-translated works dramatize translation. Encountering the visual, narrative, thematic, and formal devices of translation, readers are asked to imagine other literary histories and other audiences. Born-translated novels find ways to make readers unforget those audiences. As writers in dominant languages, they stake their claim to originality not by protecting uniqueness but by sharing it, and by insisting that even the most local fictions require knowledge of other languages, literary histories, and geographies. They show us that there are no languages without foreign languages. We would do better to think of literary histories as a pattern of convergences and departures.

Approaching world literature from the perspective of translation, I argue, means confronting the idea that languages are not really countable. They are not equivalent units. A focus on translation and contact among languages implies new scales of literary history and new principles of literary belonging. My book offers some suggestions about how we should classify and read novels in the wake of born-translated fiction.