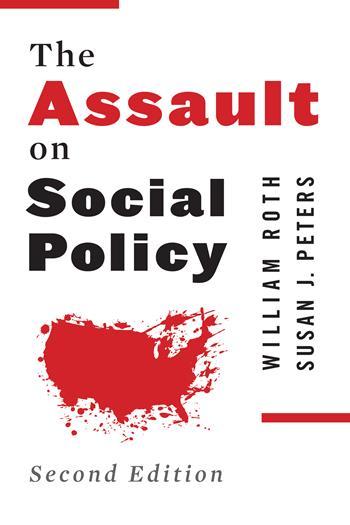 Bernie Sanders has been making waves recently with his campaign for the Democratic nomination for the 2016 Presidential Election, so we thought this would be an ideal time to post his foreword to the second edition of The Assault on Social Policy, by William Roth and Susan J. Peters. In this foreword, Sanders describes the “unprecedented assault … on the public policies needed to assure a decent society” and argues against the idea of “tax breaks to the extremely wealthy.” Read more below:

The Assault on Social Policy is even more relevant today, in its second edition, than it was ten years ago. In the first edition, William Roth investigated poverty, welfare, health, the social security system and disability in children. I was impressed then and I am impressed now by his analysis of economic politics, the role of corporations in shaping public life, the media, and the globalization of our economic policies. Roth and Susan Peters contribute to elevating the debate regarding social policy at the present critical historical hour.

Since William Roth wrote the first edition of The Assault on Social Policy, America has lived through two major wars in Iraq and Afghanistan, and suffered the most sustained systematic economic downturn since the Great Depression, one that has left millions upon millions of Americans without jobs and millions of others without decent housing.

The progressive approach that Roth and Peters argue for has been less successful than many Americans had hoped for with the election of President Obama and a strong progressive presence in the US House of Representatives. As of this writing, in the summer before the 2012 presidential election, we have witnessed an unprecedented assault, at least in my lifetime, on the public policies needed to assure a decent society and hopeful future for most Americans. With the financial assistance of some of the wealthiest people in America, a bitter right-wing reaction and full-scale assault on the rights of workers, teachers, women, and the poor has risen to the surface. Regrettably, the first edition of The Assault on Social Policy has proven all too painfully prescient. When President Obama said, a couple of weeks after his inaugural, that the Republicans had a choice between cooperating with him or staying at home and listening to Rush Limbaugh, many of them chose the latter.

Now, at a time when the United States has the most unequal distribution of wealth, there should be no talk of tax breaks to the extremely wealthy; instead we should be using the hundreds of billions saved to repair the crumbling of our infrastructure. The attempt to end, even by way of phasing out, Social Security as we know it, the most successful social policy in the modern history of America, must be exposed for what it is: A virtual contempt for the dignity of America’s older population as well as future generations. Every actuarial study has demonstrated the fact that Social Security, which did not contribute one dime to the national debt, is being falsely blamed, and in fact, is solvent for at least the next twenty-two years. Furthermore, we should invest in making a transition of our energy system away from fossil fuels towards sustainable energy sources. This will create a significant number of jobs, help to achieve energy independence, and cut down on greenhouse gas emissions.

Roth and Peters offer a positive vision for helping to achieve a progressive social democracy. We cannot afford to give in to the assault on social policy by the forces of reaction. What Roth and Peters achieve is a basic understanding that economic policy is conditioned on the morality of social democracy. In my view, Roth and Peters have written an impressive book that should be read by all members of Congress and anyone who is concerned with the well-being of our basic, democratic institutions.

William Roth and Susan Peters’ book should be analyzed and debated, which is what they are asking us to do. At a time when wealthy corporate interests have more power than they have ever had, it is altogether timely that we undertake a thorough evaluation of aspects of society in our struggle to make our nation and the world a more just and democratic place.