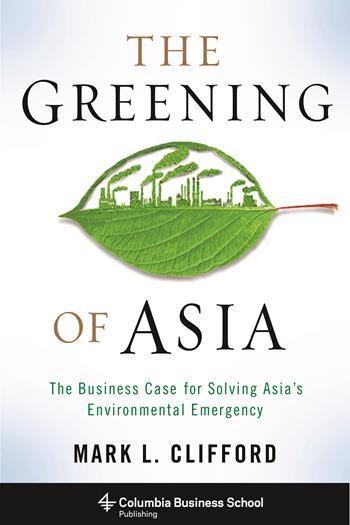 “Asia is approaching a moment of systemic—in some cases, existential—crisis. How Asian countries react to the environmental challenges of pollution, resource shortages, and climate change will determine whether the region will continue along its unmatched path of growth or descend into an increasingly unlivable dystopia.” — Mark L. Clifford

This week our featured book is The Greening of Asia: The Business Case for Solving Asia’s Environmental Emergency, by Mark L. Clifford. Throughout the week, we will be featuring content about the book and its author on our blog as well as on our Twitter feed and our Facebook page. Today, we are happy to feature part of an excerpt from the book that originally appeared on the Asian Review of Books: “Green Shoots Under Soot-Stained Skies.”

Beijing’s air is “crazy bad,” according to the U.S. Embassy: choking pollution regularly smothers the capital, reducing visibility to near zero, grounding planes, snarling traffic, and forcing city dwellers to don protective face masks while outside. A widely used air quality index, which in the United States rarely goes above 100 and exceeds 300 only during forest fires and other extreme events, approached the 1,000 level in Beijing in early 2013.

The effect, says a Chinese researcher, is to blot out the sun as effectively as a nuclear winter. Office workers in the capital’s skyscrapers cannot see the streets below, as a bitter, blinding pall settles over a city that hosted the 2008 “Green Olympics.” Beijingers call it “air-pocalypse” or “air-mageddon,” and they have become increasingly vocal about their frustration. “I especially want to know if the party secretary or the mayor are in Beijing these days,” a senior editor at People’s Daily wrote on his blog during record smog in January 2013. “If so, how do they guarantee they can breathe safely in Beijing?”

Two thousand miles to the south, in Nga Pi Chaung, Myanmar, some forty seventh graders crammed into a small classroom are learning about climate change. Their small village clings to the belly of Myanmar’s Ayeyarwady Delta and is without electricity or running water. It is also a place with no litter—its 821 inhabitants are subsistence farmers on the margins of the cash economy, too poor even to generate trash. In 2008, the delta was shredded by Cyclone Nargis, and an estimated 138,000 people were killed. And although no one knows definitively if Cyclone Nargis was caused by climate change, what’s clear is that big storms are coming more often and are more violent when they hit. For students in this village, for their parents, and for tens of millions of people in Myanmar and hundreds of millions of people throughout Asia, this pattern of more extreme weather threatens their already difficult lives. In some cases, it threatens the nations themselves. Bangladesh, Myanmar’s neighbor to the west, has a population of 160 million people, and most of them live fewer than ten feet above sea level. Even a slight rise in the sea level could put the country basically underwater. The Maldives faces a similar fate: “If things go business-as-usual, we will not live, we will die,” Maldives President Mohamed Nasheed told the United Nations in 2009. “Our country will not exist.”

Asia’s richer nations are not immune to environmental emergencies. More than a thousand miles south of the Ayeyarwady Delta, almost on the equator, is the wealthy city-state of Singapore. With average incomes higher than those in the United States, it prides itself as a city in a garden, one whose commitment to the environment sets it apart from the region. But in June 2013, the tree-filled city was blanketed by choking haze from fires in neighboring Indonesia. These fires, most of which were deliberately set as a quick way of hh land for palm plantations, forced Singaporeans indoors and spurred the formation of a high-powered Haze Inter-Ministerial Committee, chaired by the defense minister. “Singapore … is being suffocated,” lamented former Prime Minister Goh Chok Tong. Current Prime Minister Lee Hsien Loong was blunt when it came to assigning blame: the fires occurred because of “illegal burning by errant companies” in Indonesia. The burning of Indonesian forests is doubly damaging, robbing the planet both of its biodiversity and of one of its most important carbon sinks.

Asia is approaching a moment of systemic—in some cases, existential—crisis. How Asian countries react to the environmental challenges of pollution, resource shortages, and climate change will determine whether the region will continue along its unmatched path of growth or descend into an increasingly unlivable dystopia. Its response will be unlike that of the United States or Europe; Asia has more people, more governments, more diversity in terms of wealth and poverty, and a broader range of natural resource endowments. And although this diversity makes the path to solutions more complex, it has also positioned Asia as a test-bed for hundreds of experiments, both in businesses and in government policies. Governments play a critical role in setting and enforcing rules, but it is companies that bring government policies to life in the real world. Individual firms have the resources—the money, the people, and the technological know-how—to most effectively implement change. Asia already has countless companies that are, in ways large and small, making the transition to a greener, less resource-intensive, lower-carbon world. The chapters that follow [in this book] profile some of these companies and explore the essential role that business can and must play in helping ensure that Asia chooses a path to ensure long-term prosperity. But in order to understand the impact that companies can have, it’s important to take a closer look at the way business, policy, and civil society interact and how these three forces can align to create change.

Read more from the excerpt at the Asian Review of Books.