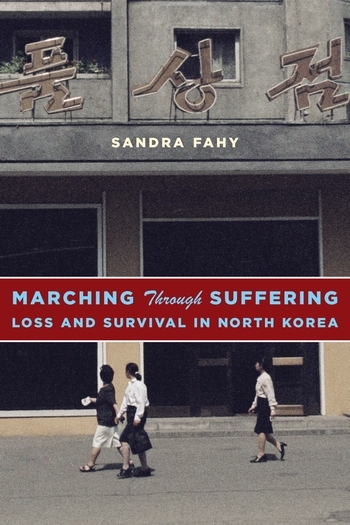 “This fact, that they use humor and wordplay, directly challenges the notion that [North Koreans] are all brainwashed victims.”—Sandra Fahy

Earlier this Fall, North Korea News interviewed Sandra Fahy about her book Marching Through Suffering: Loss and Survival in North Korea, which we just published. It’s a fascinating interview in which Fahy describes some of the challenges of studying North Korea, particularly given her background in anthropology. Obviously not able to talk to people living in North Korea, Fahy spoke with recent defectors to learn about how North Koreans make sense of their world.

Fahy points out that the famine in North Korea has not produced the kind of social upheaval some policymakers thought might happen. She argues that famine rarely does cause these kinds of monumental change, however, she was surprised by the lack of anger on the part of North Koreans:

When I was conducting the research I was surprised by something: I had expected North Koreans would have been angry, annoyed, judging of the state for failing to provide food for them (as it promised to do).

They were angry after the fact, in South Korea and China, but when I asked them to recollect their lives in North Korea they did not have anger toward the state then. They did not see the triage of resources toward the military, toward the capital, as unfair. Rather “that’s just the way it was”—this kind of banal rationalization that was unusual to me.

I believe my most important findings are these: first of all, we should not presume that those who defect are always and necessarily the worst off. Many still hold the memory of Kim Il Sung highly, while demonizing Kim Jong Il.

Fahy also was struck by how North Koreans use language and even humor to frame their very challenging existence:

Perhaps some of the most interesting things I learned in this research concern now North Koreans use language to communicate different registers of socially acceptable activity.

For instance, if they were planning on going to the black market they didn’t use amshijang (“black market”); they used the word baekwhajom—they called it the department store. They use humor and wordplay with great skill to communicate what they need, just as any of us do.

I had read about the role of humor in the Holocaust, so I wasn’t shy to ask North Koreans about common jokes during the famine years. This fact, that they use humor and wordplay, directly challenges the notion that they are all brainwashed victims.

The other thing which is significant is this: Many North Koreans I met with felt a deep ambivalence about leaving the North. Yes, it’s a corrupt state, but they are connected to family, friends, community—it is everything they have known for most of their lives, so departing is not the “achievement of liberation” that it is often depicted to be in the international community. A political, economic and social freedom is achieved, but I think many North Koreans would say it is not a freedom of the heart – the heart remains in North Korea.

Fahy was also struck by the shift in gender roles and hierarchy that the famine caused:

Women called men meongmeongi (doggy), as if they were just dogs barking into the air. They also called them “daytime light bulbs” (i.e. not useful).

The women really took a strong role in the markets during the famine. Two reasons for this: the state turned a blind eye to women’s work (which has often been regarded as something not as vital as what men do) and also women in famine-time typically pick up the slack. North Korean men lost face, or so many folks (men and women) told me, and women were better at “knowing how to talk to sell things.”

I recently had the chance to ask three 2014 North Korean arrivals, women, at Hanawon, what male-female relations were like in North Korea. They said relations were bad. That they were shocked when they got here (South Korea) to see how men behave. North Korea is still a very male-chauvinistic society.