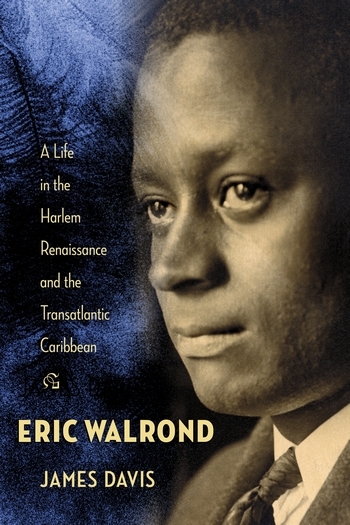 For our Thursday Fiction Corner, we asked James Davis, author of Eric Walrond: A Life in the Harlem Renaissance and the Transatlantic Caribbean, to discuss what makes the fiction and journalism of Walrond so distinctive.

All of Eric Walrond’s writing has a kind of restless quality, a turbulence that is a bit disturbing yet intensely compelling.

Besides Tropic Death, which I enjoy for these sensory appeals as much as its critique of colonial relations, I really like Walrond’s story “Miss Kenny’s Marriage” and his essay “White Man, What Now?” The first is a sly trickster tale set among Brooklyn’s early 20th century black bourgeoisie. It’s shrewd and hilarious, published originally in 1923 in The Smart Set, a New York magazine edited at the time by H.L. Mencken and George Jean Nathan. A sendup of the social pretensions of the “strivers” of the race, the story chronicles the rise and fall of a pompous Atlantic Avenue hairdresser—or as Miss Kenny puts it, “not a hairdresser at all, but a beauty culturist.” Day and night she’s in the shop, coiffing “girls and old women, spinsters and preacher’s wives, scrubwomen and colored ladies of gentility,” and saving bundles of cash. But despite her work ethic and churchgoing ways, she is arrogant and her striving for respectability involves deep prejudices. “I am not like a lot of these new niggers you see floating around here,” she tells a client, “A few hundred dollars don’t frighten me. Only we used-to-nothing cullud folks lose our heads and stick out our chests at sight of a few red pennies.” No, she adds, “there ain’t none of the nigger in me, honey.”

Walrond delivers her comeuppance in the form of Elias Ramsey, a prominent young lawyer, member of Brooklyn’s “olive-skinned aristocracy,” twenty-three years her junior. Courting Miss Kenny with professions of love and adulation, he absconds soon after their wedding with all her hard-earned savings. Although the story is just a lark, it exhibits Walrond’s flair for code switching, alternating idiomatic registers between Southern migrant characters, black New Yorkers, and his own wry narrative voice. A twenty-four year old writer only a few years removed from the Caribbean, Walrond’s performance in “Miss Kenny’s Marriage” is a kind of masquerade, a way of becoming a New Negro author by writing like an American. The story also stages a theatrical punishment for its title character because she commits the cardinal sin of harboring contempt for less respectable members of her race.

The later essay “White Man, What Now?” is, as the title suggests, very different in tone. Polemical and clever, it appeared in London’s Spectator in 1935 and was reprinted in the Jamaica Gleaner. It’s a shot across the bow of the English colonial mentality from the perspective of one of her former subjects. The irony it observes is that all the effort West Indians have expended to become good Anglophiles and loyal subjects, just as the empire instructed, avails them little when they are met in England with a “colour bar.” Racial discrimination had become a subject of considerable debate by 1935, as the League of Coloured Peoples – an organization led by Jamaican emigrés Harold Moody and Una Marson – issued scathing reports about the prevalence of a “colour bar” in Cardiff, Liverpool, and London. “We were made to believe that in none of the other colonies were the blacks treated as nicely as we were,” Walrond writes, and as a result, “It was to us a source of pride and conceit to be attached to England.” The attachment appears ridiculous, however, if those who make England their home are not treated as though they are “on the equivalent of native soil.” In a delightful flourish, Walrond notes, “So thorough has been our British upbringing that if, in the event we did find a colour bar, we would consider it bad form openly to admit its existence.” I admire this essay’s cagey rhetoric, its way of lodging an unmistakable accusation of hypocrisy without sounding accusatory. What a wonderfully English way of puncturing the sham Englishness of the colonial project! And how fitting that the essay appeared in the Spectator, a magazine established by the arch satirists of the eighteenth century.