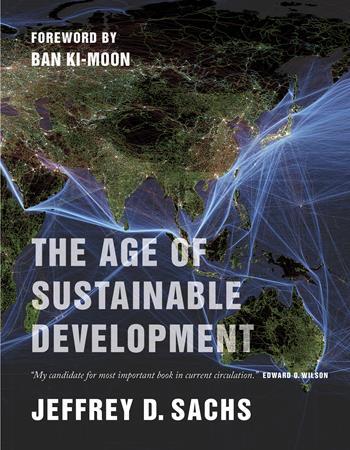 “Achieving sustainable development on our crowded, unequal, and degraded planet is the most important challenge facing our generation.”—Jeffrey Sachs

In the following excerpt from the introduction to The Age of Sustainable Development, Jeffrey Sachs outlines some of the core concepts of sustainable development and the role of governments and multinational corporations:

Thus we arrive at sustainable development. As an intellectual pursuit, sus­tainable development tries to make sense of the interactions of three complex systems: the world economy, the global society, and the Earth’s physical environ­ment. How does an economy of 7.2 billion people and $90 trillion gross world output change over time? What causes economic growth? Why does poverty per­sist? What happens when billions of people are suddenly interconnected through markets, technology, finance, and social networks? How does a global society of such inequality of income, wealth, and power function? Can the poor escape their fate? Can human trust and sympathy surmount the divisions of class and power? And what happens when the world economy is on a collision course with the physical environment? Is there a way to change course, a way to combine eco­nomic development with environmental sustainability?

Sustainable development is also a normative outlook on the world, meaning that it recommends a set of goals to which the world should aspire. The world’s nations will adopt Sustainable Development Goals (SDGs) precisely to help guide the future course of economic and social development on the planet. In this normative (or ethical) sense, sustainable development calls for a world in which economic progress is widespread; extreme poverty is eliminated; social trust is encouraged through policies that strengthen the community; and the environment is protected from human-induced degrada­tion. Notice that sustainable development recommends a holistic framework, in which society aims for economic, social, and environmental goals. Sometimes the following shorthand is used: SDGs call for socially inclusive and environmentally sustainable economic growth.

To achieve the economic, social, and environmental objectives of the SDGs, a fourth objective must also be achieved: good governance. Governments must carry out many core functions to enable societies to prosper. Among these core functions of government are the provision of social services such as health care and education; the provision of infrastructure such as roads, ports, and power; the protection of individuals from crime and violence; the promotion of basic sci­ence and new technologies; and the implementation of regulations to protect the environment. Of course, this list is just a brief subset of what people around the world hope for from their governments. In fact, all too often they get the reverse: corruption, war, and an absence of public services.

In our world today, good governance cannot refer only to governments. The world’s multinational companies are often the most powerful actors. Our wellbeing depends on these powerful companies obeying the law, respecting the natural environment, and helping the communities in which they operate, espe­cially to help eradicate extreme poverty. Yet as with governments, reality is often the reverse. Multinational companies are often the agents of public corruption, bribing officials to bend regulations or tax policies in their favor and engaging in tax evasion, money laundering, and reckless environmental damage.