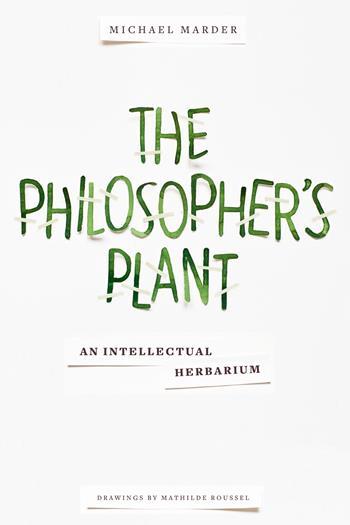 This week our featured book is The Philosopher’s Plant: An Intellectual Herbarium, by Michael Marder, with drawings by Mathilde Roussel. Today, we are happy to present an article by Michael Marder and Luce Irigaray, in which they discuss the need for an “environmental pedagogy” and explain some of the lessons that plant life can teach us. The post can also be found on Michael Marder’s Los Angeles Review of Books Channel

Don’t forget to enter our book giveaway for a chance to win a free copy of The Philosopher’s Plant!

One crucial measure of human maturity is the way we treat our environment. A careless and destructive approach toward the world, which is usually conceived as a kind of playground for the enactment of our phantasies, is irresponsible and childish. It shows no respect for other forms of life, a lack of concern with the future, and the inability to think and to grow beyond the demands of sheer physical survival.

Historically, there has been little change in the direction of a more adult behavior toward the environment. Among other living beings, plants have been particularly mistreated as a result of this attitude because they have been thought of as infinitely malleable matter, on which human form could be stamped or imposed, generally to the detriment of their own biological life. Indeed, Aristotle, who was the first to come up with the notion matter in the West, derived it from the common Greek word for “wood.” Like plants, matter was supposed to be a passive receptacle for the form that was, in many cases, alien to vegetal life. Although Aristotle was still attentive to living forms, after him, a tree converted into a table or a bed became the preferred example of formed matter, while the self-formation of the tree itself, amenable to patient cultivation and care, was dismissed.

When it comes to respect for the environment we are still children, or even infants. More than that, we are terrible, unruly children because, for the most part, we are not open to being educated on the subject. Only punishments, in the shape of natural disasters attributable to global warming, have had some effect on human behavior, awakening in us a consciousness of the negative consequences that accompany immature environmental conduct. Still, a genuine change of attitudes is unlikely as a result of threats and punishments alone. What is sorely needed is an environmental pedagogy—not one formulated by our fellow humans, but one imparted by parts of the world we inhabit.

Literally, pedagogy means “the guidance or leadership of children.” If we are all children in relation to the environment (both as dependent creatures who are much younger than it and as the immature agents of its destruction), then we ought to be led or guided by the more developed wisdom of the natural world. And, since plants are some of the oldest forms of life on earth, indispensible to the survival of all other living beings, their guidance is especially conducive to an environmental pedagogy.

In a way, we should follow the plants. There is plenty of resistance to such an injunction, which may sound absurd. More often than not, we pay no attention to the meanings of the vegetal world. We do not listen to what it says to us. And yet, its teaching can be useful to our own life and our manner of behaving toward the others and toward the world in general.

The first lesson is that life cannot be without faithfulness to oneself, endurance, and patience. No doubt, it depends on our human and non-human environment whether we remain alive and even whether we can develop. Nevertheless, we must structure what we receive into a whole, and not become fragmented according to the objects of our needs or desires. Now, such fragmentation is more and more the case for a human, contrary to the example that the vegetal world gives us. Unfortunately, our way of acting does not correspond to the cultivation of life that we must take charge of. And this probably explains why we stop growing so quickly, whereas a tree continues growing until its death.

The second thing that the vegetal world teaches us is, precisely, that we cannot exist without becoming. However, we generally consider, at least in the West, that we receive life once and for all at birth, and we only have to maintain it without caring about its development. Then, we remain torn between a mother, who gives natural life to us, and a father, who would introduce us into a cultural or spiritual life. Such a split has been paralyzing our human growth for centuries. If we want to make a future for ourselves and for the world possible, we must urgently understand that our cultural or spiritual life has to correspond to the blossoming and flowering of our natural belonging, and define a culture which can allow for a continuity between these presumably separate lives. All the more so, since this artificial partition has damaged our relations to and with all living beings.

The vegetal world provides us with many other teachings: for example, it reveals the value of silence for the cultivation of our own life and living relations with different other(s); it proves that it is possible to teach through showing, on the hither side or beyond any discourse; it displays the beauty and fecundity of natural forms before or outside human fabrication; it indicates the necessity of obeying natural rhythms for becoming, and so forth.

More surprisingly, the vegetal world gives us advice about an appropriate manner of behaving. It says to us that it is not suitable to take advantage of the environment in which we live without making our contribution to it. But, if, for its part, it cares about breathable air, we, as humans, behave like consumers, who pollute without being concerned with our contribution to the atmosphere and our living surroundings, be they vegetal, animal, or human.

These are nothing but the beginnings of vegetal environmental pedagogy that presupposes a new openness to the teachings of plants. Rather than listen to plants in order to interpret the “information” they might convey to us, we would do well if we refrained from imposing our communicative model on them and, instead, heeded their ethical, aesthetic, and other kinds of lessons. Our fate and that of the non-human world depend on this.