“[W]hat is perhaps most remarkable about Dr. Keene is that Japan, a racially homogeneous nation that can be politely standoffish to non-Japanese, has embraced him with such warmth.”

Donald Keene began teaching Japanese literature at Columbia University in 1955. Over the course of the second half of the twentieth century and the first decade of the twenty-first, he has written and translated over thirty books (many with Columbia University Press), has been awarded the Japanese Order of Culture (the first Westerner to be given this prestigious honor), and was an instrumental figure in bringing the classics of Asian literature to the attention of Western academia. Already a beloved figure in Japan, Keene earned “status approaching that of folk hero,” according to Martin Fackler in a profile in the Saturday New York Times, when he applied for and gained Japanese citizenship in the wake of the Fukushima nuclear accident after last year’s earthquake and tsunami.

Fackler and Keene agree that the most important factor in Keene’s popularity in Japan is his genuine affection for that nation:

Dr. Keene has spent a lifetime shuttling between Japan and the United States. Taking Japanese citizenship seems a gesture that has finally bestowed upon him the one thing that eludes many Westerners who make their home and even lifelong friendships here: acceptance.

“When I first did it, I thought I’d get a flood of angry letters that ‘you are not of the Yamato race!’ but instead, they welcomed me,” said Dr. Keene, using an old name for Japan. “I think the Japanese can detect, without too much trouble, my love of Japan.”

That affection seemed especially welcome to a nation that even before last year’s triple disaster had seemed to lose confidence as it fell into a long social and economic malaise….

BUT what is perhaps most remarkable about Dr. Keene is that Japan, a racially homogeneous nation that can be politely standoffish to non-Japanese, has embraced him with such warmth. When he legally became a Japanese citizen this year, major newspapers ran photographs of him holding up a handwritten poster of his name, Kinu Donarudo, in Chinese characters. To commemorate the event, a candy company in rural Niigata announced plans to build a museum that will include an exact replica of Dr. Keene’s personal library and study from his home in New York.

He says he has been inundated by invitations to give public lectures, which are so popular that drawings are often held to see who can attend.

“I have not met a Japanese since then who has not thanked me. Except the Ministry of Justice,” he added with his typically understated humor, referring to the government office in charge of immigration. 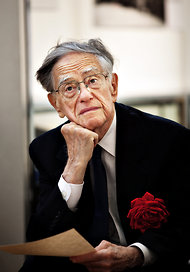 The story of Keene’s love of Japan dates back to his college days in 1940, before his time in the United States Navy in World War II:

His affection for Japan began in 1940 with a chance encounter at a bookstore near Times Square, where Dr. Keene, then an 18-year-old university student at Columbia, found a translation of the Tale of Genji, a 1,000-year-old novel from Japan. In the stories of court romances and intrigue, he found a refuge from the horrors of the world war then already unfolding in Europe and Asia.

Dr. Keene later described it as his first encounter with Japan’s delicate sense of beauty, and its acceptance that life is fleeting and sad — a sentiment that would captivate him for the rest of his life.

When the United States entered the war, he enlisted in the Navy, where he received Japanese-language training to become an interpreter and intelligence officer. He said he managed to build a rapport with the Japanese he interrogated, including one he said wrote him a letter after the war in which he referred to himself as Dr. Keene’s first P.O.W.

Professor Keene was one of the few Western scholars who was able to enter the world of Japanese literature:

In Japan, he said his career benefited from good timing as the nation entered a golden age of fiction writing after the war. He befriended some of Japan’s best known modern fiction writers, including Yukio Mishima and Kenzaburo Oe. Even Junichiro Tanizaki, an elderly novelist known for his cranky dislike of visitors, was fond of Dr. Keene, inviting him to his home. Dr. Keene says that was because he took Japanese culture seriously.

“I was a freak who spoke Japanese and could talk about literature,” he joked.

Japanese writers say that Dr. Keene’s appeal was more than that. They said he appeared at a time when Japan was starting to rediscover the value of its traditions after devastating defeat. Dr. Keene taught them that Japanese literature had a universal appeal, they said.

“He gave us Japanese confidence in the significance of our literature,” said Takashi Tsujii, a novelist.

After his recent retirement, Professor Keene has decided to move to his adopted country:

Now, at the end of his career, Dr. Keene is again helping Japanese regain their confidence, this time by becoming one of them. Dr. Keene, who retired only last year from Columbia, says he plans to spend his final years in Japan as a gesture of gratitude toward the nation that finally made him one of its own.

“You cannot stop being an American after 89 years,” Dr. Keene said, referring to the age at which he got Japanese citizenship. “But I have become a Japanese in many ways. Not pretentiously, but naturally.”