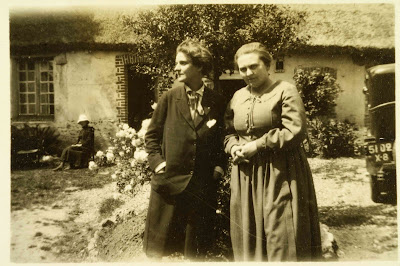 The always interesting and entertaining blog, Fernham has dedicated the week to Sylvia Beach. In conjunction with its celebration of legendary bookstore owner and publisher, Fernham will be featuring The Letters of Sylvia Beach, edited by Keri Walsh.

Yesterday, Walsh contributed a post describing the Adrienne Monnier, Sylvia Beach’s partner in business and life. Here are some excerpts from Walsh’s post and you can read the entire post here.

Sylvia Beach said that she had three loves: Shakespeare and Company, James Joyce, and Adrienne Monnier. Of this trilogy, it’s Adrienne Monnier we tend to hear least about, but Monnier was the most influential person in Beach’s life. Though she was half a decade younger than Beach, Monnier taught her how to run a bookstore, how to deal with French bureaucracy, how to manage cantankerous people: Beach never made an important decision without first consulting her, relying heavily on Monnier’s good judgment and canny grasp of human psychology….

Adrienne Monnier wrote personal essays on a range of subjects from Beowulf to André Breton. When reading her work I’m always struck by how well she knew herself, what confidence she had in her taste, the subtlety, wit, and depth of her remarks. Though she was a reader of the most difficult and esoteric works, she was also free from snobbery, ranking Josephine Baker or a virtuoso trapeze artist alongside Shakespeare. There’s a playfulness and shape to the argumentation of her essays that recalls Virginia Woolf’s A Room of One’s Own: Monnier charts the movement of her thought, considering and reconsidering points, airing objections and then meeting them. She also has a sly wit, a sort of parody of the dry reviewer, when she talks about her “duty” to see the nude women in all of Paris’s different cabarets. Her sensibility is eminently unpuritanical, always seeking aesthetic pleasure, revealing herself as a connoisseur, but never shying away from ethical or political concerns.