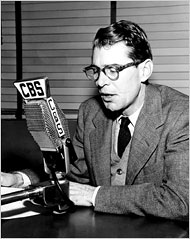 Over the weekend, the New York Times ran an article about Don Hollenbeck and Loren Ghiglione’s new biography, CBS’s Don Hollenbeck: An Honest Reporter in the Age of McCarthyism.

The book and the article come on the heels of the fiftieth anniversary of Edward Murrow’s famous speech to the Radio-Television News Directors Association in which he called upon the news media to be more critical of itself. Don Hollenbeck, working for Murrow’s CBS news division before his suicide, was one of the only news critics at the time. His program, “CBS Views the Press,” which ran for four years offered trenchant critiques of media bias often earning him the enmity of advertisers and fellow journalists, particularly those on the right.

In the NYT article, Loren Ghiglione claims that Murrow “knew that Hollenbeck would say what had to be said about those newspapers, and his own fate be damned.”