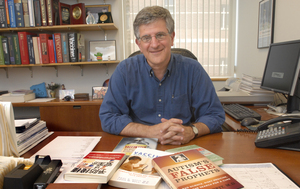 Earlier this week, The Philadelphia Inquirer ran a very interesting profile of Dr. Paul Offit, author of Autism’s False Prophets: Bad Science, Risky Medicine, and the Search for a Cure. The article describes Offit’s work as well as the ways in which he has found himself at the center of the controversy regarding the link between autism and vaccines. Offit’s belief in the safety of vaccines reflects the opinion of the scientific community and most physicians. However, by becoming the issue’s most public face, he has had to confront threats and the animosity of those who believe he is wrong.

Indeed a simple Google search of Offit’s name or the book’s title will reveal the very different and often unfair assessments of his position. However, if you want to join in on a more enlightened and balanced discussion of the book, may we suggest heading over to Scienceblogs, whose book club will be discussing the book from October 1-October 10. Scienceblogs, created by Seed magazine, brings together more than 60 of the best and most interesting science blogs and is definitely worth reading.

For more on Autism’s False Prophets, you can also view a video of Paul Offit discussing the book, read an excerpt, or read a recent review from the New York Post.