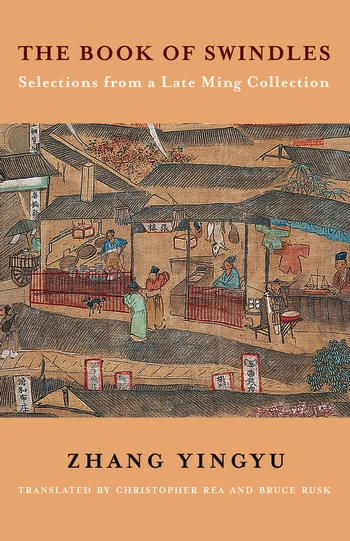 If your first association with Ming China is delicate blue-and-white vases or the dreamy landscape paintings of Shen Zhou and others, The Book of Swindles will give you a very different idea of the period. This book reveals the seedy, funny, cruel and absurd aspects of a culture dominated by a complex government bureaucracy, on the one hand, and rampant commerce, on the other. While in its thoroughness it stands on par with, say, canonical Chinese writings on warfare, The Book of Swindles is a classic of a different kind. This is a treatise on one of the less dignified aspects of human nature: the art of deception.

The experience of reading Zhang Yingyu is comparable to that of Boccaccio’s Decameron. While the buildings and frescoes of fourteenth-century Florence are a testament to the Renaissance city’s loftiest aspirations, Boccaccio’s tales show a world of widespread corruption, illicit sexual exploits, strong passions, and shameless scams. Perhaps human nature has not changed all that much since then. Writers like Zhang Yingyu and Boccaccio show us the darker, funnier, and more human side of even the most glorious historical periods.

In the case of Ming China, scams and deception are also reflected in some of the visual art of the period. The handscroll painting on the cover of The Book of Swindles shows a busy market in which a visitor is being given false assurances by an insistent salesman. The new edition’s translators, Christopher Rea and Bruce Rusk, explain:

“The cover illustration shows detail from ‘Bustling Nanjing’ 南都繁繪圖卷, a long handscroll painting by an anonymous Ming dynasty artist (formerly attributed to Qiu Ying 仇英, 1494?–1552) currently held in the National Museum of China. This scene of a marketplace in the capital features in the foreground a row of shops, including the Yonghe Fabric Emporium; a money changer, identifiable even to the illiterate by the silver ingot and bronze coin depicted on the top of its two signs; and what appears to be a candle vendor. An itinerant musician—a quintessential figure of the Rivers and Lakes—walks by on the left, carrying a lute on his back. Across the street, we see a vendor of ceramic dishware on the left and, on the right, a man selling tea or warmed wine. Drawing our attention at the center is a man gesturing toward a restaurant called ‘Zhang’s Place’. Yet the animals flanking the passerby suggest he should be wary of accepting the tout’s invitation: this establishment is probably one that ‘hangs a lamb’s head out front while selling dog meat in the back’, as a common expression for bait-and-switch would have it. This roadside scene thus depicts a cultural tableau of commercial institutions, itinerant characters, and deceptive practices similar to what we find in Zhang Yingyu’s work.”

The Book of Swindles includes some forty-odd tales of deception, from the daft to the elaborate, with each one ending poorly for either the potential victim or the scammer. Stay tuned for an excerpt from the book, which will be published on the blog tomorrow.