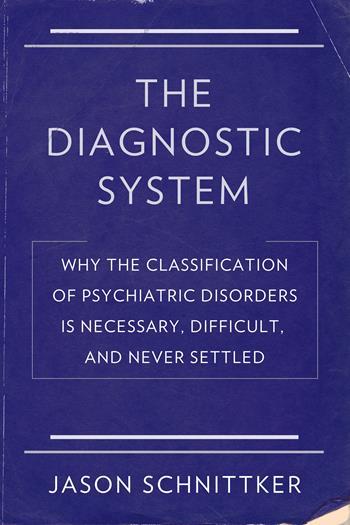 “On the one hand, many people would point out what a success the DSM has been, how it had consolidated an otherwise unmanageable scholarly field. Even when offering some qualifications about certain diagnostic criteria, these folks were clearly supportive. On the other hand, it was not uncommon for me to encounter people who vigorously criticized the DSM, root and branch, finding very little validity in its definitions or even much of value to the manual as a whole. To them, we might do just as well to get rid of it altogether and replace the DSM with something else.

It seemed to me they both had a point. ” — Jason Schnittker

This week, our featured book is The Diagnostic System: Why the Classification of Psychiatric Disorders Is Necessary, Difficult, and Never Settled, by Jason Schnittker. Today, we are happy to present part two of an excerpt from the book’s introduction. You can read part one here.

Don’t forget to enter our book giveaway for a chance to win a free copy of The Diagnostic System!

I wrote this book as a way to understand something I regularly encounter at academic meetings. I study psychiatric disorders, including what causes them, what consequences they have, and what people believe about them. The DSM has long played an important role in my life as a scholar, just as it has for virtually everybody else in the field. I provides us with a sort of lingua franca. I attend meetings with sociologists, like myself, but I also attend meetings with psychiatrics, physicians, and historians. We all study the same thing and have similar interests, but it was not uncommon for me to encounter two very different kinds of voices when it came to the DSM. On the one hand, many people would point out what a success the DSM has been, how it had consolidated an otherwise unmanageable scholarly field. Even when offering some qualifications about certain diagnostic criteria, these folks were clearly supportive. On the other hand, it was not uncommon for me to encounter people who vigorously criticized the DSM, root and branch, finding very little validity in its definitions or even much of value to the manual as a whole. To them, we might do just as well to get rid of it altogether and replace the DSM with something else.

It seemed to me they both had a point.

So I wanted to write a book that took a step back and asked why the classification of psychiatric disorders was always so fraught, and to offer arguments for why and how it might be controversial when we get around to writing DSM 6, 7, or 8.

The latest edition of the DSM is DSM-5. As with the editions before it, there has been a lot of controversy surrounding the latest edition. What I think is especially remarkable about DSM-5, though, is how much more information its authors had in front of them when they wrote it. We know a lot more about psychiatric disorders today than we did in the 1970s, around the time DSM-III was being written. We know more about what causes psychiatric disorders, what psychiatric disorders look like at a neurological level, and some of the genes that put people at risk of developing a disorder. We also know a lot more about basic demographic patterns, including age and sex differences. DSM-5 was written by real experts. With all this as background, it was possible DSM-5 could have been a revolutionary change. But it really wasn’t. And, at least to me, it’s unclear how we can parlay our immense scientific knowledge about psychiatric disorders into better diagnostic criteria.

In this book I argue that our classification systems proceed from aims rather than data. To be sure, we can write “better” diagnostic criteria, but only once we make a decision about what we want psychiatric disorders to be. If we think real disorders ought to involve genetic causes, we can write criteria based on what we now know about those causes. But those criteria will look very different from what we currently have in place, and quite a few disorders will, in effect, cease to exist. If we want to focus only on those disorders that cause significant suffering, we can do that, too. But those criteria will hinge on some notion about what “significant” is, and I doubt we can speak on one voice on the matter or judge it in the same way. Much of our discussion of the science surrounding psychiatric disorders, as robust as it is, has prevented us from really addressing those aims and thinking about the basic concepts we want to employ when crafting diagnostic criteria.

The other aspect of this book is to address one of the enduring selling points of the DSM. Those who see the DSM as a success often point to its usefulness. Whatever else we can say about the DSM, it has played a pivotal role in how professionals make diagnoses, what scientists study, what the public thinks, and what insurers will pay for. In this book I point, in a detailed way, to all the ways the DSM has changed our discussion of psychiatric disorders. I try to show exactly how useful the DSM has been. But I also argue that any appeal to the usefulness of the DSM must also address another question: If it’s useful, to whom is it useful and in what ways? Answering that question leads, I think, to another aspect of the ongoing controversy surrounding the DSM. One reason there is so much controversy surrounding the manual is that efforts to make it more useful for one group often come at the expense of its usefulness for another. We can write diagnostic criteria that are especially useful for scientists, for instance, but those criteria might have less utility for clinicians. Those criteria might also fail to cohere with what the public wants when it comes to matters of diagnosis and mental health. It’s critical that we look at what different groups want from the DSM.

My hope is that readers of this book will, among other things, come away with a better way to understand how hard it is to classify psychiatric disorders. That way, ten or twenty years from now, when we’re arguing what a real anxiety disorder is or wondering why ADHD—or whatever disorder it happens to be—is so common and speculating that maybe it’s because we’ve set the diagnostic bar too low, readers will be equipped to appreciate these arguments in a broader historical and sociological framework.