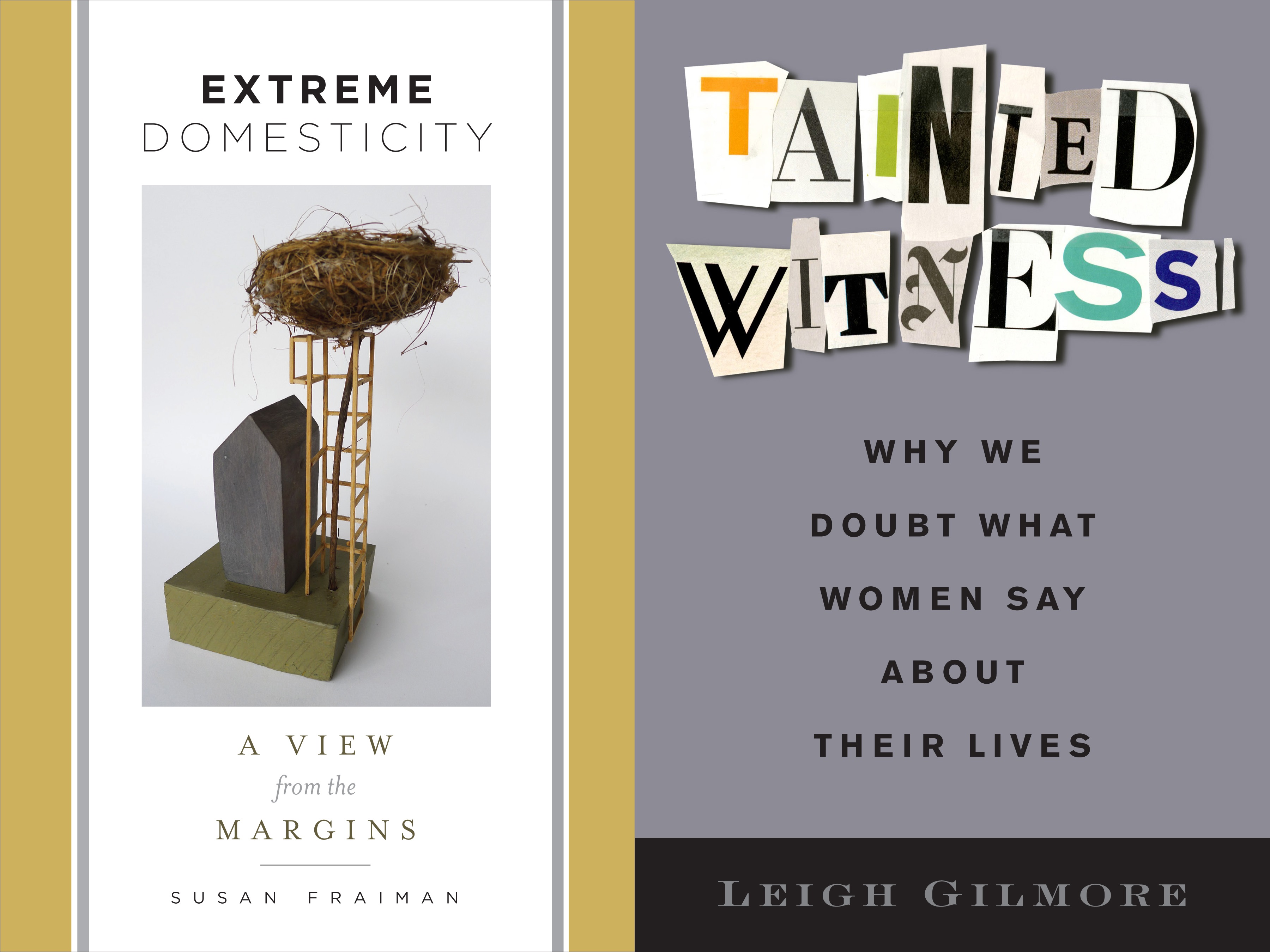 “Now that America has elected as its president a man who denigrates women and their bodies, who thinks women who exercise their reproductive rights should be “punished” and who spouts xenophobic and racist views, Gilmore’s insights are more pressing than ever. Tainted Witness is an important and timely book. If ever we needed evidence that the work of feminism is not yet done, this is it.” — Laura Frost

This week, we are featuring two exciting new books from our Gender and Culture Series: Extreme Domesticity: A View from the Margins, by Susan Fraiman, and Tainted Witness: Why We Doubt What Women Say About Their Lives, by Leigh Gilmore. Today, we have collected links and short excerpts from some of the great media attention Tainted Witness has received.

Don’t forget to enter our book giveaway for a chance to win a copy of both books!

In The Washington Post, Jill Filipovic believes that Tainted Witness “is a timely and necessary defense of the women whose voices are so often drowned out or shouted down”:

“Tainted Witness” arrives at the right time, at the front end of a rapidly building anti-feminist backlash. The ease with which so many Americans disregard or disbelieve women’s testimony was on clear display in November, when millions voted for Trump despite the accusations against him and his own claim, caught on video, that he had sexually assaulted women. This book provides a crucial feminist critique of the impossible and ever-shifting standards to which women who offer life testimony are held, along with guidance on how to navigate a path forward….

These are crucial observations and excellent rebuttals to the faux legalism that so often dominates the public discourse around high-profile sexual assault cases. We are entering an era when malevolent sexism and entrenched mistrust in women are not only tacitly approved but actively modeled by the man in the Oval Office, and when many of our most valued institutions and even the very concept of truth are under fire. Not in recent memory have the ideas Gilmore elucidates been so necessary, which is why I wish her work was more accessible to a wider audience. Still, this is a sharp work of feminist scholarship, unflinching in its insistence that women’s testimony about our own lives is a potent and often threatening force undercut by those who accurately assess its power. In a country soon to be led by a very loud man who ran a campaign of aggrieved masculinity, “Tainted Witness” is a timely and necessary defense of the women whose voices are so often drowned out or shouted down.

In the Times Higher Education, Laura Frost gave an excellent close look at Tainted Witness, which was named the THE Book of the Week:

The tautological observation that women are thought to be untrustworthy because they are women invites speculation about its genesis. While a definitive answer lies outside the scope of Tainted Witness, Gilmore is especially astute when she shows how “bodies and story move in a choreography of testimony”. For example: “The instant Anita Hill saw a barrage of flashbulbs erupt the first time she altered position in her seat, she knew that in photographs of her testimony, her body could be made to tell a story that would compromise her.” These and other somatic moments in Tainted Witness show how profoundly female embodiment influences the reception of women’s words. If harassment and assault are a means of denigrating women’s power, might the charge of fabrication – in the sense of deceit – conceal an anxiety about fabrication in the sense of making or creating, and perhaps the most fundamental power of reproduction?

Now that America has elected as its president a man who denigrates women and their bodies, who thinks women who exercise their reproductive rights should be “punished” and who spouts xenophobic and racist views, Gilmore’s insights are more pressing than ever. Tainted Witness is an important and timely book. If ever we needed evidence that the work of feminism is not yet done, this is it.

In the Boston Globe, Katie Tuttle quotes Gilmore on the timeliness of Tainted Witness:

“My hope in the book,” she said, “is if we can become familiar with these patterns for undermining women’s testimony, and undermining women’s credibility, then I think we can begin to anticipate where and how these attacks will take place and maybe we can try to stay a step ahead of them.”

As we face the results of an election that included examples of this dynamic (Hillary Clinton, Gilmore said, “has been a tainted witness for almost her entire career”), we stand at a moment of possible change. “On one hand, this seems like the era of welcome for women’s testimony. We seem to be hearing more stories from more places around the world from women,” she said. “But at the same time, the mechanisms for tainting women’s witness are swifter and more effective than ever.”

Finally, we look back to two articles written by Leigh Gilmore at The Conversation reflecting on two of the most apparent cases of disbelief of a woman’s testimony. First, she asked, in the aftermath of the 2016 presidential election, why ‘“Crooked Hillary” [was] a more compelling figure than “Fundamentally Honest Hillary”?’

I’d argue that the media’s portrayal of Clinton has less to do with her actions than with the persistent tainting of female witnesses based on gender bias. In short, my research shows that women are doubted. Women are seen as threatening stability when they show ambition and seek power. Their success threatens the association of masculine power with order.

From Eve to Clytemnestra to Lady Macbeth, powerful female figures stir up deep-seated and irrational fears of women’s proximity to power. They prompt anxieties about masculinity. These fears can be exploited and directed against particular women, as far-right Steven Bannon’s campaign against Clinton demonstrates.

These narratives and others like them align the act of doubting women with rationality and objectivity, making them feel legitimate. In other words, it is not only traditionalists who feel that women can’t be trusted with power; cultural narratives of blame make it feel right in general to doubt women.

This old story prevents other narratives from emerging. When the media recycled anecdotes that discredited Clinton instead of reframing their coverage to address the emergent themes of her historic run, they ensured that Clinton’s untrustworthiness would remain the story.

And finally, she explained what the Brock Turner sexual assault case, both Turner’s actions and, particularly, his defense team’s approach to the court case, show us about biases that work against women in state courts and in the court of public opinion:

Phrases like “he said/she said” or “no one knows what really happened” are used commonly to describe rape as a matter of interpretation. Such phrases actively harm women’s credibility in general and erode our capacity to engage with the truth of specific cases. They allow savvy defense teams to substitute bias against women for the facts of actual cases and to turn sympathy towards perpetrators.

Because these stereotypes have entered the law and permeate everyday life, doubt has become a legal weapon that can be used against any woman who testifies about rape. And in criminal cases, like rape, reasonable doubt is the standard the evidence must meet.

Yet even when the facts in a case confirm guilt, as they did in the case against Brock Turner, who was caught in the act of sexually assaulting an unconscious woman behind a dumpster, defense teams can rely on bias: that women send “mixed signals” about sex, that women say no and mean yes, that women regret sex and cry rape.

Why, then, are the stereotypes that women “cry rape” so durable? When the crime is rape, why are women doubted?