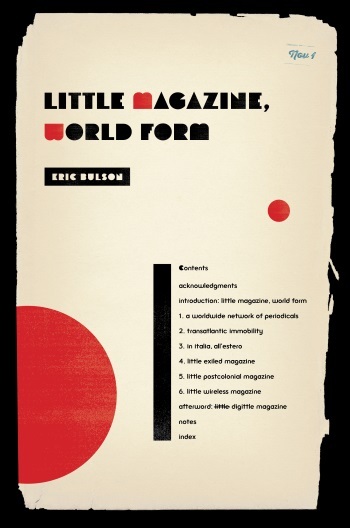 “I would love to believe that writers, critics, editors, and translators have been and will continue to be everywhere connected, but that is not and never has never been the case. The cold reality of literary history teaches us otherwise, and the little magazine is a great place to examine how this whole concept of a world republic of letters did and did not work globally in the twentieth century.”-Eric Bulson

Below is the first part of a two-part conversation between Eric Bulson, author of Little Magazine, World Form and Donal Harris author of On Company Time: American Modernism in the Big Magazines.

In this first part, Harris asks Bulson about his book and how it challenges the ways we have thought about the form and content of modernist magazines, their role twentieth-century global literature, and the promises and limitations of little magazines in creating a “world republic of little magazines” (In tomorrow’s post, Bulson will ask Harris about the “big” magazines):

Donal Harris: The term “little magazine” refers primarily to the non-commercial journals printed in the United States, England, and Western and Central Europe between the two World Wars. But little magazine, world form takes a different approach, both in terms of geography and time frame. What new constellations of magazines and literary scenes did you find when you thought about the legacy of this medium more broadly?

Eric Bulson: Like so many other people who have studied modernism over the years, I was under the impression that little magazines were really a western phenomenon. That, of course, is not true at all, and so the more I looked for examples from outside the usual Paris-New York-London orbit, the more I began to uncover constellations that I never knew existed.

One of the more surprising examples for me early on was Black Orpheus, a little magazine that came out of Nigeria in the 1950s, and had a major influence on the direction of what we now call Anglophone literature. And Black Orpheus was a major wake-up call for me. Once I knew that these other little magazine hubs existed, the more I began to realize that the whole timeline and geography for the little magazine was severely restricted and misleading. In fact, the old narrative that it was born with the French Symbolists in the 1890s and died at the end of the 1940s with the beginning of World War Two just doesn’t work globally. Once you modify the geographical frame, in fact, then you must change the timeline. The little magazine is born at different times in different places, and trying to get our heads around this whole idea requires that we develop new strategies for thinking about what the little magazine is and where it has been.

Donal Harris: You spend quite a bit of space discussing the idea of “form” as an overlooked aspect of scholarship on little magazines and periodicals in general. How do you see the “form” of little magazines changing (or remaining constant) during the twentieth century? And does periodical form have an impact on the content that gets included in the magazine?

Eric Bulson: Form is absolutely critical to our understanding of the historical, social, political, economic, and, of course, literary meaning of little magazines. It’s interesting, in fact, that the emphasis on form was something that book historians and art historians figured out decades ago but literary critics were slow to pick up on. Yes, the cool covers and edgy design have garnered lots of attention but not in any rigorous, analytical way. They are more of a side-show, or an after-thought, for those who are interested in getting to the “real content” of little magazines. Taking our cue from a tradition of those non-literary critics that think of the little magazine as an art object and as a medium can help us to reframe how we understand the relationship between the form and content, what’s in the little magazine and what the little magazine is made of.

One very important example for me was VVV, a Surrealist magazine printed in the United States during World War Two. It’s a magazine, yes, but it’s also a traveling art exhibit for the surrealists who chose voluntary exile after the Nazis arrived in France. There are visually stunning installations in these pages from Max Ernst and Marcel Duchamp and so many others, so that reading through VVV actually feels like walking through a gallery. But as interesting as that experience might be, the payoff comes in thinking about the politics of this form, the very idea that the shape, design, structure becomes a way for these exiled surrealists to find a place for art in an increasingly repressive, violent world. So form is not just about the structure, design, and sequence: it is also about the materiality of the experience, what paper gets used for the contents and cover design, what ink and typeface are available, who does the printing and with what machines and which compositors.

Eric Bulson: Like many others, I would love to believe that writers, critics, editors, and translators have been and will continue to be everywhere connected, but that is not and never has never been the case. The cold reality of literary history teaches us otherwise, and the little magazine is a great place to examine how this whole concept of a world republic of letters did and did not work globally in the twentieth century. But let me make an obvious point here. Letters are not little magazines. And this difference in the medium is important because the letter was the primary vehicle for communication at a specific moment in history, one that allowed a relatively small community of white European men to circulate their ideas in two dominant languages (French and German). Periodicals, of course, were also prevalent in this post-Enlightenment period, and they enabled the wide diffusion of Enlightenment ideals across Europe, but they should not be confused with little magazines, in part, because little magazines, to make one generalization here, tend to get made for those who do not have access to institutional foundations to support learning and research. If a definition of the little magazines is, in fact, even possible, it is by nature intended for a small community of writers, critics, artists looking to get their work in circulation when other commercial and institutionally sanctioned channels are unavailable.

The term “small community” is tricky because it’s entirely relative. Small in terms of what? A city, a nation, a continent, a globe? When you think about the little magazine on a global scale, and not just something that moved through metropolitan capitals or nations, then the question about who belongs to this republic changes dramatically. And here, I would want to make one more substitution, using “network” instead of “republic” to describe the kind of global literary communities that took shape in the 20th century through the medium of the little magazine. Unlike the “republic,” which implies belonging and unity with a center to hold the many parts together, the network is fragmented, there is no center to regulate who and what gets in and out, and the sheer multiplicity of languages can keep some hubs in the network isolated. A Japanese avant-garde collective MAVO from the early 1920s is one interesting example. It wanted to connect with the avant-gardes in Western and Central Europe but could not do so in any meaningful way because of a very real language barrier. So even if Japanese avant-gardists were reading little magazines from the Surrealists, German Expressionsists, Polish Constructivists, and Russian or Italian Futurists, they did not expect the reverse to happen. But that, in short, is one of the realities of this “worldwide network of little magazines.” It is separate and unequal, not everyone can or will want to belong, and as critics we need to account for the disconnections, the imbalances, and the isolation that happens when literary/critical delivery systems such as little magazines simply cannot deliver.