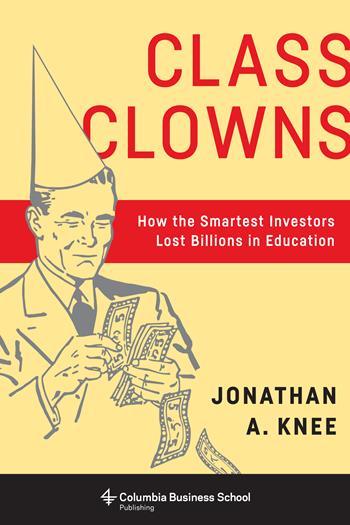 “Should anyone care that a bunch of very rich people have failed in these ventures? In fact, this should matter to anyone concerned about education. That failure, repeated so consistently, has given credible fodder to people who resist the active participation of for-profit enterprises in the educational sphere. But that sphere will always comprise public and private, nonprofit and for-profit institutions, and for-profit businesses play an essential role.” — Jonathan A. Knee

This week, our featured book is Class Clowns: How the Smartest Investors Lost Billions in Education, by Jonathan A. Knee. Today, we are happy to share an excerpt from “Why For-Profit Education Fails,” an article by Jonathan Knee that appeared in The Atlantic.

Don’t forget to enter our book giveaway for your chance to win a free copy of Class Clowns!

Why For-Profit Education Fails
By Jonathan A. Knee

[O]ver the past couple of decades, a veritable who’s who of investors and entrepreneurs has seen an opportunity to apply market discipline or new technology to a sector that often seems to shun both on principle. Yet as attractive and intuitive as these opportunities seemed, those who pursued them have, with surprising regularity, lost their shirts. JP Morgan backed Edison Schools’ ill-conceived effort to outsource public education in the late 1990s and saw the business lose 90 percent of its value during its four years as a public company; Goldman Sachs was one of many private-equity firms that came up empty after betting on the inevitable ascendance of for-profit universities; the billionaire Ronald Perelman shut down his futuristic K–12 educational-technology company, GlobalScholar, after spending $135 million and concluding that the software was faulty and a “mirage”; by the time the hedge-fund titan John Paulson was able to sell the last of his stake in Houghton Mifflin Harcourt, in 2015, he had likely lost hundreds of millions financing the company’s misguided mission to remake textbook publishing.

Not all financial investments in education end badly, but the number that have is notable, as are the magnitudes of the fiascos, in stark contrast to the successes of many of these same investors in other domains. The precise sources of failure in each instance are diverse, as are the educational subsectors targeted and the approaches pursued. But what many share is the sweeping nature of their ambition.

You can see this ambition in both the scale and the scope that many of these ventures sought out—often simultaneously. Scale can be an important driver of sustainable profitability, but it is striking just how many for-profit educational ventures—particularly those centered on bricks-and-mortar educational services—have confused scale, which is a relative concept, with absolute size. For services like day care and classroom education, local or regional density of operations can be advantageous, because it enables efficient management of personnel (by far the largest cost), the sharing of fixed expenses like marketing, and sometimes even pricing power. The benefits of a national footprint are seldom as obvious. Yet it is national scale that many ventures have sought. For example, Milken’s effort to roll up many of the nation’s day-care centers began in 1998 and reached its zenith with the $1 billion purchase of KinderCare in 2005. The inherently local nature of this business, however, ensured that its profitability did not improve as it grew larger. When Milken finally sold the business last year, he received less than what he’d paid for his day-care acquisitions over the previous 17 years.

Scope, meanwhile, can be the enemy of scale, particularly when pursued at the same time. Spreading investments across a variety of segments can impede the achievement of scale in any of them and also scatter the attention of executives. Time and again in education, big-name investors have launched companies with the broadest ambitions, only to be undone by more-focused players. For example, an early Milken investment wisely targeted a growing population of families who wanted to homeschool their children and were increasingly eligible for public funding through distance-learning charter schools. The business, founded in 1999 and called K12, managed the technology, teaching, and curriculum needed to deliver the full educational experience to kids online. The problem was that Milken wanted to do more than provide a technology-enabled service or run a profitable business; he wanted to transform education by also delivering an entirely new, proprietary, all-digital curriculum.

Yet despite the fact that ego and the drive for status are inseparable from many of these ventures, and that they are for-profit enterprises, my own study of these businesses and the people behind them strongly suggests a genuine—and in many cases intense—desire by the founders and investors to improve education. That desire is often associated with deep-seated beliefs about what is wrong with the current system. The evidence suggests that the intensity of desire and belief can cloud the judgment of even the most sophisticated investor. The pursuit of high-minded ideals and the belief that the status quo is so bad that it can’t be hard to improve upon causes many investors to devalue execution—yet execution is particularly crucial to the survival of organizations that take on overly broad mandates.

Should anyone care that a bunch of very rich people have failed in these ventures? In fact, this should matter to anyone concerned about education. That failure, repeated so consistently, has given credible fodder to people who resist the active participation of for-profit enterprises in the educational sphere. But that sphere will always comprise public and private, nonprofit and for-profit institutions, and for-profit businesses play an essential role. Public-sector funding is subject to political whims, and the nonprofit sector’s funding sources are also typically uncertain. Advocates of for-profit education often understandably emphasize the role that market forces play in improving quality and efficiency. But the most constructive role the for-profit segment may play is in providing a unique level of stability to the educational ecosystem when (and only when) it establishes sustainable business models.

Read the article in its entirety at The Atlantic.