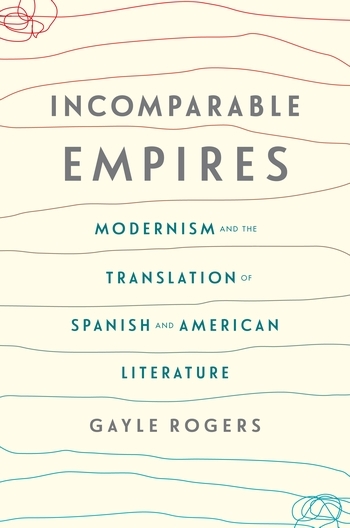 “But we should ask ourselves why we (and anyone, globally) might wish to study foreign literatures? To make ourselves better, more well-rounded humans? That’s a lofty and often immeasurable goal. To understand better the cultures that we fear, the cultures of the markets our country is entering, to understand our own syncretistic pasts? All complicated, too. And then, how much is enough?”—Gayle Rogers

The following is an interview with Gayle Rogers, author of Incomparable Empires: Modernism and the Translation of Spanish and American Literature:

Question: What was the role of empire in shaping how Americans saw themselves and their culture over the past century?

Gayle Rogers: I have always had a profound interest in the Spanish-American War of 1898, the “splendid little war” that set into motion many trends that are still unfolding in our contemporary moment. I came across this amazing speech from 1899 by William Graham Sumner, a famous sociologist and anti-imperialist. It was called—and this is not a typo—“The Conquest of the United States by Spain.” Sumner believed that this new stage of American imperialism, marked by the country’s first overseas interventionist war, would ultimately ruin the country, just like imperialism had ruined Spain over the course of several centuries. He claimed that the United States had “beaten Spain in a military conflict” but was “submitting to be conquered by her on the field of ideas and policies.” In other words, we were on a course to become the new Spain—a formerly great empire that had gradually lost all of its foreign territories (including large swaths of the United States itself) and, at the turn of the twentieth century, found itself bankrupt, broken, and largely forgotten on the world stage.

This notion that a growing empire would cause America’s cultural ruin led me to the larger issues that this book takes up: namely, the relationship between geopolitical power (often exercised through imperialism) and literary eminence. A common narrative holds that the United States was a minor or second-rate literary scene at least until the late 1800s—that we were derivative, that we mostly imported British and French texts that held higher and more enduring cultural value. And then, we emerged onto the global literary stage right around the moment that we began acquiring overseas territories, consolidating our new territories and states in the west and southwest, and intervening all across the western hemisphere. In essence, against Sumner’s claims, American empire meant the birth of a globalized American literature.

GR: The Spanish-American War looks like a well-placed axis in which the United States surges and Spain declines, with geopolitical and literary fortunes neatly yoked together in both cases. Of course, it’s not so simple, and as I knew from reading a good deal of literature of the early twentieth century, many leading authors believed that such a narrative was either horribly misleading or, if accurate, the signal of a terrible future for America in particular.

Q: To what extent are the imperial fortunes of Spain and the United States unique, or how do they speak to larger cultural or literary questions?

GR: I realized that this case study—the U.S. and Spain—actually framed a host of larger issues about the way we write literary histories: the models and assumptions we rely on, the trajectories and paths we follow in them. The modernist author John Dos Passos looked at the state of literature in the mid-1910s and concluded that great eras of empire actually strangle fruitful literary production, and so, he hoped that America’s new empire would quickly collapse in order to allow its literature to truly flourish. He saw a model in post-imperial Spain, where his peers like the novelist Pío Baroja were headlining what he believed was a new golden age of Spanish letters in the wake of an empire’s collapse.

Q: So, why do we assume that countries and their literatures thrive together?

GR: It’s almost like Social Darwinism applied simultaneously to two distinct fields, and it has a number of precedents in the thought of figures like Matthew Arnold. Literature, of course, is not simply an expression of power in some form. As I began studying that problem, I then realized that a number of modernist writers from America, including Dos Passos, Ezra Pound, Langston Hughes, and Ernest Hemingway, were also taking up similar questions. And furthermore, they did so through this newly emergent field of Spanish literary studies in the United States, or the practice of Hispanism. (Pound even began a Ph.D. with a dissertation on Lope de Vega before dropping out.) And, by the same token, Spanish writers like Juan Ramón Jiménez and Miguel de Unamuno were seminal figures in the foundation of American literary studies in Spain. And that symmetry led me to the chapters of this book.

Q: Why were these writers looking to one another’s countries?

GR: Pound, Dos Passos, Jiménez, and many others—all better known for their novels or poems—were lifelong translators of various types. They looked at these new fields in which they were participating (American Studies and Hispanism) and saw a number of problematic claims about the exceptionalism of each country, about each country’s “destiny” and fortunes. They questioned why Spain’s Golden Age of Cervantes and Lope de Vega coincided with the country’s acquisition of New World territories, and whether that was simply an accident of history. They used their own translations to rethink what counts as “great” literature, what constitutes a “movement” or a historical period. In the end, they all asserted that we had to see literature as more than a reflection of certain political conditions or imperial states.

Q: What do you see as some of the pressing scholarly or intellectual issues at stake in your work?

GR: There is plenty of truth in the idea that America rose and Spain fell in the twentieth century—who would deny that?—but accepting that as a literary and scholarly truth uncritically has even led contemporary scholars, I argue, to distorted views of our shared cultural past. The figures I study believed that America and Spain were uniquely entwined, that they shared some sort of cultural destiny together: Dos Passos even imagined his own work as a continuation of Don Quixote!

We don’t want to fall into a trap in which any such claims are treated as either cultural imperialism and appropriation or culturally subservient mimicry. But we should ask ourselves why we (and anyone, globally) might wish to study foreign literatures? To make ourselves better, more well-rounded humans? That’s a lofty and often immeasurable goal. To understand better the cultures that we fear, the cultures of the markets our country is entering, to understand our own syncretistic pasts? All complicated, too. And then, how much is enough? What does it mean to be an “expert” on a foreign language or its literature, and why? Is reading in the original tongue somehow more ethically “pure” than reading in translation? These are difficult, fraught questions that I grapple with myself, and I hope this books shows how volatile and urgent they have been across the past century and beyond.

Q: How did the geopolitics of the period affect what kind literature was translated in English?

GR: While I had always known that the early twentieth century was a period of intense nativism in both America and Spain, I was surprised to see how stringent the restrictions on translations and foreign-language materials were in both countries. In the United States, fears of Bolshevik double agents and Italian anarchists meant that even translations had to be approved by the postmaster before they could be distributed, and longtime multilingual places like Louisiana and Texas passed new laws prohibiting schools from teaching French or Spanish. And then, in almost an instant, German culture became radically demonized during World War I and was banned across many schools—and suddenly, Spanish enrollments see a 700% spike, and scholars urge that Americans should reclaim their own Spanish past from the days of the conquistadors by studying Spanish literature. These were really amazing developments, and modernist writers felt them palpably.

My book aims to bring this world to life—to show how famous authors were writing in multiple languages, translating all the while, and intervening in some very intense, protracted debates about the shape of their countries’ futures and the status of non-native writing in their literary canons. In the end, it’s too simple to claim either that literature and empire go hand in hand or always diverge: rather, they are locked in an uneven, reciprocal relationship that translation practices are constantly reshaping, even now.