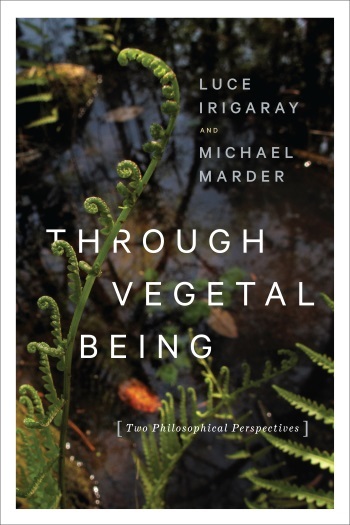 “We must return to our natural surroundings and our natural identity, not to fall again into a wild state—as people who do not understand what is at stake here claim ironically—but to discover how we could share in a global and multicultural context without harming our own life or that of other (human or non-human) living beings.” — Luce Irigaray and Michael Marder

Don’t forget to enter our book giveaway for Through Vegetal Being!

Toward an Ecology of Sharing
By Luce Irigaray and Michael Marder

We live in a world which is perpetually on the verge of tightening, or altogether closing, its political and other human-made borders. Threats of terrorism, illegal migrations, and global epidemics are cited as some of the main concerns behind such a move. Indeed, key member states of the European Union have recently expressed the need of reviewing and reconsidering the Schengen Agreement which, with a few exceptions, had abolished passport controls on its territory. Fear of intrusions, fanned out of proportion by certain political factions, turns the world into clusters of sealed ghettoes and makes genuine sharing of it impossible. But a deeper source for these developments is the hegemony of a possessive attitude that regulates our relation to the places, in which we dwell, including our countries, cultures, and natural environments.

“Sharing the world”
There are several ways of understanding the expression “sharing the world.” The first (which, rather, ought to be written as “sharing out”) amounts to dividing up a whole into parts. In reality, our world is already divided up into many parts that form a whole – the lands, the seas, the sky… – and these are also composed of different parts – for instance, the mountains, the plains, the valleys, to speak only of the earth – which themselves contain or are inhabited by various beings, including the vegetal world, the animal kingdom, and humans. Humans have added to these natural distributions other divisions, be they territorial, political, cultural, or linguistic. Now, these divisions do not make up a whole so easily! The numerous conflicts that happen today in the world bear witness to such a problem: each part aims at becoming a whole, instead of partaking in a whole with others. Furthermore, the various partitions do not work together smoothly: a people can claim to be the owner of a country, but not, for all that, to be the owner of a culture, a religion, or a language. Defining and respecting the boundaries of each property has thus become a difficult undertaking because of the varied divisions that humanity has added to the natural partitions composing the world.

Sharing the world can also signify having the world in common. This meaning is often the one implied in discourses that appeal to a peaceful coexistence among people, to appropriate cross-cultural behaviors, to religious ecumenism, etc. No doubt, these sorts of discourses are preferable to those which give rise to conflicts and wars. However, they barely consider what we can really have in common. They remain a little moralistic and idealistic, without indicating how we could share, given the political and cultural divisions that humans have imposed on natural partitions.

Ecological instead of economic
Probably, we have no alternative but going back to our natural environment in order to be able to share, instead of increasing other stratifications that prevent this sharing. We must return to our natural surroundings and our natural identity, not to fall again into a wild state – as people who do not understand what is at stake here claim ironically – but to discover how we could share in a global and multicultural context without harming our own life or that of other (human or non-human) living beings. In this way, we would contribute to the development of life for all. This imperative asks of us to renounce our traditional claim to the domination of nature, outside or within ourselves, and to listen to it in order to cultivate our living environment and ourselves as living beings – a cultivation that is still lacking. It is then that we could become capable of sharing with respect for our mutual differences and of contributing to a new stage in the becoming of humanity that is required by our epoch.

Although we can take cues from our natural surroundings regarding sharing, this behavior itself is not a natural “given”. To cultivate sharing, we can, for instance, turn to our elemental milieu and draw inferences from how we partake of the atmosphere, breathing the air that envelops us. Rather than natural resources to be appropriated, clean air, water, and even the earth itself are the foundations for sharing, which can then be extended to relations between human beings. The same is true for plants that contribute to the regeneration of our surroundings, enriching the soil as much as the atmosphere. Starting from the sharing of organic and inorganic nature, it would be possible to elaborate a way of thinking and living that is ecological, instead of economic – in other words, non-possessive, non-appropriative, but participatory with regard to a greater whole, which is based on differences and encourages us to cultivate them.

The future will be one of sharing
Of course, it is particularly challenging to nourish political processes and institutions with ecological recommendations for a non-possessive relation to the world and to the others, whether human or non-human. More often than not, political decision-makers are deaf and blind to anything that cannot be directly translated into the terms of a purely economic logic. However, the urgency of learning to share beyond considerations paramount in our economies is such that the prospects for life on earth depend on it. If there is to be a future for the world at all, this future will be one of sharing, rather than appropriation. Simply put, only a sharing and shared world will still have a chance to exist.