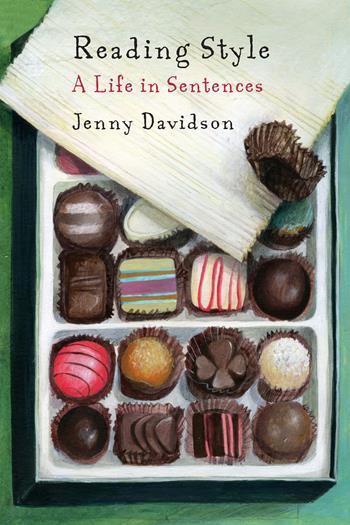 “Sentences are my obsession—I linger on them compulsively, it is the feeling of words in the mouth that got me hooked on literature in the first place as a very young child and I wanted to write a book that conveyed some of the magic of that way of reading.”—Jenny Davidson

The following is an interview with Jenny Davidson, author of Reading Style: A Life in Sentences, now available in paper:

Q: You’re a scholar of eighteenth-century English literature, a novelist, and a blogger; how did these three hats you wear inform your approach to writing Reading Style?

Jenny Davidson: From my point of view, those three hats—scholarship, fiction-writing, blogging—are part of a single fully integrated set of activities, and I wrote this book partly to show what that means for me as a reader and writer. The separation between scholarship and fiction-writing has always seemed to me largely artificial—I will write a novel because there’s a problem or topic that I’ve pursued as far as I can by scholarly means and want to think about further in a different medium, and the same thing goes in the other direction. Blogging is something I took up about ten years ago: it was largely for my own enjoyment, with some minor self-promotional aspect I suppose, but I found as I continued to do it that it became an excellent way to develop and refine an easy, fluent critical voice that I could then take back into the more formal kinds of criticism I also write.

Q: In an age of “big data” and “distant reading,” why have you decided to focus on the sentence?

JD: Not so much a choice as a compulsion, I think. Work by new media theorists and literary scholars like Lev Manovich and Franco Moretti is motivated in part by a sense of the insufficiencies of the kind of mainstream historicist literary criticism that predominates inside the academy in the United States. My own dissatisfaction with that kind of criticism increasingly stemmed from the sense I had that the kinds of interpretation I practiced in the classroom were at least as exciting and revealing as anything I was doing in my published scholarship, but that for some reason the professional protocol seemed to be that I couldn’t just “do” that kind of very close work with sentences in print. I’m kicking back against that here, and I’m interested in thinking more about how to explain and defend a methodology that is related to some older kinds of formalism—as practiced by critics like Roman Jakobson and Victor Shklovskii—and even to the New Criticism or Cambridge-style practical criticism in the tradition of I. A. Richards, but that also benefits from the insights of other more obviously historicized and politicized schools of criticism.

That is a fancy way, though, of saying that sentences are my obsession—I linger on them compulsively, it is the feeling of words in the mouth that got me hooked on literature in the first place as a very young child and I wanted to write a book that conveyed some of the magic of that way of reading.

Q: You begin the book by acknowledging that you’ve always been bothered by the notion that literature can “teach” us about life. What do we miss out on when we focus on the “lessons” of literature?

JD: That opening is a little bit tongue-in-cheek, in that obviously we do learn things about life from literature, and I have hugely enjoyed books like Alain de Bouton’s How Proust Can Change Your Life, Sarah Bakewell’s Montaigne biography and Rebecca Mead’s recent book about a lifetime of reading Middlemarch. But when it’s done with less sensitivity than these authors muster, it often leads to a kind of oversimplification—a lack of attention to what the books are actually doing, how they work—that makes me really annoyed. I will read novels by Austen or Henry James again and again neither because of the psychological insights they offer nor because of how those insights might illuminate aspects of my own experience in the world, but rather because the sentences are utterly ravishing, and because there is nowhere else on earth I can learn the things these books teach about narration and the techniques and conventions by which human experience is translated into language.

Q: Chapter 2 is intriguingly titled “Lord Leighton, Liberace, and the Advantages of Bad Writing,” so what are some of these advantages?

JD: The names in the title are drawn not directly from life but from one of my favorite novels, Helen DeWitt’s The Last Samurai, which among other things is a brilliant and profound examination of the relationship between morality and prose style. The kinds of bad writing DeWitt’s protagonist attributes to the characters she dubs “Lord Leighton” and “Liberace” are not redeemable. But other kinds of bad writing are, or at least that’s what I want to argue. George Eliot is a good bad writer, and so is Lionel Shriver: in the case of each of these authors, there is a kind of muscular intellectual force that bludgeons you and impresses itself on you at one and the same time. The sentences are often slightly cringe-worthy, but it is in aid of a greater good. Harry Stephen Keeler is another writer I single out for praise—the supposed “badness” of his writing really strikes me as a kind of imaginative strangeness that amounts at times to genius. If we always restrict ourselves to books written in the best possible taste, we risk losing a whole continuum of aesthetic and moral effects.

Q: Your book and your own reading are diverse, to say the least, and your book touches on writers as various as Proust and Stephen King, for example. Obviously different types of fiction offer us different rewards but what do we gain by thinking about these works together?

JD: I believe wholeheartedly that there is a place in any serious reader’s life for all sorts of different books. For good books and for great books, let’s say. Stephen King is probably a little underrated (like Joyce Carol Oates, he has written so many books that his reputation suffers!); but in terms of both goals and execution, King at his best outdoes almost any novelist I can think of. I’m partway through his new novel Dr. Sleep right now, and I might write more later in the week about the thoughts provoked by reading The Shining (to which Dr. Sleep is a belated sequel) and the new book in close succession. My life would be almost unbearably impoverished if I didn’t read space opera, urban fantasy, neo-noir, horror (it would pain me to give up any one of these, and the thought of a life without any of them is genuinely intolerable). There are writers in each of these genres who are as interesting and stimulating and enjoyable to read, and in some cases as brilliant and innovative (I am thinking here of a science-fiction writer like Lavie Tidhar or gonzo noir authors like Charlie Williams and Heath Lowrance) as the best literary fiction as well.

Q: Somewhat related to the first question, what can scholars and professors of literature bring to broader discussions of fiction in our culture?

JD: There are many things I love about being a professor, but one of the most precious is the privilege of taking the long view. I do read a fair quantity of new fiction, because I like to, but if I wanted to have a year when I didn’t read a single new book, I could easily do that as well, whereas a lot of people who work in the book business—i.e. many full-time reviewers as well as most agents, editors, scouts, etc.—find it genuinely difficult to carve out the time for reading anything that’s not of the moment. My deep intimacy with the eighteenth-century novel, or indeed with the long European literary tradition as it is instantiated in something like Columbia’s Literature Humanities sequence, gives me a wider set of contexts and liberates me from the need to be always up on the latest thing.

Q: You will be providing us with some book lists in the coming days but to get things started, what’s the best book you’ve read recently?

JD: I read Americanah, by Chimamanda Ngozi Adichie, last summer, and it’s stayed with me as a really exceptional novel. Nobody who follows contemporary fiction will be surprised to hear this, though, nor that I’ve most recently enjoyed the latest volume of Knausgaard and Edward St. Aubyn’s new novel, so let me recommend something else as well, something further off the beaten track. Delphine de Vigan’s novel Nothing Holds Back the Night: A Novel was recommended to me by the dance critic Marina Harss. It is an extraordinary piece of writing, and one of the most gripping novels I have read in recent memory, with an emotional intensity and vividness that made me think of David Copperfield and The Fountain Overflows, by Rebecca West, two of my favorite novels about childhood and family life—highly recommended.