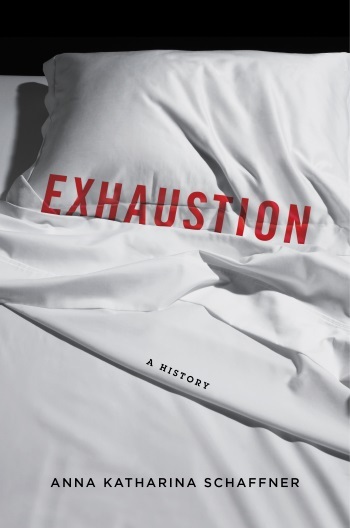 “To my surprise, I found that ours is far from being the only age to have perceived itself as the most exhausted—many people in the past have felt exactly as we do now…. anxieties about the exhaustion of our energies is a concern that reaches back all the way to the age of classical antiquity.”—Anna Katharina Schaffner

First, you can read her essay in Aeon Why exhaustion is not unique to our overstimulated age:

Analyzing the history of exhaustion, one can find historically specific theories of what causes exhaustion, as well as a tendency to look back nostalgically to a supposedly simpler time. However, the continual production of theories about the loss of human energy is also an expression of timeless anxieties about death, ageing and the dangers of waning engagement. Theorising about exhaustion, and proposing cures and therapeutics for its effects, is a tactic to counteract the awareness of our helplessness in the face of our mortality. It is, in other words, a terror-management strategy designed to hold at bay our most existential fears – fears that are in no way peculiar to today.

There was an excellent interview with Anna Katharina Schaffner in Psychology Today in which she ties the concept of exhaustion to our current environmental crisis:

The concept of exhaustion means that a limited quantity of something—usually something non-renewable—is used up in its entirety. In the context of mental and physical exhaustion, the entity that is being depleted is human energy. Current ecological debates about sustainability center around the idea that our planetary resources are being depleted at an ever more rapid rate, and that a critical point is being reached such that the planet will not be able to replenish them or repair the ecological damage. The greatest threat now is a terminally exhausted planet, a habitat that has become uninhabitable because it has been stripped of its vital resources, just like a worn-out human body. What is unique to our age is that the fear of exhaustion has for the first time been extended beyond the individual or the social to the environment. And unlike other anxieties about exhaustion, the threat of the irrevocable exhaustion of our environmental resources is one that would include everyone, young and old.

The book also received a very positive review in Psychology Today. In the following excerpt, the reviewer looks at Schaffner’s treatment of the fear and pride we associate with exhaustion:

Schaffner highlights not just what we’ve known about exhaustion at various points in history but why we’ve feared it, epitomized in her discussion of Bram Stoker’s symbolism-laden Dracula of 1897 and other Victorian vampire narratives. The villainous protagonists of these stories, she reminds us, were aligned with necrophilia, homosexuality, polygamy, fetishism, gynophobia, and oral sex, but their aristocratic mien and ability to suck the precious life energy from their victims led many observers, including Marx, to link them to capitalist exploiters.

Exhaustion astutely focuses on one particular wrinkle of energy depletion that modern readers will immediately recognize—the pride certain people have long taken in their alleged burnout symptoms. We all know people who insist on telling us every time we meet how worn out they are, how much they have to do—and, implicitly, how important and in demand they are