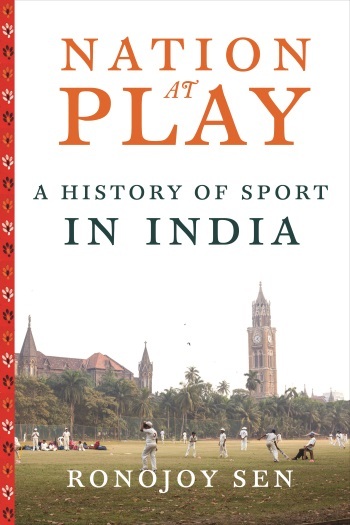 “Mid way through the discussion, the moderator asked how many in the audience had heard about the historic victory in 1911 of an Indian team over a British regimental team in the final of what was then India’s premier soccer tournament, the IFA Shield. To my surprise only a few hands went up.”—Ronojoy Sen

The following is a post by Ronojoy Sen, author of Nation at Play: A History of Sport in India:

When the Empire Struck Back
By Ronojoy Sen

It was a crisp winter afternoon and the setting was Asia’s, if not the world’s, largest literary festival. I was one of the speakers for the panel titled, India at Play, at the 2016 edition of Jaipur Literary Festival. The panel’s title was borrowed from my new book, Nation at Play: A History of Sport in India. My co-panelists included two former captains of the Indian soccer and cricket teams. Not surprisingly, it was standing room only at the open-air venue where the event was being held. Mid way through the discussion, the moderator asked how many in the audience had heard about the historic victory in 1911 of an Indian team over a British regimental team in the final of what was then India’s premier soccer tournament, the IFA Shield. To my surprise only a few hands went up.

The 1911 event is one event that I highlight in my book. The two teams that battled it out in the final were Calcutta’s Mohun Bagan and the East Yorkshire Regiment. Under the stewardship of Sailen Bose and the captain, Shibdas Bhaduri, a remarkable student of the game, Mohun Bagan formed a team that could challenge the best of the British teams in India. Curiously, the team played precisely eleven players in the IFA Shield; that is, it had no bench strength in case of injuries. This was a real gamble, since ten players of the Mohun Bagan XI played barefoot, with, oddly enough, the only non-Hindu in the team, left back Rev. Sudhir Chatterjee, wearing boots. It is tempting to link Chatterjee’s religion and his boots, but it was more likely that he picked up the habit when studying abroad. Besides, if popular accounts are to be believed, every effort was made to deter the Bagan players, working in British-run organizations, from training for their team.

Although football is nowadays considered a plebeian sport in India and the rest of the world, the composition of the Mohun Bagan team was a good indicator of how enthusiastically upper-caste Bengalis had taken up sports. The team consisted of ten Bengalis, six of them Brahmins, and one player, Chatterjee, a Christian. The rest were upper-caste Hindus. Only one player, Bhuti Sukul, most likely came from outside Bengal, his surname a corruption of the north Indian “Shukla.” Despite belonging to the upper castes, the players were far from well off. Three of the team members were employed in government: Shibdas Bhaduri was a veterinary inspector; Manmohan Mukherjee worked in the Public Works Department; and Habul Sarkar was a clerk in the Calcutta Corporation. Sarkar, in addition to being a footballer, played cricket for the City Athletic Club and was an accomplished hockey player to boot. Three of them were students: Rajen Sengupta and Abhilash Ghosh studied at Scottish Church, and Kanu Roy was at Presidency. Nilmadhab Bhattacharjee was with the Bengal National Bank, and the goalkeeper, Hiralal Mukherjee, once had a menial job at the Martin Brick Company. Bijoydas (Shibdas’s brother) and Bhuti Sukul were partners in a small business, which, among other things, traded in opium. Chatterjee, who had a degree in education from England, taught at the LMS College in Calcutta.

This motley bunch began their IFA campaign by defeating St Xavier’s College 3–0, despite playing with ten men (Chatterjee was refused leave by his college to play). Bagan’s next opponent, the Rangers Club of Calcutta, was a tougher proposition. But on a slushy ground, which made playing with bare feet extremely tricky, Mohun Bagan edged the British team 2–1, the win riding on two goals by Shibdas. By now, Mohun Bagan’s supporters had begun to believe that they had a real chance of winning the Shield. In the quarterfinal, Mohun Bagan had to face the Rifle Brigade, its first military opponent and the team that had knocked it out in the second round of the previous year’s tournament. The Statesman reported that a “vast sea of eager, excited faces thronged the galleries” well before the game began at 5.30 P.M. The game was a hard-fought affair, with Bagan winning 1–0, the only goal being scored by Bijoydas in the second half.

In the semifinal, Mohun Bagan was up against yet another military team, the Middlesex Regiment. The Englishman reported that “Bengali Calcutta had gone football mad” and that attendance in offices in the city on match day was thinner than usual. The game ended in a tense 1–1 tie, with the English team scoring a disputed goal (many believed that the referee was biased) in the first half. With no system of tiebreakers in those days, the game was replayed the next day, and Mohun Bagan convincingly triumphed 3–0, scoring all three goals in the last ten minutes of the game. A Times of India reporter wrote that the only subject of conversation wherever Bengali babus congregated was the “rout of the King’s soldiers in boots and shoes by barefooted Bengali lads.”

The stage was now set for the biggest game yet in Indian football: Mohun Bagan versus the East Yorkshire Regiment of Faizabad in the IFA Shield final on July 29, 1911. In the lead-up to the final, emotions had reached fever pitch in Calcutta and its surrounding areas. Tickets for the match, originally priced at Rs 1 and 2, were selling for as much as Rs 15, a small fortune in those days. Such was the enthusiasm that people came from outlying Bengal districts, as well as from neighboring Bihar and Assam. On the day of the match, the transport system was completely choked with spectators trying to get to the Calcutta Football Club field in the maidan. The East Indian Railway ran a special train, and additional steamer services were introduced to ferry spectators to Calcutta from the rural areas.

At the field itself, an estimated 80,000 to 100,000 people gathered. Because most of them could not enter the field, they were kept informed about the proceeding by an ingenious method. As the Reuters correspondent reported, volunteers kept the crowd informed of the progress of the match by flying a kite with the club colors when one of the teams scored a goal. The Empire, a local paper, had also installed a temporary telephone connection to the field to relay instantly the game’s progress. The weather gods were kind to Mohun Bagan—even though the monsoon had arrived, there was no rain on the day of the final, ensuring that the football pitch was dry and more suitable to playing barefoot.

The fifty-minute match, with a five-minute break at halftime, was thrilling. Both teams were scoreless at halftime. Then, with fifteen minutes left, the East Yorkshire captain, Sergeant Jackson, put his team ahead, but within minutes, Bagan’s captain, Shibdas, scored as well, triggering an explosion of maroon and green—Mohun Bagan’s colors—kites in the sky. With less than ten minutes before the final whistle, both teams pressed hard for the winning goal. It was center forward Abhilash Ghosh who caught an immaculate pass from Shibdas to put his team ahead 2–1, the final score. History had been made. Mohun Bagan had become the first Indian team to win the coveted IFA Shield. The football correspondent of the Amrita Bazar Patrika, the largest circulating English daily in Calcutta, reported: “The scene that followed was beyond description. Hats, handkerchiefs, umbrellas and sticks were waved and the tremendous cheering shook heaven and earth. It was as if the whole population had gone mad and to compare it with anything would be to minimise the effect.”

The reverberations from Mohun Bagan’s victory were felt way beyond the maidan. The IFA Shield final naturally was widely covered in the local press but also was cited in the international press. Reuters, the Times, Daily Mail, and Manchester Guardian all sent reports to London. Newspapers from outside Bengal, like the Times of India (Bombay) and the Pioneer (Allahabad) reported extensively on the victory. But it wasn’t just Mohun Bagan’s performance on the field that excited people. The local media, primarily the English and Bengali newspapers, read two things into the historic triumph: first, clear evidence that Bengalis did not lack physical prowess and, second, the nationalistic implications of the victory.