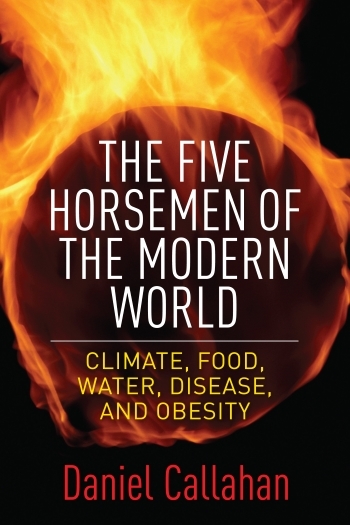 “At the heart of the progress problem is that we usually do not want to stop progress, and don’t know how to do so even when we need to try.”—Daniel Callahan

The following is an interview with Daniel Callahan, author of The Five Horsemen of the Modern World: Climate, Food, Water, Disease, and Obesity

Question: Why did you write this book?

Daniel Callahan: Most people write books because they have something to say: a careful analysis, a heated conviction, or a message to spread. Most scholarly savants usually spend years thinking through a topic and then put it all in a book. I don’t seem to fall easily into any of those categories. I wrote The Five Horsemen out of sheer curiosity, knowing something about some of my five horsemen but almost nothing about others; and not knowing where it would lead me. My curiosity was stimulated by what seemed to me a troubling similarity: a rare group of global problems, each seemingly different, that were all getting worse not better. How has that happened, and could it be that they do share some traits

Q: Do you offer solutions to the global threats posed by the five horsemen?

DC: My flat, candid answer to that question is: no! Initially, I naively thought, I could, being the kind of smart guy who thinks he can solve all human problems if simply given the chance to do so. It soon became obvious that I could not do that, but was consoled to notice that no one else could either. I should have seen at once that problems festering for forty or more years, that had consumed billions of dollars in research and policy efforts, that evoke deep ideological and political differences, and that display a wide range of disparate convictions in public opinion, do not lend themselves to easy solutions. If you don’t believe that, read the book. That is not to say there is an absence of ideas. It is that most have not worked, and those that have are not sufficient.

Q: Why are they so hard to solve?

DC: At the root of each of the horsemen is the modern value of progress, but reaching back to the eighteenth century. At its core is the belief that through reason and science the human condition can be improved. There is no end of the possibilities. Global warming is the result of economic progress, bringing millions out of poverty and affluence to many more. It also pollutes our atmosphere. Food shortages are in great part due to population growth, a result of medical progress keeping people alive much longer. Waters shortages also result from population growth and great agricultural gains (70% of water consumption is for agriculture). Chronic illness is heavily due to aging populations, another fruit of medical progress. Obesity is a function of the availability of cheaper but less health foods. At the heart of the progress problem is that we usually do not want to stop progress, and don’t know how to do so even when we need to try.

Q: How can we change people’s behavior and values?

DC: If the desire for progress is a root cause of the five horsemen, how do we get individuals and societies to change their harmful ways? Not easily, for what we need to change is I call “life as usual,” built into the fabric of our affluent societies and fervently desired by poor countries. To deal with global warming and environmental degradation we must be willing to accept government regulations and laws that may reduce industries and income and jobs. The same will be true of efforts to save water and keep it clean, and to find ways to produce more and better foods on less and less land. The care of the chronically ill is expensive and a major source of the cost of care for the growing number and proportion of the elderly around the world. Ways will have to be found to ration the most expensive forms of high-tech care; and that will be resisted. Efforts to control obesity have, with only a few exceptions, met strong and usually successful resistance to either tax unhealthy foods or to regulate access to them.

Q: You do not seem to be offering any easy ways out of our life as usual. Is there any way out?

DC: I would like to say yes. At least with some of the horsemen there is the possibility of some grand technological breakthrough—the most favored way in our progress-driven world to gain the high ground. Global warming has that possibility: effective technologies are already available, even if costly. That is less so with the other horsemen, but all have some chance, save for obesity. In the end, however, the concern and anxiety over the five horsemen will have to rise to a much higher level than is now present. All countries take the five seriously, but none with any of them at a high priority level or great immediate urgency. The fact that the worse possibilities of harm mainly lie in the future is easily overshadowed by more immediate needs, not at all helped by the cost and public resistance to drastic changes now.

Global warming reduction efforts have shown the greatest advances, but still with a long way to go; the others lag. I wish I could offer a more hopeful, more promising message. But as I learned from my work on health care, the first thing you should ask of your doctor when you are feeling sick is a good and careful diagnosis, giving you bad news if that is the truth. That’s what I have tried to do. But the next step is to want to be cured of the sickness, and to be willing to put up with pain and discomfort if that is what it will take to get well. We have not reached that stage with the resistant horsemen—even though we have good clues about how to do that if we have the will to so. But the longer we delay the worse the illness.