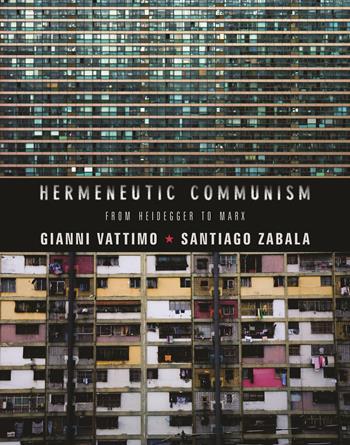 The following is a blog post by Santiago Zabala, coauthor of, among other works, Hermeneutic Communism: From Heidegger to Marx:

What Is Intellectual Freedom Today?
By Santiago Zabala

In order to respond to this important question, it is first necessary to emphasize that there isn’t much difference among philosophers, theologians, scientists, or artists when it comes to intellectual freedom. Whatever the training, traditions, or debates the intellectually free are those who know how their disciplines are framed. For example, when the scientist Laurent Ségalat, in his book La Science à bout de souffle?, criticized how the management of funds has become more important than search for truth in his field, he was both pointing out what frames his discipline and also exercising intellectual freedom. Only those who thrust us into the “absence of emergency” are intellectually free today.

When Martin Heidegger said in the 1940s that the “only emergency is the absence of emergency,” he was referring to a “frame” (“Ge-stell”), a technological power that had grown beyond our ability to control it. Today this framing power is globalization, where emergencies, as Heidegger specified, do not arise when something doesn’t function correctly but rather when “everything functions . . . and propels everything more and more toward further functioning.” This is why he was so concerned with the specialization and compartmentalization of knowledge that would inevitably limit and frame independent and critical thought. So to be intellectually free today means disclosing the emergency at the core of the absence of emergency, thrusting us into knowledge of those political, technological, and cultural impositions that frame our lives.

The recent passing of the philosopher Umberto Eco, the musician Prince, and the filmmaker Ettore Scola ought to remind us how important intellectual freedom is. Their works have all resisted orthodox interpretations of artistic creation, social stereotypes, and fascistic discrimination. For example, in one of his most important books, The Open Work, Eco stress the artist’s capacity to leave elements of the work open to the public, and Prince (as writer Steven W. Thrasher recently pointed out in The Guardian), “expanded the concept of what it meant to be a man while also deconstructing the entire idea of gender.” And in films such as Il Sorpasso or A Special Day, Scola portrayed the lives of these “disaffected” or “socially awkward” people.

It is important to emphasize that Eco was not the only “intellectual” of this group. Intellectuals are not only those who write academic texts or teach in a university: quite the contrary. (Indeed, professors are often unable to research freely, as illustrated in the recent book Who’s Afraid of Academic Freedom? through the words of renowned scholars such as Akeel Bilgrami, Judith Butler, and Noam Chomsky.) Instead, an intellectual is someone able to meaningfully disclose ideas to a variety of people. Whether this is done through philosophy or art is secondary. What is important are the effects. If “the duration of a work’s power to speak directly is fundamentally unlimited,” as Hans-Georg Gadamer asserts, it is not because of “the source or origin of the work” but because of the effects and consequences “it continues to have.” Prince and Scola expressed their ideas through music and films. But they, too, had to make an effort to preserve their intellectual freedom, their autonomy to think and create unfettered by the frames of their time.

As you might have perceived by now, my position is that we are not as free intellectually as Eco, Prince, and Scola were. I’m not saying that there are no longer significant thinkers or artists but simply that there are greater intellectual restrictions that now frame our imaginations, economic and cultural systems that have developed as part of the globalizing design to frame our lives. If Theodore Adorno, after the Second World War, was alarmed that music had to be cut in order to fit the temporal limits of the industrially produced LP, which he thought would in turn condition musicians’ creations, we ought to be terrified that contemporary philosophers are asked to cut their books into articles to fit the requirements of the ranked-journal industry or that musicians and filmmakers have trouble independently distributing music or movies that last more than two hours.

It’s true that Eco, Prince, and Scola were all productive until recently. But their later works, as is the case with many others (think of Julia Kristeva, Tom Waits, and Lars von Trier), often appear as eruptive events, emergencies within the farming devices of the publishing, music, and film industries. This does not mean these later works are better than their earlier creations but that they emerge as something distinct within the absence of emergency, something that merits our attention. But the problem today is that this attention is also being framed. “The lack of a sense of emergency,” Heidegger explains, “is greatest where self-certainty has become unsurpassable, where everything is held to be calculable, and especially where it has been decided, with no previous questioning, who we are and what we are supposed to do.”

We have become accustomed to expect from philosophers, musicians, and filmmakers ideas and feelings that will not upset or alternate the status quo. In an intellectually free world it would not be necessary, but given the condition we find ourselves in, where the passing of philosophers, musicians, and filmmakers who opened new worlds is mourned as an emergency, it becomes vital for our future.