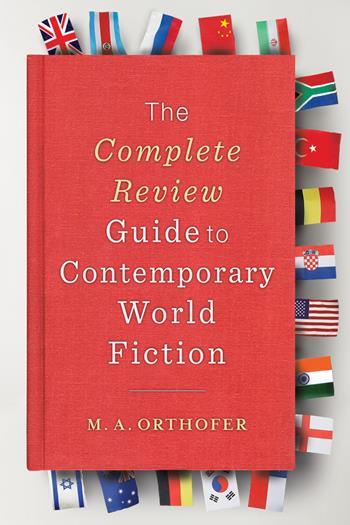 “There does seem to have been a definite move from larger publishers dominating publishing translations into English to smaller, more nimble independents and non-profits taking the lead in the field, and I think the future success of fiction in translation depends on their continued viability.”—M. A. Orthofer

The following is an interview with Michael Orthofer, author of The Complete Review Guide to Contemporary World Fiction:

Question: Your site has become legendary in its ability to stay on top and find the most exciting new works in global fiction. How do you do it?

M. A. Orthofer: It all starts with reading as much as possible—though ironically, working on the site cuts into my reading-time (though I think I would complain about finding too little time to read, even if that’s all I did all day). I’ve also always read very widely—fiction in every category, from every corner of the world, from any language—and have always been eager to seek out new and different voices, approaches, stories. Many readers seem to find specific areas or periods or styles or genres they’re most comfortable with and concentrate much of their reading on these, but I’ll read pretty much anything, and I think that has made a big difference, as the site (and now the book) reflect that and offer something for everyone.

And while I’ve always tried to look beyond the merely local and familiar, the internet, with its easy access to information and writing from everywhere in the world, has obviously helped expand my own horizons tremendously.

Q: What are you seeing as some of the most noteworthy trends in global fiction?

MAO: One of the great things about international literature is that there is such incredible variety, and so not even hot trends like magical realism, “Da Vinci Code”-type thrillers, “Harry Potter”-like fantasy, or Nordic crime fiction can completely crowd out everything else. Success does breed a lot of imitation, locally and internationally, and there are certainly still too many instances of foreign writers trying to follow the formula of the biggest American and British best sellers, but I think there has been a distinct move back towards relying on local strengths—be that language, history, mythology, tradition—in foreign writing too. Crime fiction is probably where this is most visible, with other countries and cultures putting more of a local spin on stories again—which has certainly worked for writers from the Scandinavian countries.

A curious trend as far as books in translation in America (and the UK) goes does seem to be the rise of the short work of fiction, as I can’t remember ever seeing as many translated novels and even story-collections in the hundred-page range. There are still lots of big works being published—not least the multi-volume epics by Karl Ove Knausgaard and Elena Ferrante—but the small, slim volume of fiction in translation has become much more common. I don’t think this is a real global trend—it seems limited to the US and Britain—and I assume one reason for it is simply that publishers are more willing to take on short works because they are considerably cheaper to translate.

Q: What is your sense of what and how much of international fiction is the English-speaking world missing? Are there many authors and books that English-language readers don’t have access to because of lack of translations

The number of books published in English translation is still so low—less than five hundred new works of fiction in 2015, according to the Three Percent database—that it’s impossible not to conclude that we are missing a tremendous amount. It looks to me very much like a tip-of-the-iceberg situation—compounded by an uneven distribution of what gets translated. BecauseAmerican publishers are so reliant on outside financial support for the additional cost of translating works, those countries that are able and willing to subsidize the translation of their literature are far-better represented in translation. As a result, fiction from many European countries, or South Korea and Japan, is much better-represented than that from countries and languages that haven’t invested in subsidizing translation—or aren’t able to.

Q: How does the U.S. market compare to that of other nations? Are there more translations of fiction available in places like France, Germany, Turkey, etc.?

The percentages are higher everywhere—far higher—but we have to remember that these are inflated by translations from the English (as English is, by far,the language that the most fiction is translated from, if not into). But even bracketing out translations from the English, there are markets where readers have much more to choose from, both in terms of variety (of languages books are translated from) and number of titles—most obviously France and Germany. Elsewhere, there is certainly more available from nearby countries and cultures—other eastern European literature throughout all the eastern Europeancountries, for example.

As far as variety goes, the US market is actually fairly diverse, with at least some titles translated from many different languages—more so than many smaller languages, which simply don’t have the capacity to translate from as many languages. (In fact, it’s not uncommon for books originally written in a less-widely spoken language to be translated into a “small” language via the English translation instead of directly—one reason why authors and publishers are so eager to see their works available in English.) Disappointingly, however, there is also quite a bit of literature in English translation that is only readily accessible to those who put a lot of effort into seeking it out: a great deal of fiction translated from local languages in India (Hindi, Bengali, Malayalam, Tamil, etc.) is available in English, for example—but remains difficult to find outside of India.

Q: What do you think the impact of the increasing globalization of English have on world fiction?

English is the language practically all authors want to be published in—because it allows them to reach the largest possible audience—and is the most useful conduit leading to translations into other languages, and obviously English-speaking readers benefit from that. I’m not quite as thrilled by some of the consequences of this situation, such as that many foreign writers are also turning to writing in English, presumably reckoning that their chances are better via the direct route than through translation (given how little in translation gets published …). Certainly, there are some who have the necessary English fluency—but many all too clearly don’t. Similarly, I do worry that too many writers try to write for the American (or more generally the English-speaking) market, or in imitation of popular American fiction, rather than playing to their local strengths. On the whole, however, I don’t think the impact has been too negative, local literature across the world proving wonderfully resilient.

Q: Do you have a sense of why some authors in translation such as Knausgaard or Murakami catch on and others fail to? Is it a question of the work itself or are other factors involved

MAO: I think there are a variety of factors, including being the right book at the right time—as I think is the case with My Struggle. Personality and presence obviously help a lot, too—with Knausgaard and Elena Ferrante the two perfect current examples, as I think both are very forceful presences, even if in the case of Ferrante that is in the form of her determined absence. One difficulty with publishing fiction in translation is that is much more difficult to involve the author – in readings, book tours, etc.—but Ferrante and her publisher have used that rather spectacularly to their advantage.

I think it is even more so the case with fiction in translation than English-language writing that authors need to develop a following. It is (usually small) publishers standing behind the work over years that often builds to later success. Europa Editions published several works by Ferrante before she really hit it big with the quartet that begins with My Brilliant Friend, New Directions has fostered the careers of many foreign writers before they became more widely recognized, such as Javier Marías, and many of the independents like Open Letter or Deep Vellum have shown a commitment to specific authors which I think will eventually pay off—whereas larger publisher might have a one-and-done mentality if success isn’t immediate (and with fiction in translation it often isn’t).

Q: Are you optimistic about the future of fiction of translation in the U.S. and the English-language world? Will we get beyond the 3% mark, so often
cited, or will we see fewer translations in the year’s to come?

MAO: I am optimistic—though I don’t think that translations are likely to make up a significantly greater percentage of available titles: new technologies and the lowered barriers of entry to publishing mean that a great deal more originally written in English is being published, too, so the number of translations would have to increase greatly just to keep up.

There does seem to have been a definite move from larger publishers dominating publishing translations into English to smaller, more nimble independents and non-profits taking the lead in the field, and I think the future success of fiction in translation depends on their continued viability. If they can survive or possibly even thrive—as I hope they can—then the future looks bright, as the wonderful thing about smaller publishers taking the lead is that they seem to be willing to take more risks, which also is leading to more innovative and interesting fiction, and fiction from smaller countries and languages finally becoming available in English.

Q: Finally, what are you most excited about seeing at the PEN World Voices Festival?

MAO: As every year, I’m torn between so many events, but at least I’m guaranteed to get in a good dose of Mexican literature. Beyond that, I again look forward to the Monkey Business: Japan/America Writers’ Dialogue and then have the tough choice to make—because of the scheduling overlap—between the Edith Grossman: Making Translation Matter event, with its incredible line-up, and the smaller but exceptional Melancholy panel with Sophie Calle, László F. Földényi, and Wayne Koestenbaum.