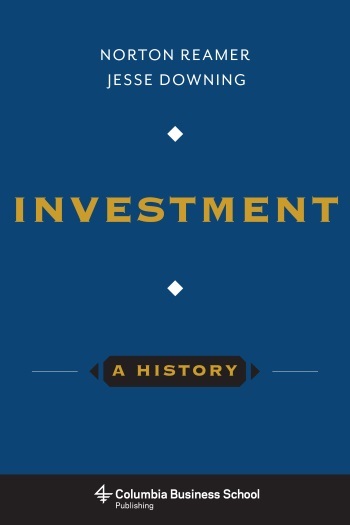 “Decade after decade, we see markets collapse and fortunes vanish for the same basic reasons. Most of the time the root cause is not some complex technical error. It’s just some new flavor of poor judgment.” — Norton Reamer

This week, our featured book is Investment: A History, by Norton Reamer and Jesse Downing. In today’s post, Reamer and Downing break down the five investing mistakes that they see repeated again and again throughout the history of investing.

Five Archetypal Investing Mistakes Have Bedeviled Investors Through the Ages

For thousands of years, investors have been making the same mistakes over and over. So true financial literacy should include not just understanding the history of investment successes, but also investing failures. Unfortunately, the recent history of the financial crisis and Great Recession indicate that many investors—even professionals—have not learned those lessons.

“Decade after decade, we see markets collapse and fortunes vanish for the same basic reasons,” says Norton Reamer, co-author of the new book, Investment: A History (Columbia Business School Publishing, February 2016). “Most of the time the root cause is not some complex technical error. It’s just some new flavor of poor judgment.” Reamer is the founder of United Asset Management and Asset Management Finance, and he is the former CEO of Putnam Investments. His co-author, Jesse Downing, is an investment professional in Boston.

“In plain language, diversification means not putting all your eggs in one basket,” says Reamer. “One of the biggest advancements of the last few hundred years has been the ability to truly diversify one’s investments. Diversification is what makes modern investment portfolios tick.”

As a historical reference point, Reamer points to 14th-century Italy, before there was such a concept as “too big to fail.” Two major Florentine banking houses, the Bardi and the Peruzzi, poured a great deal of their capital into the wartime exploits of England’s King Edward III. When Edward defaulted, both banks failed.

According to Reamer, the goal of diversification is to ensure that even if one asset in the portfolio is underperforming, other assets are still potentially delivering gains. Both the Bible and Shakespeare reference diversification, and despite how ancient the wisdom may be, it can be hard to follow. Many homeowners have a significant portion of their wealth tied up in a single asset, such as a home, company-granted stock, or even a single asset class. To weather the inevitable vagaries of the market, one must diversify.

“As a largely cooperative species, we are primed to seek consensus. That impulse, though, is perilous to investing. The Dutch ‘Tulip Craze’ in the 1630s is the quintessential example of an asset bubble, but just in the past two decades we have seen asset bubbles in technology stocks and U.S. housing,” says Downing. “Bubbles happen when investor enthusiasm outpaces the fundamental value of an asset. Prices are bid up to unsustainable heights.” Downing says that investors can use basic investment principles, like focusing on fundamental value and being wary of consensus to avoid being swept up into investment bubbles.

Mistake #3: Inappropriate use of leverage

“Most of the world’s major fortunes have been made with an intelligent use of leverage,” says Reamer. “But the emphasis here is on the word intelligent. Leverage can magnify profits, but also losses. So it demands care, both in how much and where it is applied.”

He says that cautionary tales include the highly leveraged investment funds that invested in the housing bubble, and whose failures were the first economic dominoes to fall in the Great Recession. But he adds that smart investors, like Warren Buffett, have benefited from inexpensive sources of investible capital—at rates even lower than those available to the U.S. federal government by using insurance float. That kind of smart use of leverage has fueled the growth of businesses and the personal wealth of a great many investors.

“As long as people have been managing resources on behalf of others, there have been examples of conflicts of interest,” says Downing. He points to the 17th century and the East India Company as an example: superintendents in Japan traded for their own accounts while supposedly representing the Company. They lived in luxury despite receiving minimal salaries. Almost comically, the Company often mitigated the practice only by granting an exemption to the person in charge in return for an agreement to enforce the policy against personal trading on his subordinates. “Today, we have devised better mechanisms to promote investor alignment, but such principal-agent conflicts still do manifest themselves again and again, and can affect even the largest and most sophisticated investors,” says Downing.

“People need to take the emotion out of investing,” says Reamer. “When you let yourself be guided by emotion, you tend to invest based on unfounded biases, and you can make mistakes.”

Modern investment theory, and the discipline of behavioral finance specifically, has identified a wide range of biases, such as “recency bias,” which means that people make dangerous generalizations based on the immediate past. “Herd behavior” is the tendency for people to invest with the crowd. “Confirmation bias” suggests that people look for information to support existing opinions and discount information that contradicts their opinions.

“In all these examples, emotion clouds the investor’s judgment,” says Reamer. “Removing emotion as much as possible from investing decisions, large and small, can only benefit the investor in the long run.”