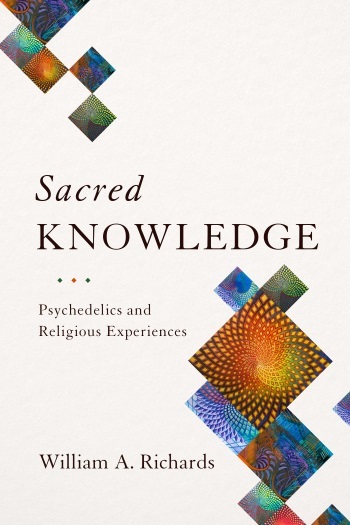 “For the ﬁrst time, I had encountered the limitations of language in trying to express mystical forms of consciousness.” — William A. Richards

This week, our featured book is Sacred Knowledge: Psychedelics and Religious Experiences, by William A. Richards.

Don’t forget to enter our book giveaway for a chance to win a free copy of Sacred Knowledge!

In Sacred Knowledge: Psychedelics and Religious Experiences, William A. Richards argues that, if used responsibly and legally, psychedelics have incredible potential to assuage human suffering and constructively contribute to the quality of life on our planet. In the preface, he recounts what transpired during his “ﬁrst deep foray into transcendental forms of awareness.”

When my own ﬁrst intense encounter with mystical consciousness occurred, I was a twenty-three-year-old graduate student of theology and psychiatry. Studying at the University of Göttingen in Germany, formally known as the Georg-August Universität, I had volunteered to participate in a research project with a drug I had never heard about called psilocybin. Synthesized and distributed to psychiatric researchers and clinicians by the Sandoz Pharmaceutical Company in Switzer­land, this new drug was the primary psychoactive substance in the psilocybe genus of mushrooms that indigenous peoples had called “magic” or “sacred” and appear to have used in their religious practices for at least three thousand years and perhaps since as long ago as 5000 BCE. On this date in the modern world, December 4, 1963, however, the dark ages of psychedelic research still prevailed and, in the context of Western psychopharmacological investigations, drugs like psilocy­bin usually were administered without preparation or guidance.

At the time, it was hoped that the radically different, sometimes disorganized or psychotic states of consciousness that often ensued, fortunately temporary in duration, would advance our understanding of schizophrenia and similar states of mind. Hanscarl Leuner, the professor of psychiatry conducting the investigations in the Nervenklinik in Göttingen, just had published a scientiﬁc monograph on his observations titled Die experimentelle Psychose (The Experimen­tal Psychoses). In those days psychedelic drugs were freely available to qualiﬁed researchers in Europe and in the United States, sent through the mail. Psilocybin was marketed as Indocybin. The distribution of LSD, known as Delysid, as stated in a 1964 Sandoz pamphlet, was simply “restricted to psychiatrists for use in mental hospitals and psychiatric clinics.”

Not only did I know nothing about psilocybin, LSD, or mescaline, I had not yet even heard the term “psychedelic,” though it had been coined seven years earlier by Humphrey Osmond, a British psychiatrist, in a letter to Aldous Huxley. However, two of my new friends reported to me that they had volunteered for an interesting research project in the nearby psychiatric clinic that entailed receiving an experimental drug. Its name was hard to remember, but it was reputed to provide some insights into early childhood. One friend had experienced himself sitting in his father’s lap and, since his father had been killed in World War II, this was profoundly comforting and meaningful to him. The other had seen visionary imagery of Nazi SS soldiers marching in the streets that he called “a hallucination.” I was intrigued and, being curious about the psychodynamic processes in my early childhood and having never seen a “real hallucination,” decided to walk over to the clinic and inquire whether I also could qualify as a participant in the research project. I viewed my own mind as a psychological laboratory in those days, took myself much too seriously, and sometimes went without breakfast to write down my dreams in the morning. Somewhat pompously, I called this discipline “collecting my phenomenological data.” (I was fond of big words then! In retrospect I realize that a healthy breakfast might have done me much more good.)

I found that I was permitted to apply and submitted myself to a cursory medical screening. I remember being asked if I got drunk very often (I didn’t). Then, informed I was acceptable, I was led to a rather dim and drab basement room, just large enough for a cot, an end table, and a chair. I met Gerhard Baer, a pleasant psychiatric resident about my age who wore a spiffy white coat with a stethoscope. After a brief chat, he gave me an injection of a derivative of psilocybin in liquid form. Though periodically observed during the next three to four hours, basically I then was left alone. Drawing on the piety of my Methodist childhood, I silently afﬁrmed trust that God would be with me should any difﬁcult childhood memories emerge.

To my utter amazement, I soon discovered in my visual ﬁeld the emergence of an exquisitely beautiful, multidimensional network of intricate, neon-like geometric patterns, drawing my attention ever more deeply within. I could see this display with open eyes, but found that when I closed my eyes it was even more vivid and sharply focused. I recognized life within the undulating designs and began to feel as though I somehow could enter into the energy ﬂowing within them. Soon, I felt immersed in incredibly detailed imagery best described as Islamic architecture and Arabic script, about which I knew nothing. Then (forgive the poetic license), I seemed to fully become the multidimensional patterns or to lose my usual identity within them as the eternal brilliance of mystical consciousness manifested itself. Suddenly this consciousness was experienced as outside of time, a pinnacle from which history could be viewed. My awareness was ﬂooded with love, beauty, and peace beyond anything I ever had known or wildly imagined to be possible. “Awe,” “Glory,” and “Gratitude” were the only words that remained relevant.

For a few moments “back on earth,” as garbage men emptied the clinic’s metal cans in the alley outside the room’s narrow window, I faintly registered tinkling temple bells. There were also a few minutes when Gerhard entered the room and asked me to sit on the edge of the cot with my legs crossed so he could test my knee reﬂexes. I recall complying with his request, silently holding my arms outstretched with open palms. Intently, he struck my patellar tendons with his little hammer and jotted down his ﬁndings while I felt what I later called “compassion for the infancy of science.” I was aware that the researchers appeared to have no idea of what really was happening in my inner experiential world, of its unspeakable beauty or of its potential importance for all of us.

When left alone again, immersed in awe, eventually my ego or everyday personality reconstituted itself enough to fear that I somehow might forget the utterly convincing reality of this magniﬁcent state of consciousness. Tentatively, I established again that my body indeed could move. Then, I stretched out my right arm to grasp a piece of blue paper on the end table beside me, picked up a pencil, and wrote, “Realität ist. Es ist vielleicht nicht wichtig was man darüber denkt!” (Reality is. It is perhaps not important what one thinks about it!) I underlined the ﬁrst “ist” three times.

After returning to normative consciousness about four hours after the injection and futilely trying to describe something of my experience to Gerhard, I walked slowly and thoughtfully back to my dormitory room in the Uhlhorn Studienkonvikt, a short distance away from the clinic. I climbed to the fourth ﬂoor, softly opened and closed the door of my room, and immediately lay prostrate on the wide, rough, highly waxed ﬂoorboards like a monk before an altar, speechless with reverence and gratitude. I was thankful for privacy, well aware that if others were observing me they might view my behavior as rather strange, if not downright crazy. Intuitively I felt that all was well and did not want well-meaning friends to worry about me.

A few days later, still in awe over what had occurred in my life, I looked at that little piece of blue paper. “What’s the big deal?” I thought. “Of course, reality is! Every idiot knows that!” It felt as though I had written “water is wet” and, for some reason, thought the insight was profound. Here, for the ﬁrst time, I had encountered the limitations of language in trying to express mystical forms of consciousness. I meant to capture primal, eternal being, what the Christian theologian Paul Tillich called “The Ground of Being” or perhaps what Buddhists mean by “The Pure Land,” something profoundly and intensely real that underlies the entire phenomenal, temporal world that most of us experience in everyday living. The words scratched on that scrap of blue paper were only an insipid souvenir from my ﬁrst deep foray into transcendental forms of awareness.

So the words in this book, much as they are intended to communicate as comprehensively and accurately as my literary skills allow, sometimes demand patience and poetic license from you, the reader. I offer you my best as we explore the edges of an incredibly fascinating and important frontier, even though a voice within me would prefer simply to play music for you instead—perhaps Chopin Nocturnes with their many subtle nuances of emotional expression, or the profoundly powerful yet joyful and playful Fantasia and Fugue in G Minor by Johann Sebastian Bach.