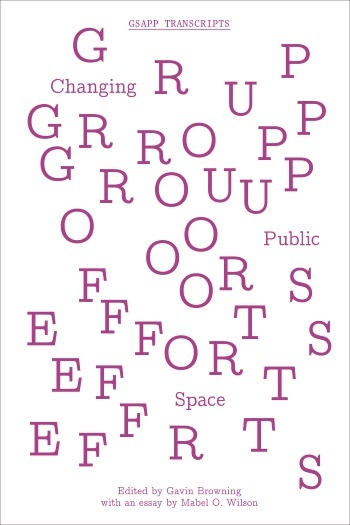 “Parks and streets are also stewarded by the private sector. Manhattan’s celebrated Bryant Park and High Line are operated by wealthy non-profit conservancies, while Business Improvement Districts (BIDs) balkanize the city into branded swathes…. The projects described here do not claim to redress the inequities that foreclose opportunities for so many. But crucially, I think, they ask us to be vulnerable, and to help each other.”—Gavin Browning

The following is Gavin Browning’s introduction to Group Efforts: Changing Public Space published by Columbia Books on Architecture and the City. The book includes interviews with leading with leading designers, architects, artists, and urban planners on public space:

Group Efforts: Changing Public Space traces perceptual, not physical, changes to public space. The three projects described within this volume did not break ground or leave marks on our city, yet the transformations they effected are real. They required only the willingness of individuals to gather and do things together.

I commissioned these works over the course of a year at the Graduate School of Architecture, Planning and Preservation (GSAPP) of Columbia University. They appeared within the framework of a series of lectures, debates, and symposia on the built environment, but unlike those traditional formats, happened in smaller groups away from the campus. Two of the three were collaborations with Elastic City, an organization dedicated to “mak[ing] its audience active participants in an ongoing poetic exchange with the places we live in and visit” through walks led by artists.

The people interviewed here work across media, and they translated their aesthetic sensibilities into group experience. Hayal Pozanti is a painter; Todd Shalom creates participatory performances; Greta Hansen, Kyung Jae Kim, and Adam Koogler are architects and designers; Karen Finley is a visual and performance artist. At the time, I did not see their work as a trilogy, even though that is how they are presented here. Rather, I viewed them as unique experiences—three distinct windows through which to see the myriad forces shaping public space and its use today.

Others have done this before them. In the 1970s, William H. Whyte and a team of researchers used time-lapse filmmaking techniques to explore how people used the plaza of the Seagram Building, observing that they made the modernist space their own. In The Social Life of Small Urban Spaces, Whyte notes how the harmonious arrangement of objects can facilitate civic exchange and daily dramas. New Yorkers sunbathed on ledges, catcalled from stairs and standpipes, fashioned ad hoc desks from trash can lids, and tied their shoelaces on fire hydrants. But “[w]hat attracts people most, it would appear, is other people.”

Many of the resulting urban design recommendations were adopted by New York City, leading to the creation of lively, accessible, and populated public spaces that offer relief from the grid and the grind. Today, Whyte’s conclusions might seem obvious. On a hot summer day, who wouldn’t value a shady place to sit and relax, to drink from a water fountain, admire beautiful landscaping and trees, and perhaps meet someone new?

But in the decades since this canonical study, much has changed about the funding and oversight of the public places in which we gather. Many of them now privatized, the quality of amenities and number of people using them are no longer reliable metrics of their publicness. In Rebel Cities, geographer David Harvey notes that in the mid-1980s, “neoliberal urban policy concluded that redistributing wealth to less advantaged neighborhoods, cities, and regions was futile, and that resources should instead be channeled to dynamic ‘entrepreneurial’ growth poles.” Just like the buildings that house multinational corporations, the privately owned public plazas, atria, and arcades that surround them are embedded within the movement of global capital—flows that exclude as they expand. From the shadows of the Time Warner Center at 10 Columbus Circle, Karen Finley suggests ways “to include more voices” in our experience of public space. “I’m applying psychological, therapeutic, and religious practice to the city as a way of diagnosing. The mandala will reveal, and the person reading through it will speak.”

Parks and streets are also stewarded by the private sector. Manhattan’s celebrated Bryant Park and High Line are operated by wealthy non-profit conservancies, while Business Improvement Districts (BIDs) balkanize the city into branded swathes. The care for local public goods such as clean sidewalks and well-lit streets has been outsourced to the private sector. Union Square Partnership, Fulton Mall Improvement Association, Bayside Village, and sixty-seven other such public-private partnerships across the five boroughs invest more than $100 million annually in district-specific programs and services. Inevitably, disparity arises. The essay at the back of this book by Mabel O. Wilson explores these uneven distributions for political agency and democratic urban life. She contrasts their implications with Inflatable General Assembly (IGA), a pneumatic pavilion for spontaneous political activity by Greta Hansen, Kyung Jae Kim, and Adam Koogler. With the IGA, “[Y]ou make your own space,” says Hansen. “If you’re here, you’re blowing it up. You’re part of the constant creation of the space itself.”

I see the outsourcing of care as emblematic of other trends in our individualistic society: skepticism of state-provided aid; fear of those who are different; the drive to amass personal instead of collective wealth. The projects described here do not claim to redress the inequities that foreclose opportunities for so many. But crucially, I think, they ask us to be vulnerable, and to help each other.

“Please take care of your partner.” Hayal Pozanti and Todd Shalom challenge us to close our eyes and traverse a city block, guided only by the sounds around us and someone by our side. “Walk toward what you want to listen to. Your ears are microphones. Feel free to take the arm or hand of your partner.”

Then, we switch roles. The blind leads the sighted toward a destination we will determine together in time. Eyes closed, we see the world anew.