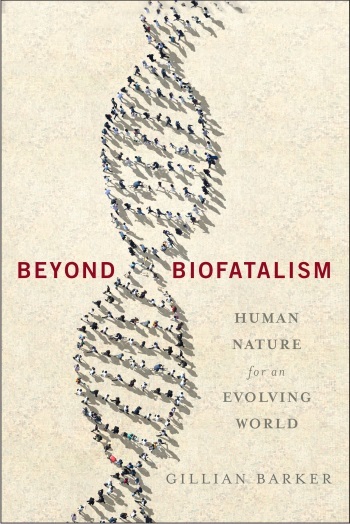 “To get beyond [biofatalism] is to begin to explore the evidence that human cognition and behavior are much more flexible in certain ways than [biofatalism] suggests, and so human societies are much more open to a range of possibilities than we often tend to think.”—Gillian Barker

The following is an interview with Gillian Barker, author of Beyond Biofatalism: Human Nature for an Evolving World

Question: What do you mean by “biofatalism”, and what does it mean to get beyond it?

Gillian Barker: When people are discussing aspects of today’s societies that seem to call for change—problems like racism, sexism, violence, economic inequality, and global warming—a certain form of pessimism is very common. We’ll never escape these problems, many people say, because they are an expression of tendencies that are “in our genes” or “hardwired” as a result of our evolutionary history. Sometimes this view is criticized as a form of genetic determinism, but that isn’t really a good label.

Most people who make claims like this aren’t genetic determinists; they think that environment makes a difference to human behavior. But they think that the environmental changes that would be required to create more peaceful, egalitarian, or ecologically sound societies would be extreme, requiring intolerable sacrifices. So according to this picture, our nature—the set of cognitive capacities and behavioral tendencies built by our evolutionary past—traps us in social arrangements that are unjust, unhappy, and ultimately unsafe. Not because environmental interventions are ineffective, but because we can’t stand the kinds of environments that would be needed to create better societies: no environmental change can save us from ourselves. That is biofatalism. To get beyond it is to begin to explore the evidence that human cognition and behavior are much more flexible in certain ways than this picture suggests, and so human societies are much more open to a range of possibilities than we often tend to think.

Q: Are you saying that evolutionary psychology is wrong about human nature?

GB: We can learn a great deal from human evolutionary history, but efforts to draw lessons from evolution for our thinking about human social and political choices have drawn on too narrow a selection of evidence. It is time to broaden our perspective to include insights from evolutionary biology more generally, from ecology and developmental biology, and from social psychology. These sciences can offer a picture of human nature that is quite different from the one most familiar in mainstream evolutionary psychology, and can give us reasons to expect that individual human behavior and human societies may both be surprisingly responsive to certain kinds of environmental intervention.

Q: Do you mean that nurture wins out over nature in shaping our psychology?

GB: No—as many others have also noted, these old metaphors of “nurture” acting to shape the material provided by “nature,” or of “nature” resisting the forces of “nurture,” are not very useful ones any more. The interaction between genes and environment is far more complex than they suggest. We are evolved to have “adaptive plasticity,” the capacity to adjust our own developmental patterns and behavior to enable us to succeed in different environments. But we are also evolved to modify our own environments, and each other’s—to engage in what some evolutionists call “niche construction.” The combination of these two evolved tendencies means that we should expect that human social behavior can be remarkably sensitive to some kinds of environmental variation, and remarkably resistant to others. We are only just starting to learn about these patterns of social response, but what is apparent that there is a lot to learn! The picture is much more subtle and interesting than the older “nature-vs-nurture” debate suggested.

Q: You say that pessimism about human possibilities is rooted partly in unexamined assumptions about values. What do you have in mind?

GB: When people say that certain kinds of social change could be achieved only at an intolerable cost, they are making presumptions about what to count as a cost, and about which costs are worth paying in order to achieve which kinds of outcomes. But of course these are contested questions. What one person counts as a cost may be a positive good to someone else. Who gets to decide? It is easy to imagine that our evolved human nature determines what is good for us in a way that can tell us how the costs and benefits of changes to our societies should be counted, but this picture is too simple. Our evolved plasticity means that our desires and preferences themselves change in response to different environments. So what seemed like a cost to people living in one environment may no longer register as negative once the environment has changed. This is related to what economists call the problem of “adaptive preferences,” but it goes deeper, because it involves not just how we think about our lives but how our brains and bodies develop in different circumstances. But preferences alone may not determine what is good for us. As economist Amartya Sen and philosopher Martha Nussbaum noted in relation to adaptive preferences, there are reasons to worry that some of these shifts in what people want are themselves are harmful to them. Noticing the importance of values in thinking about what kinds of society are compatible with human nature, and noticing how our values are themselves affected by our social environment, reveals that there is much more work to do before we can decide what evolution can tell us about what sorts of social changes would be good for people.

Q: It sounds like you think that your message is one people need to hear urgently right now. Why is that?

GB: We face urgent and intractable challenges as resources are depleted, the human population grows, populations of many other species decline, and global warming begins to show its effects. Human societies are certainly going to change in dramatic ways in the next decades, whether we want them to or not. To negotiate these challenges at all successfully we need to be able to bring about certain kinds of social change that many thinkers regard as impossible—to figure out how to cooperate with each other in ways we have never done on this scale. But the kind of pessimism that rejects these changes as impossible is simplistic and premature; we don’t yet know what the full range of human social possibilities is, or what kinds of interventions can be most effective in driving substantial social change. Difficult questions also remain about what kinds of social interventions are morally acceptable—or morally required. But evidence that can help us answer these questions and make the changes that we need to make is pouring in from evolutionary and developmental biology, ecology, and social psychology. We do need urgently to recognize the tools available to us, and the possibilities that they can open up.