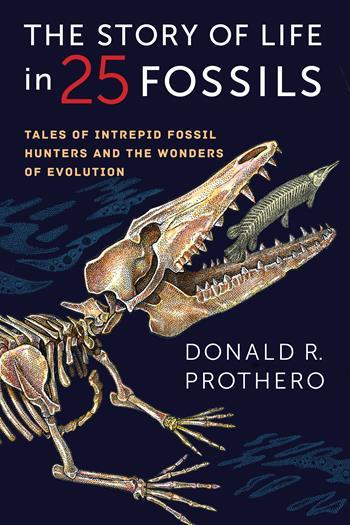 The following interview is with Donald R. Prothero, author of The Story of Life in 25 Fossils: Tales of Intrepid Fossil Hunters and the Wonders of Evolution:

Question: How do you summarize the history of life in just 25 fossils?

Donald R. Prothero: That was an incredibly difficult decision, since there are millions of species and thousands of different known fossil species. I tried to focus on fossils that represented important landmarks in the history of life, important transitional fossils that demonstrated the macroevolution of one group from another, and some of the most extreme examples of life illustrated by the fossil record: the largest marine reptiles and dinosaurs, the largest sharks, the largest land mammals, and so on.

Q: What does the fossil record tell us about evolution?

DRP: In the book, I describe many examples of “transitional fossils” (incorrectly called “missing links”) that demonstrate the evolution of one major group from another. This is sometimes called macroevolution, and its existence is denied by 40% of Americans who don’t accept the reality of evolution. We now have snakes with legs (including a four-legged snake fossil that was just published last month, too late for our book), turtles with half a shell (including a new transitional reptile more primitive than the turtles in our book, also published too recently for our book), a creature that is the link between frogs and salamanders, many fossils that show how fish crawled out on land to become amphibians, and many feathered dinosaurs that showed how birds originated from creatures like Velociraptor. These examples could go on and on, so the new book just discusses a few of them. Many more examples are given in my book Evolution: What the Fossils Say and Why it Matters (Columbia University Press, 2007).

Q: What does the fossil record tell us about the origin of animals?

DRP: In Darwin’s time, there were no fossils that showed how the oldest known fossils, such as trilobites, evolved from more primitive creatures. But in several chapters of this book, I talk about the first known fossils (primitive bacteria forming mats and domes called stromatolites, over 3.5 billion years old), the first multicellular animals from 600 million years ago, the first tiny, shelled fossils from 550 million years ago, and the earliest trilobites from 525 million years ago. Contrary to people who argue that the “Cambrian explosion” was an instantaneous event that required divine intervention, we now know it was a “Cambrian long fuse,” with all the stages from single cells to soft-bodied multicellular life to tiny shells to the first large shelled animals, all stretched out over tens of millions of years.

Q: What were the largest animals on the land and in the seas?

Q: What does the fossil record tell us about human evolution?

DRP: In this new book, I focus on two especially important fossils: the oldest known fossil of the human lineage, Sahelanthropus, from beds 6-7 m.y. old in Chad; and the oldest known relatively complete human skeleton, the famous “Lucy” fossil (Australopithecus afarensis), from beds about 3.2 m.y. old in Ethiopia. But in those two chapters, we learn about the panoply of over 6000 known human fossils that demonstrates the reality of human evolution, and how closely related we are to our kinfolk, the great apes.

Tags:Author InterviewDonald R. ProtheroEvolutionThe Story of Life in 25 Fossils: Tales of Intrepid Fossil Hunters and the Wonders of Evolution