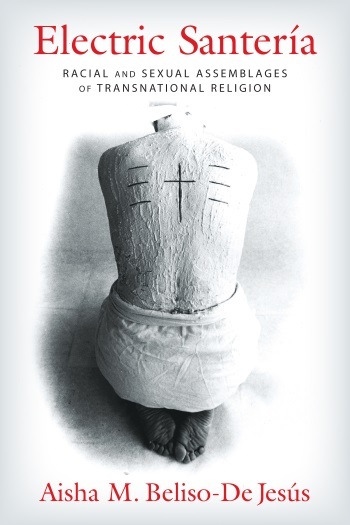 “Why do Santería and other African diaspora religions continue to bear the burden of racism? The perception that African (and hence black) practices are lesser than or unequal to Christian or Western forms of religion, has a long history justifying racist practices since slavery.” — Aisha M. Beliso-De Jesús

The following is a guest post by Aisha M. Beliso-De Jesús, author ofElectric Santería: Racial and Sexual Assemblages of Transnational Religion, that originally appeared on the Huffington Post’s BlackVoices blog:

The Blackening of Havana
By Aisha M. Beliso-De Jesús

With all of the excitement around U.S. and Cuban relations finally opening up there is a host of questions around race and religion that are fundamental to the lives of Afro-Cuban religious practitioners left to be asked. On a recent trip to Cuba, a Cuban academic told me that whereas Havana used to be a “white city” (read, prosperous and cosmopolitan), due to the large influx of darker Cubans from the campo, rural outskirts of the island, Havana is now a “black city” (read, ghettoized and full of crime). This “unfortunate” darkening of Havana was blamed on the influx of marginalized black Cubans trying to gain access to foreigners and tourism since the late 1990s. I was told that Santería, an Afro-Cuban religion practiced throughout the world, was partially to blame for this occurrence.

Santería, the most popular of the Afro-Cuban religions practiced on the island, has been one of the ways in which black Cubans have had the ability to connect to larger international communities, and most importantly, gain access to foreign currency, goods, and travel. Given Cuba’s position, as the birthplace of these practices, which fuses Yoruba and other African religious traditions with Catholic saints, travelers come from all over to undergo costly rituals, initiation ceremonies, and divination-based consultations with Cuban priests. Most of these priests are Afro-descendants, which in a country like Cuba that has tried to eradicate racism (and the idea of race itself), often makes for complex engagements with racial politics.

The Cuban Santería practitioners that I work with, mostly black, mostly marginalized, have had a very different experience with foreigners and remittances than their white Cuban counterparts. Even as great strides have been made by the Cuban revolutionary government to eliminate racial and gender discrimination, there is still the everyday occurrence where black and mulata Cuban women are presumed to be prostitutes and excluded from public locations such as hotels or nightclubs. Or, Afro-Cuban men of all different tones are seen as hustlers and criminals. The same white Cuban academic who lamented the blackening of Havana, also described that for her, “there was no racism” on the island. She told me, “This is the greatest place to be a black person. It’s going to take 50 or 100 years for blacks to reach the same intellectual and cultural level of whites. But, there’s no racism here.”

Santería is often given as an example of why blacks are perceived as intellectually and culturally inferior to whites. The religion is often inaccurately likened to devil worship, or sensationalized for its practices of animal sacrifice, and spirit possession. Even Cuban whites that practice Afro-Cuban religions are thought to be “black lovers” (negreros) or described as “backwards” (atrazados) due to their religious association with a black religion. Nevertheless, practitioners, aware of this racist criticism of their belief, defend their religion. They show a commitment to an alternative understanding of the world that highlights black and female deities, and solutions to life’s problems through ritual supplication, prayer, and the veneration of nature.

Like any other religion Santería practitioners are made up of a large gamut of diverse races, ethnicities, sexual orientations, national backgrounds, and political interests. American-based religious travelers to Cuba chose to continue to practice rituals on the island despite U.S. laws that greatly limit this exchange. What many practitioners have in common is a craving to understand the world from an alternative perspective. Santería gods are highly interactive: they sit, eat, and engage with practitioners through bodily possessions. They talk back to their adherents, give advice and remedies to health issues or financial concerns, and even comment on local politics. Rather than intellectually or culturally inferior, this alternative black Cuban practice might be better recognized as way to understand race, and the impact of racism on the island and abroad.

Why do Santería and other African diaspora religions continue to bear the burden of racism? The perception that African (and hence black) practices are lesser than or unequal to Christian or Western forms of religion, has a long history justifying racist practices since slavery. Yet this ethos that deems certain forms of humanity as morally superior and thus more enlightened, continues to be embedded in everyday thinking and racial politics. Just this month, an American Santería practitioner returning from Cuba through Mexico had his sacred religious deities (oricha) thrown away, with the customs agent in Mexico stating that he would have none of that “black witchcraft” in his country.

Racism is very much an everyday occurrence in Cuba and other parts of the Caribbean and Latin America, just as it is here in the United States. In the United States we are dealing with the effects of structural racism and violence on black lives at the hands of police, where it seems each day brings a new black victim at the hands of state violence. Even as black Cubans continue to live predominantly in lower standard housing arrangements, have less access to hard currency and resources, and their religious practices continue to be stigmatized as negative superstitions that hold back “progress,” the last time there was rampant death of black Cubans at the hands of white police was the 1912 “race war.”

As the United States attempts to hold Cuba accountable for its treatment of different marginalized groups in this opening up of relations, we would do well to think critically about racism and violence at home.