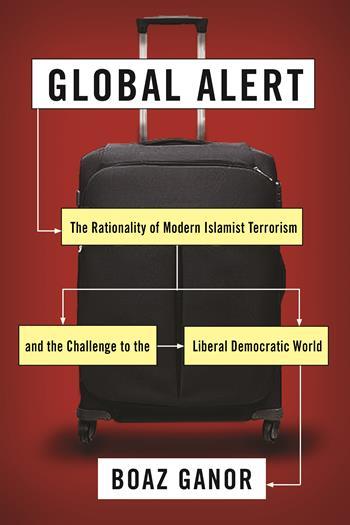 “We face an essential need to reach a definition of terrorism that will enjoy wide international agreement, thus enabling international operations against terrorist organizations.” — Boaz Ganor

This week our featured book is Global Alert: The Rationality of Modern Islamist Terrorism and the Challenge to the Liberal Democratic World, by Boaz Ganor. Following yesterday’s video, in which Ganor argues that we must have a definition of terrorism if we are to successfully confront increasingly complex terrorist organizations, today we have an excerpt from “Defining Terrorism – Is One Man’s Terrorist Another Man’s Freedom Fighter?,” an article by Ganor from the International Institute for Counter-Terrorism website.

Don’t forget to enter our book giveaway for Global Alert!

Defining Terrorism – Is One Man’s Terrorist Another Man’s Freedom Fighter?
By Boaz Ganor

Proposing a Definition of Terrorism

The question is whether it is at all possible to arrive at an exhaustive and objective definition of terrorism, which could constitute an accepted and agreed-upon foundation for academic research, as well as facilitating operations on an international scale against the perpetrators of terrorist activities.

The definition proposed here states that terrorism is the intentional use of, or threat to use, violence against civilians or against civilian targets, in order to attain political aims. This definition is based on three important elements:

1. The essence of the activity—the use of, or threat to use, violence. According to this definition, an activity that does not involve violence or a threat of violence will not be defined as terrorism (including non-violent protest—strikes, peaceful demonstrations, tax revolts, etc.).

2. The aim of the activity is always political—namely, the goal is to attain political objectives; changing the regime, changing the people in power, changing social or economic policies, etc. In the absence of a political aim, the activity in question not be defined as terrorism. A violent activity against civilians that has no political aim is, at most, an act of criminal delinquency, a felony, or simply an act of insanity unrelated to terrorism. Some scholars tend to add ideological or religious aims to the list of political aims. The advantage of this definition, however, is that it is as short and exhaustive as possible. The concept of “political aim” is sufficiently broad to include these goals as well. The motivation—whether ideological, religious, or something else—behind the political objective is irrelevant for the purpose of defining terrorism. In this context, the following statement by Duvall and Stohl deserves mention:
Motives are entirely irrelevant to the concept of political terrorism. Most analysts fail to recognize this and, hence, tend to discuss certain motives as logical or necessary aspects of terrorism. But they are not. At best, they are empirical regularities associated with terrorism. More often they simply confuse analysis.[14]

3. The targets of terrorism are civilians. Terrorism is thus distinguished from other types of political violence (guerrilla warfare, civil insurrection, etc.). Terrorism exploits the relative vulnerability of the civilian “underbelly”—the tremendous anxiety, and the intense media reaction evoked by attacks against civilian targets. The proposed definition emphasizes that terrorism is not the result of an accidental injury inflicted on a civilian or a group of civilians who stumbled into an area of violent political activity, but stresses that this is an act purposely directed against civilians. Hence, the term terrorism should not be ascribed to collateral damage to civilians used as human shields or to cover military activity or installations, if such damage is incurred in an attack originally aimed against a military target. In this case, the responsibility for civilian casualties is incumbent upon whoever used them as shields.

The proposed definition of terrorism also addresses a lacuna in present international legislation and international conventions, in order to develop a fundamental tool for international cooperation against terrorism. In order to achieve as wide an accord as possible, this definition must be founded on a system of principles and laws of war, legislated and ratified in many countries. In other words, in order to reach an accepted definition of terrorism, we must extrapolate from the existing principles of conventional warfare (between countries) to arrive at similar principles for non-conventional warfare (for our purposes, a violent struggle between an organization and a state). Many countries in the world support the view—and have enshrined this in international conventions—that we must differentiate between two types of military personnel who make use of force to attain their aims. On the one hand there are ‘soldiers’—members of the military who intentionally target members of rival armies, and on the other, there are ‘war criminals’—members of the military who intentionally harm civilians. This normative and accepted attitude toward military personnel operating in a situation of conventional warfare enables us to extrapolate to situations of non-conventional warfare (between an organization and a state), thus allowing us to distinguish terrorism from guerrilla warfare. As noted, terrorism is “a violent struggle intentionally using, or threatening to use, violence against civilians, in order to attain political aims,” whereas guerrilla warfare is “a violent struggle using (or threatening to use) violence against military targets, security forces, and the political leadership, in order to attain political aims.” Terrorism is thus different from guerrilla warfare in its mode of activity and in the targets chosen by the perpetrators. The only question to be resolved is whether perpetrators choose to attain their aims by targeting civilian or military targets?

We face an essential need to reach a definition of terrorism that will enjoy wide international agreement, thus enabling international operations against terrorist organizations. A definition of this type must rely on the same principles already agreed upon regarding conventional wars (between states), and extrapolate from them regarding non-conventional wars (between organization and a state).

The definition of terrorism will be the basis and the operational tool for expanding the international community’s ability to combat terrorism. It will enable legislation and specific punishments against those perpetrating, involved in, or supporting terrorism, and will allow the formulation of a codex of laws and international conventions against terrorism, terrorist organizations, states sponsoring terrorism, and economic firms trading with them. At the same time, the definition of terrorism will hamper the attempts of terrorist organizations to obtain public legitimacy, and will erode support among those segments of the population willing to assist them (as opposed to guerrilla activities). Finally, the operative use of the definition of terrorism. could motivate terrorist organizations, due to moral or utilitarian considerations, to shift from terrorist activities to alternative courses (such as guerrilla warfare) in order to attain their aims, thus reducing the scope of international terrorism.

The struggle to define terrorism is sometimes as hard as the struggle against terrorism itself. The present view, claiming it is unnecessary and well-nigh impossible to agree on an objective definition of terrorism, has long established itself as the politically correct one. It is the aim of this paper, however, to demonstrate that an objective, internationally accepted definition of terrorism is a feasible goal, and that an effective struggle against terrorism requires such a definition. The sooner the nations of the world come to this realization, the better.