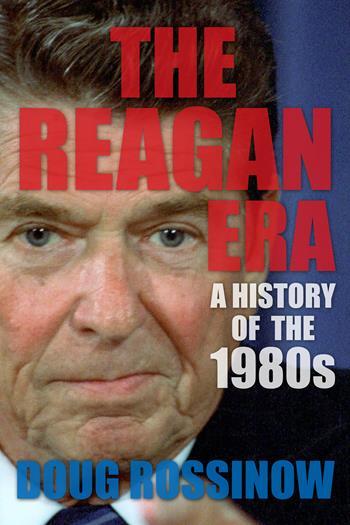 “We still live in the world Reagan and Reaganites made.”—Doug Rossinow

The following is an interview with Doug Rossinow, author of The Reagan Era: A History of the 1980s.

Question: Were the 1980s really “the Reagan era”? Is it possible to exaggerate the significance of one individual leader?

Doug Rossinow: The only other leaders in twentieth-century America who compare to Reagan, in terms of being personally identified with the eras when they served as president, are Franklin D. Roosevelt and John F. Kennedy, and maybe Teddy Roosevelt. I’d say that Reagan is more closely tied to our memories of the 1980s than Dwight Eisenhower is to those of the 1950s—and rightly so. Reagan is most like FDR: he helped shape as well as propel a political agenda and social vision that defined an era. Reagan really led a kind of movement, Reaganism, which captured the spirit of the age as well as a policy agenda.

Q: What were the characteristics or spirit of Reaganism?

DR: The key to that spirit—and to the agenda—was to elevate the status of wealth in America, and in policy terms to let the wealthy keep more of their money. A new celebration of wealth, and of capitalism, was pervasive in America during the 1980s—and, with a few hiccups along the way, it continued through the 1990s, really up until the Great Recession. Reaganism was a revitalized, energized conservative force in a very broad sense. There were Reaganite preachers and lawyers and even union leaders, not just senators and congressmen. Of course Reagan had a foreign policy agenda too. But since that agenda was driven by a newly aggressive anticommunist stance, the moral basis for Reaganism in domestic and international contexts was the same: upholding freedom, which Reaganites defined fundamentally in terms of the capacity to earn and keep wealth. In some ways we still live in the world Reagan and Reaganites made.

Q: Some people say that Reagan would have trouble getting nominated for president by today’s Republican Party, that he would seem moderate for today’s GOP, for example on an issue like immigration. Is this true? Has the Republican Party moved to the right of where Reagan was in the 1980s?

DR: Specifically on the issue of immigration, yes, Reagan’s policies would be out of step today in the Republican Party. He signed a 1986 bill that created an “amnesty” for about two million undocumented immigrants—he and others actually called it “amnesty,” which they could never do today. Reagan had a lot of sympathy with immigrants, perhaps tending to view them as people who believed in the bootstrap promise of American life in a way that many native-born Americans no longer did. He also was very libertarian at his core, and might have preferred, in a perfect world, to see open borders. So differences over immigration policy can be as much a question of which kind of conservative you are as of how conservative you are.

But more broadly, I’m not sure it’s true, in any meaningful sense, that Reagan and his GOP were more moderate than those of today. There were a larger number of moderate Republicans in Congress then, but their influence in their party was questionable. Most of them enthusiastically supported Reagan as their nominee in 1980, and when Reagan became president, the moderates went along with the essential items in his conservative agenda. The conservative agenda of today—or of George W. Bush in the 2000s—is only possible because of the conservative victories of Reaganism in the 1980s. I also think Reagan was a sufficiently skilled politician, with a keen enough sense of his own party, that if he were around today he would know how to pitch himself to Republican voters and activists.

Q: What is your biggest difference with other treatments of Reagan and the 1980s by historians?

DR: I have been surprised that other historians have let Reagan and his followers off so lightly in terms of their racial politics. This was a major part of Reaganism’s political appeal and it’s a major element in its legacy for America. In 1984, when Reagan was reelected president, 85 percent of those who voted were non-Hispanic whites. Reagan got two-thirds of the white vote that year, which is, in a way, all you need to know about the outcome. Reagan made a strong pitch to white Americans who were tired of hearing about racism and racial discrimination and thought liberals were too focused on helping African Americans. Reagan opposed every federal civil rights bill that ever came down the pike, from the 1964 Civil Rights Act onward. He thought Bob Jones University, which was explicitly segregationist, was a wonderful institution. It’s true that for much of his presidency Reagan soft-pedaled his hostility to civil rights law. He signed a 25-year extension of the Voting Rights Act into law. But this was before his reelection, and the politics just weren’t right—vetoing the bill would have been too aggressive, too overt, and there were differences in his party over this. Reagan focused on appointing people who would be lax in enforcing civil rights laws. However, at the end of his presidency, Reagan vetoed the Civil Rights Restoration Act, a bipartisan law prompted by a Supreme Court decision in the Grove City College case. Reagan wasn’t going to run again, and he reverted to his deepest views about civil rights. (Congress overrode his veto.) Some historians make a big deal of the fact that when he was young, Reagan invited a couple of African American football players to stay at his family house when they couldn’t stay at a local hotel, which is certainly admirable. But Reagan had a long record on race as a political leader, over decades, later in his life, and that’s something that no one should ignore.

Q: A lot of younger people, too young to remember the 1980s, don’t know much about Reagan, but they believe he played a big role in ending—and winning—the Cold War. Did Reagan win the Cold War?

DR: Reagan did win the Cold War, but he hadn’t expected to, and his policies specifically didn’t produce the victory. Reagan wanted to take the fight to the Soviet Union, and to the forces of revolution around the world. He thought Jimmy Carter had been too soft in confronting international communism, even though Reagan really just intensified Carter’s policies in Afghanistan, Central America, and Europe. But Reagan did not foresee the Soviet Union collapsing. What he said consistently was that the Soviets had gained a strategic and technical edge in armaments which many Americans believed in 1980. Reagan’s arms buildup, which also amped up something Carter had begun, was massive. It probably didn’t cause the Soviets to become more tractable—which they certainly did after Mikhail Gorbachev took power in 1985. Gorbachev was desperate to get out of the arms race. His country couldn’t afford it, but this had been building for a long time; rather than saying Reagan bankrupted the USSR with his military spending, we would do better to say that U.S. military spending from Harry Truman through Reagan, collectively, bankrupted the Soviets.

Q: So, should credit for ending the Cold War go to Gorbachev?

DR: In making peace and putting the nuclear arms race on a downward trajectory, Gorbachev was the leader, Reagan the follower. Diplomatic historians are pretty united on that point, and with good reason. Reagan ultimately embraced Gorbachev’s proposals—but why wouldn’t he, when Gorbachev was basically offering to surrender in the Cold War? Winning by default is still winning, and that’s what happened in the Cold War’s endgame. What Reagan did with his huge defense buildup was to put America in a position to really throw its weight around militarily once it was the only superpower left. But that didn’t start until George H. W. Bush became president, first in Panama and then in Kuwait.

Q: The commentator Andrew Sullivan likes to say that Barack Obama is “the liberal Reagan.” Is he?

DR: The historian Alonzo Hamby once described Reagan as a conservative “incrementalist.” I don’t know if this is completely true—Reagan had a taste for the big breakthrough policy—but he also settled in for the long slog of pushing back liberal governance on a wide array of policy fronts. I see Obama as a progressive or liberal incrementalist, so there is some similarity. (And, of course, Obama had his own breakthrough policy change with the Affordable Care Act.) Obama is the first president since Reagan, really the first since Lyndon Johnson, with consistently progressive goals, but his methods for achieving those goals are mainly incremental ones, which disappoints some of his progressive supporters.

There are some big differences, however, too—some problems with the idea of Obama as the liberal Reagan. The main one is that Reagan explicitly sold his policies and vision as conservative—he used the word. In contrast, Obama remains, like most liberal Democrats, afraid of using the “L-word.” This is the legacy of Reaganism, which made the term liberal into a radioactive political label. The high point of this was not Reagan’s own campaigns in 1980 and 1984, but Bush’s 1988 campaign against Michael Dukakis. The fear of the L-word remains a specter haunting progressive politics in America. This is the biggest reason that Obama can’t be the liberal Reagan: he can’t make the overt ideological appeal that Reagan did, he can’t sell a doctrine or a political identity (except a post-partisan identity, which has run aground and which of course is starkly different from Reagan’s approach). Instead he sells individual policies and ties them together with softly populist campaign themes.