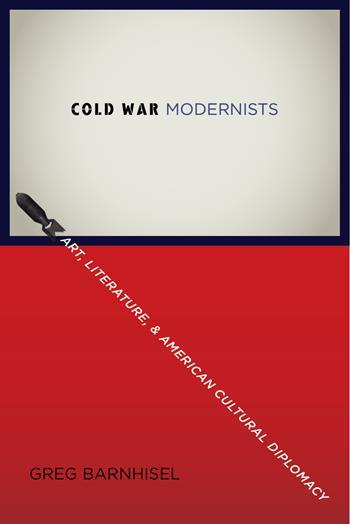 Greg Barnhisel will also be in New York City to talk about the book on Thursday, February 5 at the National Archives at noon and then at the Columbia Rare Book and Manuscript Library at 6 pm.

When the Academy of Motion Picture Arts and Sciences announced its nominees for the 2015 Academy Awards, the James Franco/Seth Rogen comedy The Interview wasn’t on the list. That Oscar spurned this “bromance” surprised nobody. Most critics hated the film and even Rogen’s fans found it one of his lesser works.

Those audiences almost didn’t have a chance to see the film. The Interview, of course, centers on a half-baked but accidentally successful plot to assassinate North Korean leader Kim Jong-un. North Korea, though, didn’t like jokes about the murder of its leader. In one of the most remarkable episodes in the recent history of the entertainment industry, a group of computer hackers calling itself the “Guardians of Peace” (linked later with the North Korean government) infiltrated the computer servers of Sony Pictures, shutting down the studio’s communications and throwing its data open for anyone to see. The “Guardians” demanded that Sony scrap The Interview, and the studio acquiesced if only for a moment.

Apart from some of the obvious questions here—has Hollywood so convinced itself that the Kims are cartoon villains that it thought it could play up the assassination of a sitting foreign leader for laughs? Would a studio greenlight a comedy about the killing of Vladimir Putin or Bashar al-Assad?—this incident evokes the larger issue of the place of art and popular culture in international relations. Does the U.S. really want smirking irony to be the face of our culture? What sorts of art and culture would tell the stories we want to tell foreign populations about who we are?

Currently, two of our greatest foreign-policy challenges (the confrontation with fundamentalist Islamism, and the standoff with an expansionist Russia) have important cultural dimensions. Both Islamism and Putinism put themselves forward to the world as defenders of traditional values, and depict American popular culture as a threat to those values. How should the U.S. respond to this?

Such issues are at the heart of Cold War Modernists: Art, Literature, and American Cultural Diplomacy. As the Cold War began, both adversaries and allies viewed the U.S. as having nothing to offer the world but military and economic domination and a crude, violent, hypersexualized popular culture. American cultural diplomats had to win over skeptical intellectuals in allied nations, and counteract enemy propaganda generated by the Soviet Union that we were just Mickey Mouse and cowboy movies.

Even American politicians were concerned with this. In House and Senate hearings, elected officials worried about the effect of exporting movies like The Blackboard Jungle and Tobacco Road, books like Edmund Wilson’s Memoirs of Hecate County, or trashy paperbacks with lurid covers.

In response, the U.S. offered up not just high culture, but avant-garde high culture. The U.S. government and cultural organizations organized exhibitions full of Abstract Expressionists and non-figurative painting; subsidized publication of American modernist writers abroad; sent William Faulkner on goodwill tours; and asked modernists like William Carlos Williams and Marianne Moore to talk about their hometowns on Voice of America radio.

It worked. By the end of the 1950s, Europeans who had scoffed at the very idea of “American culture” were enthusiastic about its writers and artists, and—perhaps more importantly—about how American art expressed the values of freedom and individualism.

What relevance does “Cold War modernism” have today? Primarily, I would say that what makes popular culture so appealing and satisfying—its snappiness, its immediacy, its ironic comments that so quickly become dated—are also its dangers. Pop culture, whether The Blackboard Jungle or The Interview, is ephemeral. Pop culture seeks a quick and intense response from a broad public; whether that response is rapturous or furious doesn’t matter.

Cold War modernism, by contrast, was aimed at cultural elites, intellectuals, opinion-makers. Strategists in the State Department and Ford Foundation reasoned that once they converted those people, their influence would sway the larger populations. Then, positively disposed toward the U.S., these larger populations would see that America wasn’t just its shallow—but often appealing—pop culture. We sometimes tell ourselves the glib story that Coca-Cola, Levi’s, and Bon Jovi brought the USSR down, but that leaves out decades of careful work by cultural diplomats who won the respect of dissident intellectuals.

Of course, it’s likely that no kind of cultural diplomacy would work with North Korea, whose regime needs to foment periodic confrontations with the West in order to maintain control. Putinism seems to have a similarly cynical basis. The Middle East, though, could be different. For decades, even as our diplomacy supported repressive governments in Egypt and Iraq and Iran, cultural diplomats simultaneously reached out to liberals and intellectuals and—through exchange programs and cultural events and American libraries and the like—earned their admiration. A revival of that program could help the forces of moderation in at least some of those volatile places.