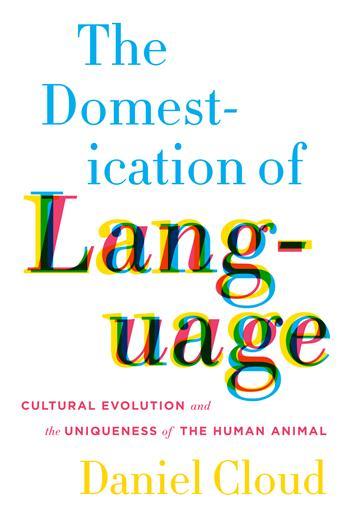 This week our featured book is The Domestication of Language: Cultural Evolution and the Uniqueness of the Human Animal, by Daniel Cloud. Throughout the week, we will be posting content from and about the book and it’s author. Today, we have excerpted parts of “Humans Aren’t Influenced by Culture–We Create It,” an interview with Daniel Cloud that appeared in Quartz. You can read the interview in its entirety here.

Don’t forget to enter our book giveaway for The Domestication of Language!

Quartz: The first chapter of your book discusses the origin of words. If we were to ask the average person, “Where do words come from?” what do you think would be the most common answer?

Daniel Cloud: They’ll think about it carefully for a minute or two and they’ll report out some version of behaviorism. They’ll say, “Well, there must have been two monkeys sitting around, one of the monkeys made a noise every time it did some action, other monkeys came to associate that noise with the action, and then we went on from there.” I think that’s the cultural myth about this. That’s the image of the origin of language that’s been dominant since the Greeks.

Quartz: So according to this idea, the development of language is completely out of our control.

Cloud: Well, that’s one thing that’s wrong with it. It’s not faithful to psychological reality or everyday life. I guess I would call it science fiction. It’s a theory about some events that happened in the distant past, which nobody ever observed, but that seem plausible. Things like that are inevitably just some old bit of philosophy that somebody dredged up.

Quartz: So what is it that’s missing?

Cloud: The problem is that in a model where you’re just responding automatically to some signal, there’s nothing in that story that says anything about your ability to detect lies. If your response is just a conditioned response, you’re hopelessly gullible. What limits animals to using relatively few signals is not that they’re stupid, it’s not that their brains are simple, it’s that they can’t trust each other. We’ve known since the work of Richard Dawkins in the ’60s and ’70s that [trust] is the really big obstacle to animal communication.

The question you’ve got to ask about human communication specifically is not “how did humans get to send each other signals in the first place?”—because even genes do that—the question is “how did we get into a situation where we can trust each other in a way chimpanzees can’t?” That’s the foundation for this whole very unusual thing that humans do.

I think what you really have to do to get an evolutionary theory is look at what people are doing in the present and project it backwards. That’s what Darwin did. And if you look at what people are doing in the present, they mean particular things by words, they use words in a specific sense. If you prod them, they’re willing to say what sense they were using the word in, and there’s this strong feeling of intentional, conscious word choice. You can’t have a theory of the evolution of language that leaves that out. There’s something that just isn’t being explained by the image of us as robots that learn to signal in a mechanistic way, the same way a pigeon could. There’s something that humans are doing that the monkey isn’t doing.

Quartz: The title of your book is “The Domestication of Language.” How is the process you’re describing in language like the domestication of animals?

Cloud: This is just Darwin’s story. I’m just taking Darwin’s story and transferring it over to language. Darwin wanted to prove that evolution happens at all. There was a lot of skepticism about that. So he said, “Just look at how much cows have changed, or how much pigeons have changed, in the last 100 years.” He had the good fortune to live in a society where commercial animal breeding and horticulture were really taking off, and if these people had been able to change long-horned cows into herefords in a couple hundred years, surely natural processes could accomplish the same sort of thing over millions of years. You don’t have a human being making choices about which cows are the best cows; now you have the environment making choices.

Quartz: And this process is self-emergent. No single person is trying to influence the entire species.

Cloud: Exactly. And nobody has an image of a hereford cow in their mind when they start. Darwin’s story is that, before Victorian times, people would just say, “Let’s keep the cows that give the most milk and slaughter the others,” without any realization that they were doing anything else. Over time, they would end up with breeds of cows that would give a lot more milk. We’ve been trying to apply Darwin’s theory to human culture, but we’ve been applying the wrong part. We’re applying the theory of the evolution of pathogens instead of the theory of domesticated organisms.

Domestication of animals is just the tip of the iceberg. The thing that’s been going on for hundreds of thousands of years is the domestication of culture. If you ask yourself what evidence there is of that, what Darwin remarks on over and over again is the tendency for things to become ornamental. People pick the plant that’s a little nicer-looking than the other, and by the end we have big, fancy flowers. The really striking thing in the evolution of human culture—what we can see in the archeological record—is that over the last 400,000 years everything starts to become decorated.

That’s just evidence that culture has been domesticated, because people are choosing to replicate the most beautiful examples. There’s just this human thing of looking for the variant that’s slightly more useful or slightly more attractive. And at the end of that you get the kind of bizarrely complicated—overcomplicated—languages that people speak today.

Read the interview in its entirety here.