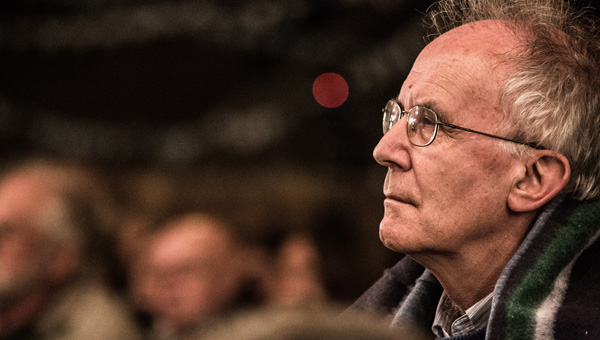 “But just being what you are, to be free within your writing, this is also the center of the real responsibility of the world. Therefore, your freedom is a political act.”—Tomaž Šalamun

We normally reserve Thursday’s to feature a work of fiction but today will focus on poetry and specifically the work of Tomaž Šalamun, whose collection Soy Realidad: Poems is now, finally, available in English from Dalkey Archive Press.

Soy Realidad ranges far from Šalamun’s Slovenia, combining his native language with Latin, French, English, and Spanish, as well as evoking such places as Belize, the Sierra Nevada, and Mexico City. From sex to God, from landscape to literature, Šalamun’s poetry is as ever a restless and witty inquisitor, peeling back the layers of the world.

Below are some excerpts from a fascinating, wide-ranging discussion he had with fellow Slovenian poet, Charles Simic that was originally published in BOMB. In the conversation, Šalamun and Simic, talk about political poetry, the state of poetry in contemporary world culture, and translation:

Charles Simic: Didn’t you also get in trouble over some political poem when you started writing poetry?

Tomaž Šalamun: Yes, this was in ’64. There was a very important cultural literary magazine called Perspektive in Ljubljana, which was battling with the official communist line. Heidegger was translated, Merleau-Ponty, Roland Barthes, Tel Quel’s authors. When they came to the border of being abolished, I was named editor in chief because they wanted to save the journal by putting an innocent young man in the position. And then I published a poem, which I thought was a kind poem, nothing special, but the government ideologues thought the poem itself and the gesture of me being put in charge as editor in chief was so transgressive that I found myself in jail. But the reaction from Le Monde, from the New York Times, from Corriere della Sera was so strong that they just pushed me out of jail after five days. I came out as a culture hero, and it was a very cheap glory. I realized, I have to become a really good poet to earn my fame. (laughter)

CS Was there anything in the poem?

TS It was a line: “Socialism à la Louis XIV.” And in one line: “dead cat.” But I had no idea that the interior minister was named Macheck (Maček), or “cat.” So he took it personally. The really bad years were the mid-’70s, which I think were also the darkest political years in Europe; when Aldo Moro was killed, when Schleyer was kidnapped, when the Brezhnev doctrine was so strong. Coming back from America, from Iowa in 1973, I was annihilated. I couldn’t make any money. The repression from Slovenia on me only stopped because of American PEN. So America really saved me several times.

CS You started out not wanting to be a political poet, right?

TS Yes. But because the system was very sophisticated then, when I came out of jail people from the Secret Service—the Udba—said, “Oh, you lost your steam, you don’t write any protest poems anymore.” My second book, still published by myself, was about butterflies, about nothing. It was more subversive than if I would write protest poems, since the government needed to show its pluralism and democracy. One has to be very precise not to be corrupt or used.

CS Your poems since then, too, have had moments when they would be interpreted politically. Do you think of politics?

TS Well, I was fighting to be free within my writing. And just this was subversive, and therefore political. But, for example, during the Balkan wars, when Brodsky and Milosz were able to write something, I was completely silent. I didn’t write a line of anything from ’89 to ’94. I just stopped writing.

CS It was too depressing. I get upset on almost a daily basis about things going on in the world. But to say, “I’m going to write a poem about the injustice in whatever place in the world” isn’t how it works with me.

TS And I think if you did intend to show that anger or depression, you wouldn’t be able to write good poetry. But just being what you are, to be free within your writing, this is also the center of the real responsibility of the world. Therefore, your freedom is a political act….

CS (laughter) When I became Poet Laureate, the first people to interview me were the big television stations: ABC, NBC, the usual places. The reporters would say, “How’s it being a poet laureate in a country where nobody reads poetry?” I didn’t say what I wanted to say: “You’re full of shit.” Instead, I would say, “In this country there isn’t a college or a university that doesn’t have a poetry reading series or hasn’t had one for 20 or 30 years.” I’ve been in the audience when you’ve given a reading, Tomaz, and your poems are original and not the easiest to follow and yet, I never had the impression that the audiences had any problem with them.

TS Absolutely. But I’d be nowhere without my friends, specifically you, because you put me on the map. In 1984 I went to a seer with a young Slovenian poet, Aleš Debeljak, and the seer said to me, “The letter will come from the country where you already spent a lot of time. A friend will write you a letter that will change your life.” And she started to describe you exactly. I knew who she was describing. And in 1986 you wrote me a letter: “I met Bob Hass and we talked about you, and we talked to Dan Halpern; he will do the book.” And this book of my selected poems, published in 1988 by ECCO Press, changed my life.

CS Well, you really have a huge following among younger poets.

TS Because of this support. And I had another generation that was interested in my work. I am one of the luckiest European poets; I’m incredibly grateful for how I am treated in America. It’s almost unbelievable.

CS According to a mutual friend and editor, your books also sell well in this country.

TS Well…relatively. (laughter) I’m looking at Amazon. You sell well and Bob Hass sells well, but translations don’t sell well. But maybe enough that I can hope to go on. By now I have 10 American books, and there are not many living European poets who have this.

CS There’s a question I’m very curious about: do you think American poetry is changing?

TS Yes, American poetry is constantly changing. So many poets disappear, the scene changes, yet it remains immensely strong. It’s also much more healthy compared to visual arts, where curators are terrorizing artists. They don’t allow paintings anymore. Poetry is much more honest, much more healthy.

TS In Slovenia I’m very lucky to be accepted by America and the world, translated a lot, so allowed to go on with my new books. I was lucky to be able to be a bridge. For example, Richard Jackson and his students have been coming to Slovenia and we have two international festivals: Vilenica and Medana. Slovenian poetry is very present in the United States, and American poetry is very present here, more so than in Germany, for example….
CS Tell me about your own work as a translator. You translate your own poetry?

TS As a writer, I’m a moonwalker. I don’t know what I’m doing. As a translator of my own poetry, I just do it like a lumberjack with a dictionary and try to be accurate and precise. I mostly have to translate myself, because I write only in Slovenian.

CS I’ve never translated myself. I’m always amazed that somebody actually makes the effort to translate me. I mean, I have translators in a number of places, people I’ve never met before, who translate me Into Arabic, Spanish, Norwegian, Hungarian. A labor of love, I suppose.

TS Yeah. I remember I was very sad when I translated your selected poems into Slovenian and I was doing it slowly, slowly. It seemed easy, but it didn’t really work—I was not satisfied until the end, and then I don’t understand what happened. But after half a year of not working on your translation, I spent maybe 10 days on it, made changes, and it worked. And I was very happy.

CS I think that has to be the way one works on these translations. I’ve had the same experience many, many times. There’s a simple explanation for this. One is always looking for some equivalent, a language that, in some way, approximates what is being said in the original. And very often you just don’t think of the right words or the right idiom at the time.

TS I try to be as direct as I can, as literal as I can. I still remember how Marguerite Yourcenar, for example, translated Catullus. It was as if she would read the page, and then she would do something else on her own. It’s a French tradition of translation. German tradition is very different. Slovenians translate more like Germans. It all depends, but I am afraid of those translators who think that they can improve, or use the other language to do it another way. Usually it doesn’t work.