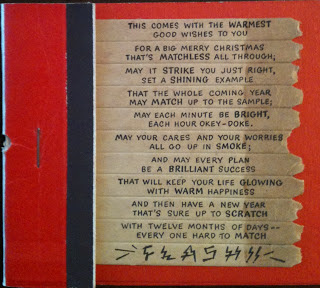 In the following post, Mike Chasar, author of Everyday Reading: Poetry and Popular Culture in Modern America, explores the ways in which a poem related to a Coca-Cola holiday promotion exposes how the commercial and non-commercial aspects of the holidays are intertwined. (This post was cross-posted on Mike Chasar’s blog Poetry and Popular Culture (P&PC))

Nothing dogs the Christmas season at P&PC so much as the clash between the holiday’s commercial and non- commercial aspects—between shopping and spirit, getting and giving, worldliness and wonderment, materialism and, well, something more. This clash dogs the season’s poetry, too, as the oftentimes utopian (or at least not uniformly materialist) sentiments voiced by the season’s popular verse forms get standardized, mass produced, boxed, wrapped, shipped, and sold in and on any number of greeting cards, ornaments, advent calendars, and novelty items like the funky oversized matchbook from Hallmark (see above). For every excuse that the season offers to poetically express feelings one might view as suspect or inappropriate the rest of the year—you know, faith in ideals like love, peace, family, compassion, giving, forgiveness, and the pursuit of something other than the cynical status quo—there’s some Grinch waiting to package, market, and profit from it all.

But because we all know that the commercial and non-commercial aspects of the holidays aren’t inevitably partnered with each other—that’s not the way is has to be, right?—the marketplace has to continually entangle and re-entangle them, making the contradictions between them seem natural (even at times, like, totally fun), or else so interweaving them that it becomes nigh impossible. 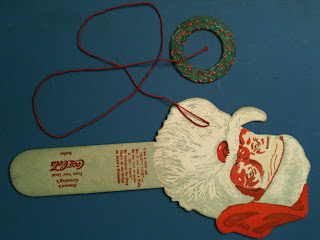 It’s easy, perhaps, to see this logic at work in the big picture (“Welcome to the Spirit of Christmas Online Store!”), but it’s remarkable how much it sometimes governs—to quote Robert Frost, who for nearly thirty years partnered with printer Joseph Blumenthal to make Christmas cards for friends and associates—in a thing so small as the little artifact pictured here: a Santa “ring toss” game issued as a holiday giveaway by Coca-Cola in the 1950s that contains the following poem on its handle:

I am a Jolly old
“SAINT NICK”—
So, if you want a Kick,
Be the first to make
A “Hit – Smash”
By swinging the Ring
That’s on the String
on Santa’s Mustache

If you look closely, you’ll see that even though the verse is printed pretty clearly in red ink (it looks over-inked, in fact), some of that ink (especially in lines three and four) has been worn away, because, in order to play the game, one has to hold the handle in such a way that one’s thumb braces the toy just beneath Santa’s beard and thus covers up and, over time, starts rubbing out the poem. This little shell game—where one reads the poem one moment, then covers it up the next—illustrates in miniature how the ring toss operates more generally: look at it one way, and it’s a noncommercial, greeting-card-like wish for a happy holiday (“Seasons’ Greetings from your local Coca-Cola Bottler”); look at it another, and it’s an advertisement. One minute, the scripted logo “Coca-Cola” seems like the signature we expect on a holiday card from a friend, and the next it’s a standard-issue corporate logo. The details signify doubly, as the toy appeals to noncommercial expressive forms of the season to forward its otherwise commercial goal.

In fact, the whole idea of a ring toss itself seems designed to give us practice combining things that we normally wouldn’t think of combining, doesn’t it? In a sense, by doing what the poem tells us to do—“By Swinging the Ring / on Santa’s mustache”—we get to play around in a nonthreatening way with joining things that usually wouldn’t go together (a wreath on Santa’s mustache? C’mon), thereby experiencing the entanglement of the holiday’s commercial and noncommercial aspects as a game, not as the work of ideology. This is why P&PC thinks the ring toss instructions have to be in rhyme: pairing words based on what are really arbitrary acoustic similarities between them is a linguistic variation of the game as a whole: bringing “Ring” and “String” together in a playful, low-stakes way is another version of landing the wreath on Santa’s mustache. Both let the user simulate and view as natural the larger ideological project of entangling the commercial and noncommercial aspects of the holiday season. 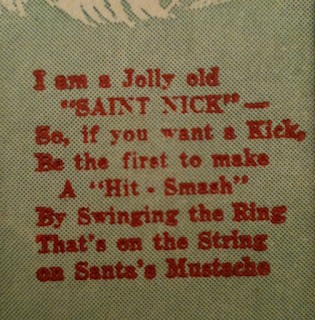 From the toy’s design that lets us physically practice reconciling the season’s contradictions, to the rhyme that invites and instructs us how to do so, all the way down to the oxymoronic name of its patron devil-saint, Coca-Cola’s ring toss so intertwines opposing forces in the service of partnering the commercial and the noncommercial that try, try, try as we might to separate them, it seems nearly impossible to do so.

And yet, despite this conundrum, there’s a flaw or contradiction in Coca-Cola’s ring-toss—just as there is in every product of ideology— and that’s in the playing of the game itself. The P&PC interns have been passing it around the office for several days now, but do you know how often they’ve actually managed to get that wreath on Santa’s mustache and thus successfully resolve the clash between the holiday’s commercial and noncommercial aspects as Coca-Cola hopes? You got it—hardly ever. Maybe there’s hope for us yet.