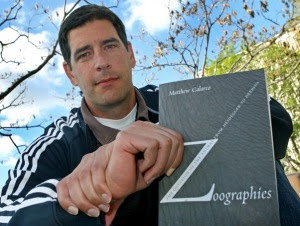 Continuing our week-long focus on debates within animal studies, we wanted to spotlight a recent interview with Matthew Calarco, author of Zoographies: The Question of the Animal from Heidegger to Derrida, that was posted on On Human-Nonhuman Relations.

asks us to construct alternative concepts and alternative ways of thinking that no longer trust uncritically the categories and distinctions that have structured the dominant culture’s ways of thinking and living up to this point. This is a much more modest approach to thinking about animals, and it is one that proceeds with a keen awareness of the pitfalls of creating clean and distinct ontological and ethical lines between human beings and animals.

Calarco is asked whether this approach undermines the efforts of human social justice movements that have sought to protect groups that have been deemed “less-than-human.” While he is aware of the potential pitfalls of his approach, Calarco also cites a variety of movements (for animals and humans) that have taken an alternative, more continental approach.

Rather than playing the old game of determining human propriety and then stretching it to include or exclude this being or that being, these groups [queer struggles, feminist groups, indigenous peoples, anti-racism and decolonization struggles, alter-globalization activists, radical environmentalists, and so on] are asking us to push back against that game and eventually exit it altogether. I place my work within, alongside, and in support of those struggles. So, my work is not aimed at undercutting the humanist progressive struggles for social justice that I mentioned above; instead, it is aimed at deepening and radicalizing them in the name of those who continue to be marginalized by the established anthropocentric order.

The interview concludes with Calarco explaining his own rationale about becoming a vegan and how this political and ethical decision was motivated by far more than what or what not to eat:

The established order that seeks to reduce animals to “mere” meat is extraordinarily powerful and is constituted by a series of economic, legal, ontological, and other innumerable systems and institutions that cannot be taken down (or even seriously reformed) through individual or collective acts of vegan eating.

Veganism of the sort I am talking about here needs to go well beyond a change in eating habits and must extend to a reflection on and radical transformation of everything from transportation (think of the massive death, suffering, and habitat fragmentation associated with roadkill, railkill, and airkill), to energy usage (every step of the process of extraction, processing, and end use of fossil fuels and even “renewables” is fraught with harm to animal lives and habitats, not to mention the innumerable harms caused to animals through climate change), to architecture (our cities, towns, and general infrastructures for living are built with very little to no consideration of animal well being) to waste, to our collective use of and impact on water, soil, air, and other aspects of the material world that compose animals’ environments.