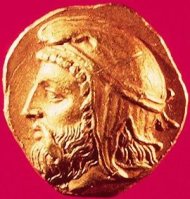 What had a greater impact on business, the Iron Age or the invention of coinage? What might these developments tell us about more recent historical changes such as globalization or the computer revolution? These are the issues that Keith Roberts, author of The Origins of Business, Money, and Markets, explores in a recent op-ed in Forbes.

Roberts argues that an understanding of Ancient History gives us a better understanding of the impact of change over time and its effect of business and economies. While the political importance of the Iron Age cannot be denied, Roberts suggests that its impact on business, despite its ability to create wealth, was limited.

Roberts compares this with the invention of coinage in Ancient Greece during the late seventh century. Roberts writes:

As sales for money replaced barter, economic exchange became faster and more frequent. Monetary prices improved information about values and supply and demand, reducing risks for traders and vendors. Their wares then became more available, stimulating consumer demand. An entrepreneurial market economy became a defining feature of Greek urban life. Later, the conquests of Alexander the Great and the Romans brought market economies to towns and cities throughout the western world.

The difference between the impact on business of the Iron Age and of coinage cautions us to ignore the “shock and awe” of change as a general proposition and focus on the practical details of exactly how a change works in reality.