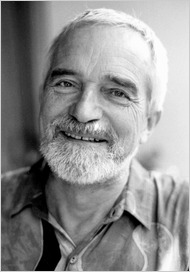 We were very saddened to hear of the recent death of Robin Wood one of the most influential critics and scholars of Hitchcock and other directors such as Howard Hawks and Arthur Penn.

We were fortunate to have the opportunity to publish three of Wood’s books: Hitchcock’s Films Revisited, Hollywood from Vietnam to Reagan…and Beyond, and Sexual Politics and Narrative Film: Hollywood and Beyond.

Wood became known for his path-breaking critiques of Hitchcock, one of which was published in Cahiers du Cinema and helped to launch his career. The obituary in the New York Times, quotes Wood on the importance of that article and how and why he became a film critic:

I began to realize that all of these films that I had loved in the past could be taken seriously, that some real artistic claims could be made for them,” he told Your Flesh magazine in 2006. “That was a revelation, and really all I needed to understand. So it was purely from that article in Cahiers that I became a film critic. I think if they had turned it down, I probably wouldn’t have written about film anymore, and I would probably still be an English teacher today.

His later work, including those published by Columbia, focused increasingly on politics and he saw writing as film as a way to “contribute, in however modest a way, to the possibility of social revolution, along lines suggested by radical feminism, Marxism and gay liberation.”

However his ideological interests did not detract from his ability to write elegantly and perceptively about film. In reviewing Hollywood from Vietnam to Reagan, Film Comment wrote that the book, “is one of the most impressive demonstrations by a film critic that ‘to be political is to avoid the trivial.’ . . . Wood’s writing is rich, eloquent, and illuminating. If our culture is indeed facing the possibility of imminent extinction, his is an essential contribution to it.”

Wood continued however, to be fascinated by Hitchcock. From the Times obituary:

[Wood’s] enthusiasm for Hitchcock never flagged. In 1989 he returned to the subject in “Hitchcock Revisited,” appraising the director from new angles but maintaining his admiration. “I think the best of Hitchcock films continue to fascinate me because he’s obviously right inside them, he understands so well the male drive to dominate, harass, control and at the same time he identifies strongly with the woman’s position,” he told the World Socialist Web Site (wsws.org) in 2000. Hitchcock’s films, he continued, “are a kind of battleground between these two positions.”