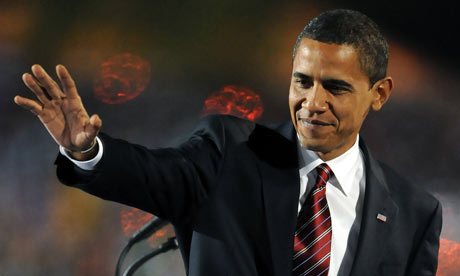 Over the weekend, the Guardian’s blog Comment is Free asked various experts about Obama’s performance a year after being elected president. Contributors to the forum include Patricia Williams (on race), Robert Barro (on the economy), David Landau (on the Middle East), and Jessy Tolkan (on the environment)

Assessing Obama’s policy on Pakistan is Farzana Shaikh, author of Making Sense of Pakistan. Here’s what she wrote:

Good for the world, but not for Pakistan

In the midst of the worldwide euphoria that greeted the election of president Obama, one commentator in Pakistan struck a note of caution. Obama might be good for the world, but he could be bad for us. A year on, those words have come back to haunt Pakistan’s long troubled relations with the United States. For even as President Obama basks in the warm glow of international endorsement, his stock has fallen sharply in Pakistan.

There could be no clearer demonstration of this than the visit this week by US secretary of state, Hillary Clinton. Billed as a concerted diplomatic offensive to woo an increasingly hostile Pakistani public, Clinton has since headed home nursing wounds inflicted by a series of bruising encounters with angry Pakistanis. Opposition politicians, students, journalists, religious groups and tribesmen – all rounded on her, outraged by a war they believe has been foisted on them by the United States and by the unjustifiably high price it has exacted from their country.

Indeed, it is precisely the fair price that Pakistan expects from the United States in exchange for its support that is at issue. Obama appeared to understand this. Within weeks of taking office he oversaw one of the most ambitious US economic and social aid packages ever devised for Pakistan under civilian administration. Totalling an estimated $7.5bn over five years, it was recently passed by Congress as the Enhancement Partnership with Pakistan Act of 2009.

The widely anticipated legislation, initially welcomed by many Pakistanis as evidence of Obama’s positive engagement, has since been strongly condemned by them. Criticism has focused on a set of so-called “conditionalities” attached to the US aid package. Judged to be an infringement of Pakistan’s national sovereignty, they require Pakistan’s military to be brought under “effective civilian control”, militant bases on its territory to be dismantled and the rules of the international nuclear non-proliferation regime to be respected.

Although these terms are no different from the stated objectives of Pakistan’s current leadership, the prevailing climate of bitterness has reinforced the impression that the US is meting out shabby treatment to a key ally. Anti-US sentiment has been additionally fuelled by opposition to the US aid package from Pakistan’s military high command. Long accustomed to privileged treatment from the US, it has taken a dim view of Obama’s perceived attempts to get its soldiers to wage “America’s war” on the cheap.

But this is not to say that Pakistan or indeed its military, necessarily expected Obama to dole out more money as evidence of a fair price for the country’s support. At least as important was the expectation that Obama would, unlike any of his predecessors, seriously address Pakistan’s security concerns vis-à-vis India. There were high hopes that Obama’s robust regional approach to the conflict in Afghanistan would yield dividends by persuading India to settle its dispute with Pakistan over Kashmir. Those expectations have long since disappeared. Yet there is no doubt that for many Pakistanis the prospect of real peace with India would have been not only a fair price, but a price worth paying for a war not of their making.

There is no question that Pakistan has become more prominent in President Obama’s foreign policy priorities. A sense that he favours an ‘even-handed’ approach with India would help smooth diplomatic feathers and strengthen his regional policy.