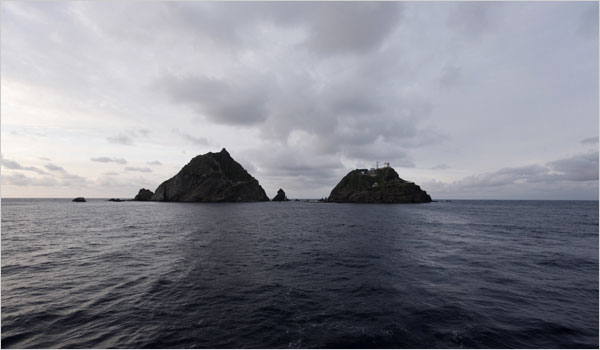 “Although not immediately foreseeable, the results of [the Bush administration’s] move hold the potential to make the Falklands War look like child’s play.”—Alexis Dudden, JapanFocus

As has been reported in the New York Times and elsewhere, the question of sovereignty concerning a group of barely inhabited islands, no bigger than Central Park, are causing a great deal of tension between South Kore and Japan.

However, as Alexis Dudden, author of Troubled Apologies Among Japan, Korea, and the United States, points out in a recent article in JapanFocus, the United States has also played a role in the heightening tension between Japan and Korea. In the article, Dudden looks at the implications of the Bush administration’s decision to designate the the islands as of “undesignated sovereignty.” This caused great consternation among the Koreans, who have administered the islands for six decades and view the islands as their own. In fact, the dispute has led to emergency mid-flight phone calls to Condoleeza Rice

In the article, Dudden also explores how Bush’s decision reverses the U.S. long-standing policy regarding the islands and has led to an exacerbation of the historical tensions between Korea and Japan.