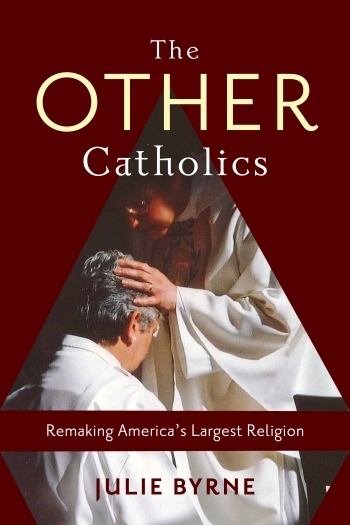 Read “Sunday Dinner with Pope Francis,” by Julie Byrne at the Huffington Post. In her article, Byrne addresses Pope Francis’s views on the role of women in the Catholic church:

I loved the pope’s recent statements on climate change, capitalism, annulments and so much more. I read the pope’s letter granting priests faculties to forgive women who confess to abortions during the upcoming Holy Year of Mercy. It is an extraordinary gesture to absorb among American Catholics, whose bishops made anti-abortion activism the overweening political concern for years, even as Catholic rates of abortion are higher than that of the Protestant population.

In an article at faithstreet’s OnFaith blog, Byrne examines how Catholicism became “All pope, all the time”:

Still other Catholics questioned the need for a pope at all. This was not just a Protestant idea. Catholic “conciliarists” proposed that councils of bishops, not the pope, properly governed the church. Some conciliarists voted with their feet, organizing new Catholic churches that kept apostolic succession, seven sacraments, and devotion to the saints, but not a pope.

Publisher’s Weekly calls The Other Catholics a “probing study”: “Byrne’s enlightening research and analysis will undoubtedly raise awareness of these little-known Catholic denominations.”

At America Magazine: The National Catholic Review, Nathan Schneider has a great profile of Byrne and her new book: “The Compromise That Binds.”

For Byrne, a friend and occasional collaborator of mine, her decade-long sojourn in independent Catholicism has been personal as well as academic—“partly an attempt,” she told me, “to see a broader range of answers to questions about what it means to be Catholic.” She has come to recognize these non-Roman Catholic communities less as outliers than as integral parts of American Catholic culture as a whole. They are labs for experimentation and preservation, places of refuge for the adrift. They offer Communion and marriage to people Roman canon law has turned away. In many places, Byrne has found, Roman and independent pastors maintain good working relationships—albeit quiet ones.

Read an additional bibliographic essay and list of works cited in The Other Catholics by Julie Byrne on the Columbia University Press website.