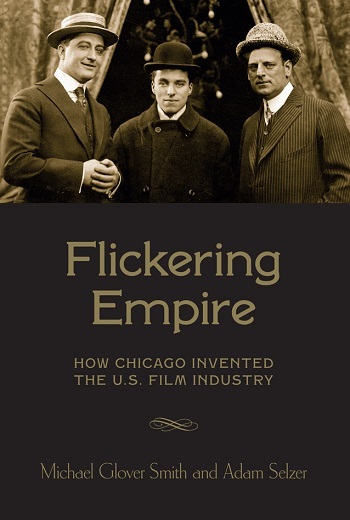 “A lot of innovations came out of Chicago. There were a lot of ‘famous firsts’ for the American film industry and for movies as an art form—including the first pseudo-documentaries, the first two-reeler, the first slapstick comedy to feature a ‘pie-in-the-face-gag….'”—Michael Glover Smith

The following is part 1 of our interview with Michael Glover Smith, co-author of Flickering Empire: How Chicago Invented the U.S. Film Industry:

Question: Why does Chicago get left out of the history of early cinema in America?

Michael Glover Smith: The story of American film production begins in New York and New Jersey (where Thomas Edison was headquartered) in the late 19th century. Hollywood didn’t really become the nation’s film-producing capital until about 1915. All official histories are somewhat reductive and I think it’s been convenient for scholars and historians to just skip over the story of Chicago’s contributions to film history, which mainly occurred in in the late 1900s and early 1910s. Even though the contributions of Chicago filmmakers were enormous by any objective standard, it was a fairly narrow window of time when the film industry in Chicago was at its peak and, also, the vast majority of Chicago-made films of that era no longer exist. They’ve been destroyed or lost and it’s never been fashionable to write about films that people can’t see.

Q: How does Chicago’s role in the development change the way we think about the history of movies in America?

MGS: I think a lot of innovations came out of Chicago. There were a lot of “famous firsts” for the American film industry and for movies as an art form—including the first pseudo-documentaries, the first two-reeler, the first slapstick comedy to feature a “pie-in-the-face-gag,” the first films made by African-American directors, etc. We give a rundown in the introduction to the book. It’s entirely possible that movies as we now know them would look very different if not for the contributions of studios like Essanay and Selig-Polyscope and also the independent filmmakers (especially the aforementioned black directors).

Q: What was the role of the 1893 Columbia Exhibit in popularizing film in Chicago and the rest of the country?

MGS: The World’s Fair of 1893 had an enormous influence on the developing film industry. There were several important prototypical movie-exhibition devices that premiered there—including Eadweard Muybridge’s Zoopraxiscope and Otto Anschutz’s Tachyscope. A lot of the early Chicago filmmakers went to the Fair and were inspired to start making films based on what they saw.

Q: Your book provides a somewhat unflattering view of Edison. His role in the development of film is well known but how does your book change our perspective on Edison’s contribution?

MGS: At the time of his death, Edison was widely credited as being the man who “invented movies.” In the 80+ years since then, many scholars have come along and done invaluable research in order to give the other early film pioneers their due. If anything, Edison is seen today as almost a villain of history—frequently pitted against the visionary genius Nikola Tesla, his former employee (who, of course, was broke and forgotten at the time of his own death). Edison’s positive contributions to the cinema are actually not very well-known today. He made sure, for instance, that all of the movie theaters that were licensed to show his movies had fire insurance, which was considered a remarkably progressive move in the early 20th century. But he was also hogging patents and filing lawsuits left and right. He was a complex guy and I think our book offers a balanced portrait.

Q: Another famous person who is featured in your book is Charlie Chaplin. What did Chicago have to do with his rise to stardom?

MGS: Chaplin’s tenure at Essanay was a crucial stepping stone in his career. He had written, directed and starred in films for Keystone Studios in Los Angeles in 1914 but was lured to Chicago by Essanay at the end of the year because they offered him “carte blanche” to do what he wanted. The only film he actually made in Chicago was His New Job, his first film for Essanay. It’s a very funny slapstick comedy but I also think it’s more mature from a filmmaking standpoint than what he had done at Keystone. There are some elegant tracking shots in it and there’s a great moment that combines humor and pathos (which would later become his trademark) where his “Little Tramp” character pleads for his leading lady not to leave him. After making His New Job, Chaplin fulfilled the rest of his Essanay contract at the company’s studio in Niles, California. He thought Chicago was “too damn cold.”