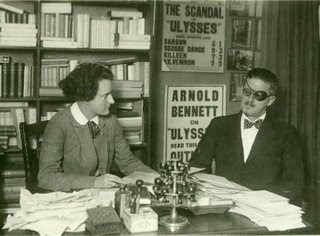 We continue our focus on Bloomsday with Keri Walsh’s recent and fascinating interview on Writers & Company. In the interview Walsh, the editor of The Letters of Sylvia Beach, discusses Syliva Beach and her remarkable relationship with James Joyce. Beach was of course the first publisher of Ulysses and coined the term “Bloomsday.”

As Walsh explains in many ways the relationship between the “respectable” Beach and Joyce was unlikely. However, there was a spark between the two of them that made them believe that made them see themselves as a team that could publish Ulysses. Walsh, who was undoubtedly taken in by Joyce’s charm, also realized that Ulysses would become the defining work of its generation.

Beach’s decision to publish Ulysses required a great deal of sacrifice on the part of Beach, who had to endure Joyce’s countless revisions and risk prosecution by smuggling the book into the United States to avoid censors. Ultimately, their relationship cooled after Beach handed over the copyright to Ulysses however, it remains one of the most extraordinary relationships between author and publisher.